Who are the Sentinelese? 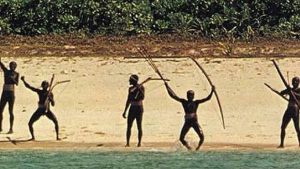 Why in News? An American national was killed allegedly by the Sentinelese tribe in the Andaman and Nicobar Islands after he illegally entered the protected zone on November 16.

Who are the Sentinelese?

The Sentinelese are a negrito tribe who live on the North Sentinel Island of the Andamans. The inhabitants are connected to the Jarawa on the basis of physical, as well as linguistic similarities. Their numbers are believed to be less than 150 and as low as 40.

Based on carbon dating of kitchen middens by the Anthropological Survey of India, Sentinelese presence was confirmed in the islands to 2,000 years ago. Genome studies indicate that the Andaman tribes could have been on the islands even 30,000 years ago.

How are they protected?

The Govt. of India issued the Andaman and Nicobar Islands (Protection of Aboriginal Tribes) Regulation, 1956 to declare the traditional areas occupied by the tribes as reserves. It prohibited entry of all persons except those with authorisation. Photographing or filming the tribe members is also an offence. The rules were amended later to enhance penalties.

But restricted area permits were relaxed for some islands recently. In a major step earlier this year, the Indian government excluded this island and 28 others in the Union Territory from the Restricted Area Permit or RAP regime till December 31, 2022. The lifting of RAP means foreigners can go to the island without permission from the government.

Why are they said to be vulnerable?

It is said they have made little to no advancement in the over 60,000 years and still live very primitive lives, surviving mainly on fish and coconuts.

RAP regime was notified under the Foreigners (Restricted Areas) Order, 1963.

Context: The government has launched the ‘Institution’s Innovation Council (IIC) program under Innovation cell of MHRD.

The educational advancement in higher education can only be achieved by encouraging best practices in innovation and advance research and Innovation Cell has undertaken many initiatives in this direction such as implementing programs like Atal Ranking of Institutions on Innovation Achievement (ARIIA), Smart India Hackathon (SIH)- 2019, etc.

Ministry of Human Resource Development has established an “Innovation cell” at AICTE with a purpose to systematically foster the culture of Innovation in all Higher Education Institutions (HEIs) across the country.

e-registration must for jobs in 18 countries 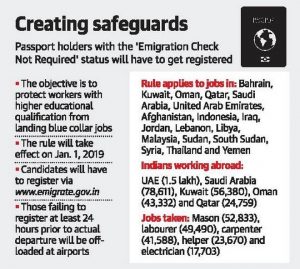 Statistics available with the Ministry of External Affairs showed that UAE is one of the five top destination countries for Indians taking up employment. Nearly 1.5 lakh Indians had taken up employment in that country last year. This was followed by Saudi Arabia (78,611); Kuwait (56,380); Oman (43,332) and Qatar (24,759).

Topic: Science and Technology- developments and their applications and effects in everyday life, nanotechnology and biotechnology.

Antimicrobial resistance (AMR) is a major public health challenge, and with very few new antibiotics in the pipeline, it is important to use the existing drugs judiciously. Since inappropriate use of antibiotics is rampant in India, there is an urgent need to improve antibiotic use in hospitals, which can be achieved through implementation of good AMS programmes.

The guidelines and their significance:

What is Antimicrobial resistance and why is it on rise?

For Prelims and Mains: What is COP and Global Stocktake?- features and significance, role of developed countries in assisting developing countries in environmental protection, BASIC Nations and their significance.

Context: Ahead of the UN climate conference in Poland next month, the BASIC (Brazil, South Africa, India and China) group recently met to put pressure on developed countries to meet pre-2020 climate efforts, and to “progressively” and “substantially” scale up their financial support for future action.

What is Global Stocktake?

‘Global stocktake’ refers to a proposed five-yearly review of the impact of countries’ climate change actions.

Under the Paris Agreement, every country must present a climate action plan in five-yearly cycles. It is supposed to be similar to the plan countries submitted in the run-up to the talks that concluded last week.

Under the Paris Agreement, the first global stocktake will happen in 2023. It will assess whether the net result of the climate actions being taken was consistent with the goal of keeping the increase in global average temperature from pre-industrial times to within 2 degree Celsius. The stocktake will help the world determine whether it needs to do more — and how much more.

While every country is required to participate in the global stocktake, the exercise will not assess whether actions of any individual country are adequate or not. It will only make an assessment of the “collective” efforts of the world. That is because the climate actions are supposed to be “nationally determined”, and nations have problems over being told by others what they should do. The stocktake will not go into who should do how much — and will rather focus on what needs to be done.

In accordance with the demands of developing countries, the stocktake will cover not only the results of actions to reduce greenhouse gas emissions but of actions being taken to adapt to the effects of climate change as well. It will also include an assessment of whether developed countries are offering adequate help to developing countries by providing money and technology, as mandated by the Paris Agreement.

BASIC countries are bloc (geopolitical alliance) of four large newly industrialized countries – Brazil, South Africa, India and China. It was formed by agreement in November 2009. They were committed to act jointly at Copenhagen climate summit 2009, including possible united walk-out if their common minimum position was not met by developed nations during climate talks. 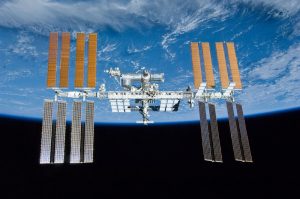 For Prelims and Mains: All about ISS, its significance and accomplishments.

The International Space Station is a large spacecraft in orbit around Earth. It serves as a home where crews of astronauts and cosmonauts live. The space station is also a unique science laboratory. Several nations worked together to build and use the space station. The space station is made of parts that were assembled in space by astronauts. It orbits Earth at an average altitude of approximately 250 miles. It travels at 17,500 mph. This means it orbits Earth every 90 minutes. NASA is using the space station to learn more about living and working in space. These lessons will make it possible to send humans farther into space than ever before.

How Old Is the Space Station?

How Big Is the Space Station?

The space station has the volume of a five-bedroom house or two Boeing 747 jetliners. It is able to support a crew of six people, plus visitors. On Earth, the space station would weigh almost a million pounds. Measured from the edges of its solar arrays, the station covers the area of a football field including the end zones. It includes laboratory modules from the United States, Russia, Japan and Europe.

Why Is the Space Station Important?