Insights into Editorial: Another orbit: on GSAT29 launch 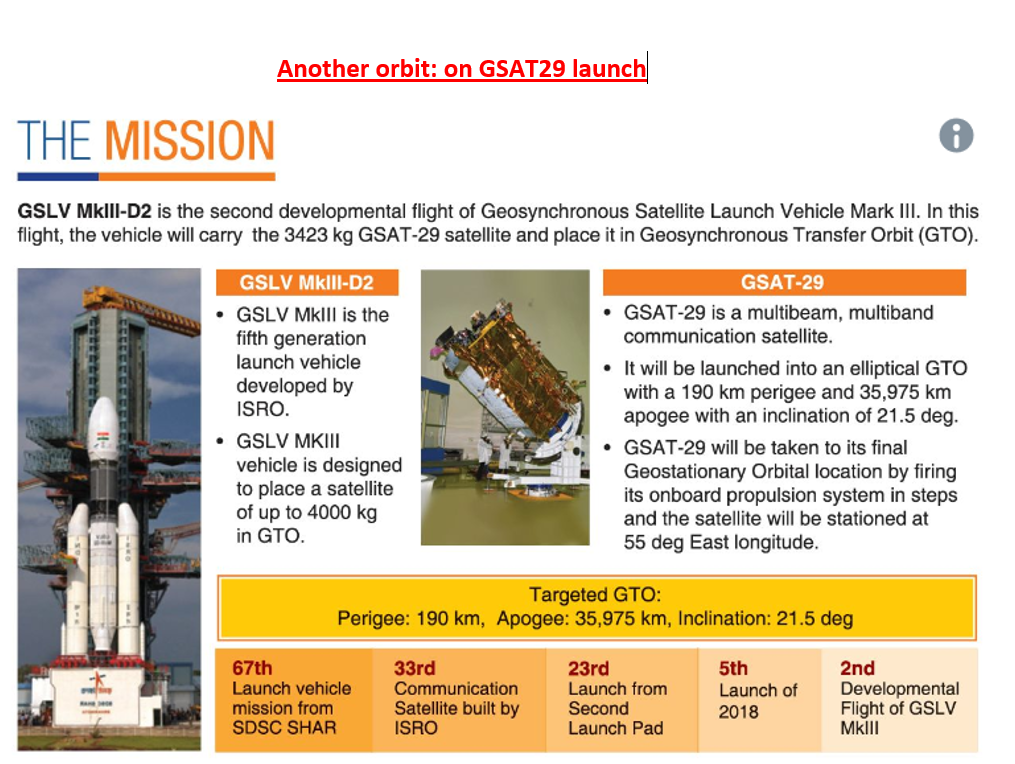 The Indian Space Research Organisation has marked a big milestone by successfully testing its heavy-lift launcher while launching an advanced communication satellite.

The Geosynchronous Satellite Launch Vehicle MarkIII (GSLV MkIII) launched GSAT29, an advanced communications satellite, into a geosynchronous transfer orbit where the satellite’s closest approach to earth would be 190 km and the farthest 35,975 km.

Work of GSLV-MkIII and GSAT-29:

According to ISRO, the GSAT-29 satellite is intended to serve as a test bed for several new technologies. It is specifically designed to cater to communication requirements of users from remote areas of the country. The mission life is about 10 years.

GSLV-MkIII is the fifth generation launch vehicle developed by ISRO and is designed to place satellites of up to 4,000 kg in GTO.

The heavy lift launcher is going to be used for Chandrayaan-II in early 2019.

Ku-band and Ka-band payloads are configured to cater to the communication requirements of users including those from remote areas especially from Jammu & Kashmir and North-Eastern regions of India.

The Q/V-Band communication payload onboard is intended to demonstrate the future high throughput satellite system technologies.

A high-resolution camera will be demonstrated at the higher geostationary orbit (GEO) of around 36,000 km for the first time. GEO satellites orbit along the equator and appear ‘fixed’ at a point over the country.

The Geo High-Resolution Camera to aid in high-resolution imaging. For the first time, an optical communication payload will be utilised for data transmission at a very high rate.

Earth imaging cameras are put on remote-sensing satellites that orbit Earth at around 600 km, in polar orbits.

GSAT-29 said the launch will help to bridge the digital divide.

The success of GSLV MkIII-D2 marks an important milestone in Indian space programme towards achieving self-reliance in launching heavier satellites.

The first successful experimental flight of the GSLV Mk-III was in 2014, when it carried a dummy crew module as a payload. Its first developmental flight was in 2017 on June 5, when it launched GSAT-19, weighing 3,136 kg.

This is the second developmental flight and with these two launches, the Launcher is declared operational and now PSLV and GSLV are operational.

ISRO successfully tested GSLV Mk-III, which is called Launch Vehicle Mark-3 (LVM-3) in an experimental flight in December 2014. It also launched the first developmental flight of LVM-3, which carried GSAT-19 in June 2017.

This is on the GSLV’s third stage. It uses liquid hydrogen as fuel and liquid oxygen as oxidiser. In the liquid form, they give high amounts of energy per unit mass, due to which the amount of fuel to be carried decreases.

Hydrogen and Oxygen are clean fuels and when they combine, only water is produced. These are economical as liquid oxygen costs less than gasoline.

It is highly efficient rocket stage that gives more thrust for every kg of propellant it burns, compared to solid and Earth storable liquid propellant stages.

The impulse achievable with Cryo fluids is 450 secs, compared with 300 secs for other fuels.

Some of the recent achievements by ISRO:

The multi-band, multi-beam satellite can cater to the communication needs of people in Jammu and Kashmir and the Northeast.

ISRO scientists had termed the launch crucial for the space agency as the rocket would be used for the ambitious Chandrayaan-2 and the country’s manned space missions.

The Government recently approved the funding for the next 10 flights of GSLV Mk-III at an estimated cost of Rs 4,338 crore. This is supposed to take care of GSLV Mk-III missions till 2024.

The GSLV MkIII has not just boosted the satellite into its orbit, but also restored morale at ISRO, which had been dented by the GSAT 6A setback.

Future space exploration will require us to inhabit the moon, initially, and later Mars. This is a humongous task for any one nation to carry out.

Cooperation amongst space-faring nations will become essential and the ISS experiment is a good proof of this concept. Going forward, we must begin utilizing and leveraging each other’s strengths for common benefits.