Insights into Editorial: Ripples of discord: on gravitational waves 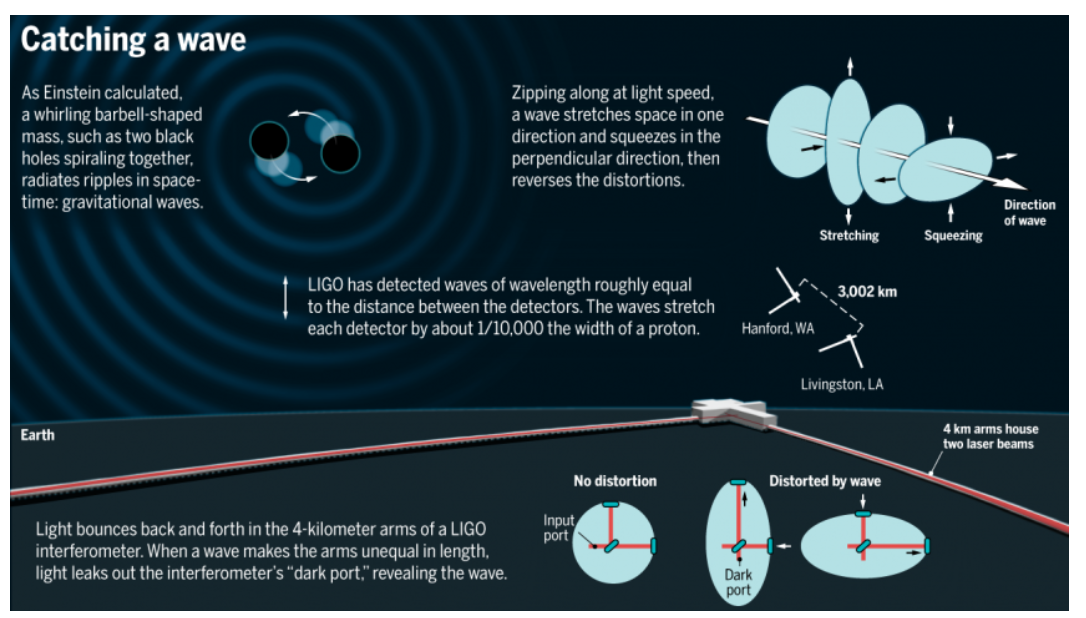 “These are ripples in the fabric of space-time that are produced, when black holes collide and stars explode”, gravitational waves are produced when objects accelerate.

Gravitational waves were first proposed, 100 years ago by Albert Einstein, as part of the Theory of Relativity.

The discovery can pave the way for proving the general theory of relativity, so that we can look deeper and deeper into the universe. It also throws up the possibility of detectors that can look at the beginning of the universe.

How this Gravitational Waves have been Identified?

On February 11th, 2016, scientists at the Laser Interferometer Gravitational-wave Observatory (LIGO) made history when they announced the first detection of gravitational waves.

The 2017 Nobel Physics Prize was awarded “for decisive contributions to the LIGO detector and the observation of gravitational waves”.

The waves detected by the laureates came from the collision of two black holes some 1.3 billion light years away. A light year is about 9.5 trillion km.

LIGO’s feat was among the most electrifying announcements in recent years.

As per the Theory of General Relativity, the pair of black holes orbiting around each other lost energy, through the emission of gravitational waves.

Black Holes are region of space-time. It exhibits strong gravitational effects, due to which, particles and electromagnetic radiation cannot escape from it.

It acts like an ideal black body reflecting no light. It continues to grow, by absorbing mass from its surroundings.

Why do gravitational waves matter to us?

The discovery is due to an extremely delicate experiment. Gravitational waves were predicted by Einstein almost 100 years ago. After about 50 years of experimentation the waves were detected for the first time in September 2015.

The discovery and the repeated detection (four times now) has made the possibility of gravitational wave astronomy very real.

Gravitational wave astronomy is a way of mapping out some of the most violent processes in the universe such as black hole or neutron star mergers that cannot be detected with light or the conventional methods.

Newton’s law of universal gravitation, part of classical mechanics, does not provide for their existence, since that law is predicated on the assumption that physical interactions propagate instantaneously (at infinite speed).

Gravitational waves can penetrate regions of space that electromagnetic waves cannot. They are able to allow the observation of the merger of black holes and possibly other exotic objects in the distant Universe.

In 2017, some group of scientists questioned the validity:

They argued that the two detectors belonging to LIGO were correlated and this led to a correlation in the noise factor. Weeding out noise from the signal is crucial in any such experiment.

This had not been done properly in the LIGO Scientific Collaboration (LSC). Since then, a version of their pre-print has been published in the Journal of Cosmology and Astroparticle Physics.

After a long silence, the LSC has put up a clarification on its Website.

Benefits for India by the LIGO-India project:

The project will bring unprecedented opportunities for scientists and engineers to dig deeper into the realm of gravitational wave and take global leadership in this new astronomical frontier.

The LIGO-India project will also bring considerable opportunities in cutting-edge technology for the Indian industry which will be engaged in the construction of the eight-km long beam tube at ultra-high vacuum on a levelled terrain.

With its establishment, India will join the global network of gravitational wave detectors.

Establishing an observatory in India also assumes importance because the further the distance between the observatories, the greater will be the accuracy in locating gravity waves.

Adding a new detector to the existing network will increase the expected event rates, and will boost the detection confidence of new sources and ability of localizing GW sources in the sky will be enhanced. It will also have an aspirational value for young Indian Scientists.

LIGO can act as platform to unravel the mysteries of universe and India’s association with it is going to help us in the future.

Things predicted by General theory of relativity by Einstein include:

As light gets closer to the sun, it bends towards the sun twice as much as classical physics (the system used before general relativity) predicts.

Redshift from gravity: When light moves away from an object with gravity (moving away from the centre of the valley), it is stretched into longer wavelengths. This was confirmed by the Pound-Rebka experiment.

The Shapiro delay: Light appears to slow down when it passes close to a massive object. This was first seen in the 1960s by space probes headed towards the planet Venus.

Gravitational waves: They were first observed on 14 September 2015.

This is how science makes progress in leaps and bounds, with thoughtful critiques and interventions in between.

In this case, the attendant controversy captured the interest of even those beyond the World of Science. Now, the LSC plans to come out with a paper that carries detailed explanations.

Einstein had posited that large gravitational forces could stretch light, much like the compression and stretching of sound waves we perceive with the change of pitch of a passing train.

India is also working to have its own detector under the consortium known as INDIGO.

However, the successful completion and discovery of Gravitational waves from Indian consortium needs cooperation from all across the world as it cannot be done by a single nation due to technical issues.

There is need to build on this to provide more such opportunities to the scientist community of India.