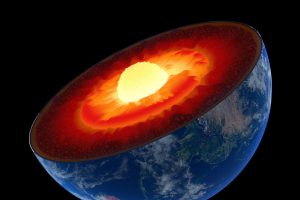 For Prelims and Mains: All about Earth’s inner core, its state and significance of its finding.

Context: Contrary to the fact the Earth’s inner core is solid, researchers from Australian National University (ANU) have found that it is comparatively softer.

Facts about the inner core of the Earth:

What is inner core made of?

Why is the radius of inner core unknown?

Purpose of the Earth’s inner core:

When charged particles from the solar wind collide with air molecules above Earth’s magnetic poles, it causes the air molecules to glow, causing the auroras – the northern and southern lights.

How has it been discovered?

Researchers came up with a way to detect shear waves, or “J waves” in the inner core – a type of wave which can only travel through solid objects.

According to the research published by the university, the wavefield method looks at the similarities between the signals at two receivers after a major earthquake, rather than the direct wave arrivals. The study shows these results can then be used to demonstrate the existence of J waves and infer the shear wave speed in the inner core.

It has been found that the inner core shares some similar elastic properties with gold and platinum.

What is the significance of this method?

Context: Describing as “unacceptable” the existence of 5,133 vacancies of judges in “Higher Judicial Service” and “Lower Judicial Service”, the Supreme Court has sought the response of the State governments and the High Courts whether the time for the ongoing recruitment of 4,180 judicial officers could be shortened.

A seven-month schedule for recruitment has been formulated by the top court in the Malik Mazhar Sultan case. If the time taken exceeds the schedule fixed by this Court, the reasons thereof should be furnished by the Registries of such High Courts/concerned authorities of the State where the recruitment is done through the Public Service Commission(s) which are in default.

Central recruitment to fill judges’ vacancies is the right idea:

The Union law ministry is working with the Supreme Court to conduct a nationwide examination to recruit around 6,000 judges for the lower judiciary as a one-time measure.

Under the nationwide recruitment scheme, a central agency will conduct the test with due importance given to local languages for those opting for a particular state. Subsequently, an all-India merit list will be prepared based on which the state governments will make the final appointments. Although this has been proposed as a one-time measure, there is a case here to have a permanent central judicial recruitment mechanism. This will also help ensure uniformity in judicial recruitment across the country.

This is much needed given the huge number of vacancies for judges and the high pendency of cases. In fact, lower courts currently have a backlog of 2.78 crore cases. Unless judges are quickly recruited, this number can’t be kept down. True, appointment of judges in district and subordinate courts is the responsibility of state governments and the high courts concerned. But things have come to this pass because of inordinate delays in holding examinations for judicial recruitment at the state level. Context: India and Myanmar have signed an important MoU for the appointment of a private Port Operator for the Operation and Maintenance of Sittwe Port, Paletwa Inland Water Terminal and associated facilities included in the Kaladan Multi Model Transit Transport Project in implementation of India’s Act East Policy.

Following this MoU the process of identifying bidders to maintain these facilities will be initiated by floating an RFP. Subsequent to the commencement of operations at this port, it would offer new infrastructure for trade including between India and Myanmar, thereby contributing to job creation and development in the whole region, particularly in the Rakhine and Chin States of Myanmar. For Prelims and Mains: Key features and significance of INF Treaty.

Context: U.S. President Donald Trump has announced that he would “terminate” the INF Treaty in response to a long-running dispute over Russian noncompliance with the treaty.

The United States first alleged in its July 2014 Compliance Report that Russia is in violation of its INF Treaty obligations “not to possess, produce, or flight-test” a ground-launched cruise missile having a range of 500 to 5,500 kilometers or “to possess or produce launchers of such missiles.” Subsequent State Department assessments in 2015, 2016, and 2017 repeated these allegations. Russia denies that it is in violation of the agreement. On December 8, 2017, the Trump administration released a strategy to counter alleged Russian violations of the Treaty.

The 1987 Intermediate-Range Nuclear Forces (INF) Treaty required the United States and the Soviet Union to eliminate and permanently forswear all of their nuclear and conventional ground-launched ballistic and cruise missiles with ranges of 500 to 5,500 kilometers.

What are the military implications of withdrawal?

It is unclear what INF-prohibited systems the United States could deploy to Europe or Asia in the near term. The U.S. military has not developed any land-based missiles within the prohibited ranges for decades and has only just started funding a new ground-launched cruise missile to match the 9M729.

What are the diplomatic implications of withdrawal?

Withdrawal is likely to be controversial with U.S. allies in NATO, further splitting the alliance at a difficult time for transatlantic relations. Many Western European NATO states favor retaining the INF, in conjunction with previous U.S. policy designed to push Moscow back into compliance. This raises concerns that divisions within NATO may worsen when the United States officially withdraws from the INF.

Withdrawal will probably not lead to a new INF deal. Given its heavy investment in intermediate-range systems, China will not take up Trump’s offer of talks with the United States and Russia. Moscow seems to be in no mood for negotiations.

Trump’s move is also likely to undermine the 2010 New START treaty governing U.S. and Russian long-range nuclear systems. The INF Treaty’s demise will undercut New START by reopening questions on the relationship between intermediate and strategic systems that have been resolved for 30 years by the elimination of ground-based, intermediate-range missiles.

For Prelims and Mains: Tea Board- functions, objectives and programmes.

Context: Tea Board of India is planning to launch an app aimed at guiding small growers, whose share in total tea production is increasing. The proposed name of the app is Chai Sahay (tea help).

About Tea Board of India:

Context: The Insolvency Law Committee (ILC) on October 22, 2018 submitted its 2nd Report on Cross Border Insolvency to Arun Jaitley, Minister of Finance and Corporate Affairs. The ILC was constituted by the Ministry of Corporate Affairs to recommend amendments to Insolvency and Bankruptcy Code of India, 2016.

As the size of the Indian economy grows, business and trade have adopted an increasingly international character. Creditors and corporates frequently transact business in more than one jurisdiction. Foreign banks and creditors finance Indian companies and Indian banks have foreign exposure. Also, as part of its Ease of Doing Business and Make in India policies, India seeks to attract foreign companies to set up manufacturing facilities in India.

Besides, global experience demonstrates that cross-border investment decisions and their outcomes, are considerably affected by the insolvency laws in force in a country. Towards this end, even though the Insolvency and Bankruptcy Code, 2016 has resulted in significant improvement in India’s insolvency regime, there is a need to include cross-border insolvency in the Code to provide a comprehensive insolvency framework.

Inclusion of cross-border insolvency framework will further enhance ease of doing business, provide a mechanism of cooperation between India and other countries in the area of insolvency resolution, and protect creditors in the global scenario.

Also, it will make India an attractive investment destination for foreign creditors given the increased predictability and certainty of the insolvency framework.

The UNCITRAL Model Law has till now been adopted in 44 countries and forms part of international best practices in dealing with cross border insolvency issues. The model law gives precedence to domestic proceedings and protection of public interest.

The advantages of the model law include greater confidence generation among foreign investors, adequate flexibility for seamless integration with the domestic Insolvency Law and a robust mechanism for international cooperation.

On the global scale, the UNCITRAL (United Nations Commission on International Trade Law) Model Law on Cross-Border Insolvency, 1997 (Model Law) has emerged as the most widely accepted legal framework to deal with cross-border insolvency issues while ensuring the least intrusion into the country’s domestic insolvency law. Due to the growing prevalence of multinational insolvencies, the Model Law has been adopted by 44 States till date, including Singapore, UK and US.

Context: Union Ministry of Environment, Forests and Climate Change (MoEFCC) has launched Harit Diwali-Swasth Diwali campaign. MOEFCC has merged this year’s campaign with “Green Good Deed” movement that has been initiated as social mobilization for conservation and protection of environment.

Aim: To reduce adverse environmental conditions especially pollution in the country after post Diwali celebrations due to excessive bursting of crackers which contributes significantly to air and noise pollution.

Air pollution is a serious health issue in the country especially in the northern parts during winter seasons. It is attributed to dust, burning of crops in certain states, burning of garbage construction and prevailing climatic conditions.

Context: Andhra Pradesh government has proposed to set up a ‘Gaming Garage’ to generate employment and encourage entrepreneurs and game developers in view of its growing importance. The ‘Gaming Garage’ will be launched in Vijayawada very soon.

Background: The gaming became an industry with crores of rupees turnover with the rapid development of computers and smartphone technologies. The Cabinet in April gave its nod to animations and visual effects, gaming and comics policy to attract the best from the sector and an investment of about ₹6,400 crore by 2020. Where is Migingo Island Located?

Compared to half the size of a football pitch, Migingo is a small rock Island, located in Lake Victoria which is the largest lake in Africa and the largest Tropical Lake in the whole world.

For over a decade, Migingo has been a source of tension between Uganda and Kenya, who have been unable to decide to whom it really belongs. 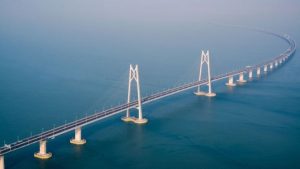