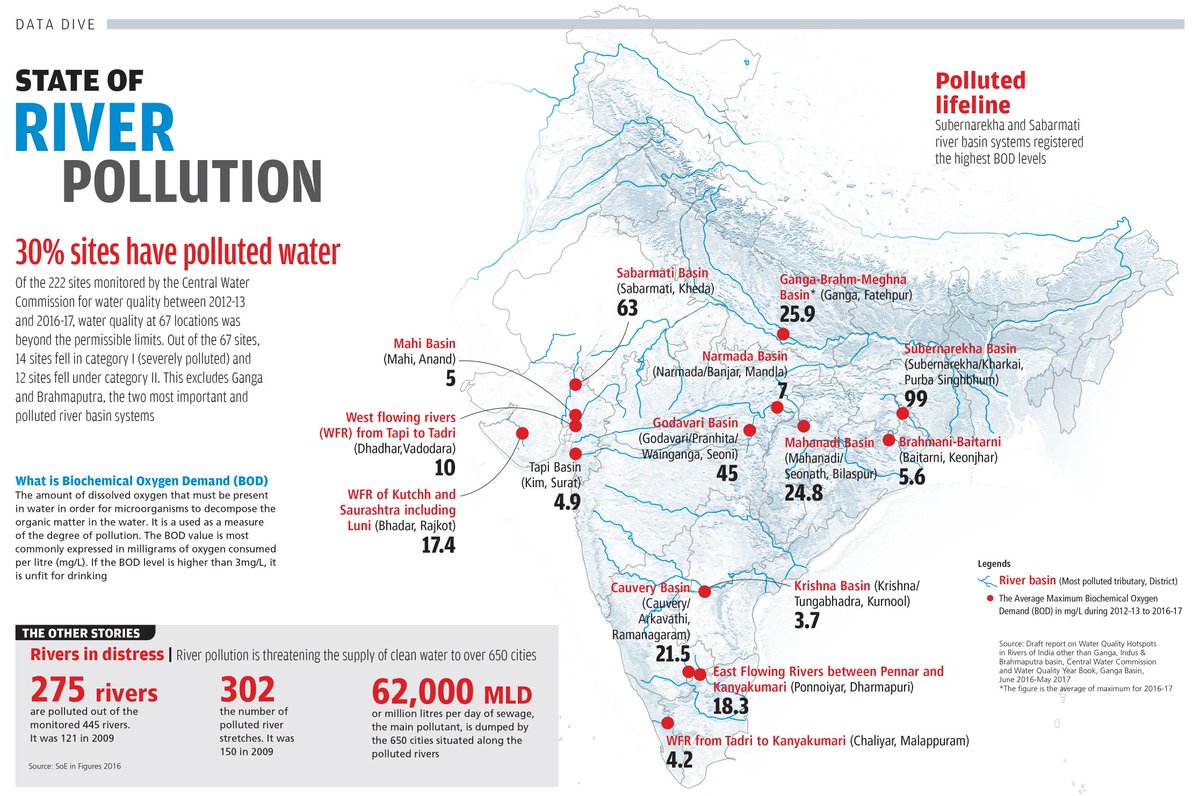 Based on the recommendations of the National Green Tribunal, the CPCB last month apprised the States of the extent of pollution in their rivers.

The number of polluted stretches in India’s rivers has increased to 351 from 302 two years ago.

The number of critically polluted stretches where water quality indicators are the poorest has gone up to 45 from 34, according to an assessment by the Central Pollution Control Board (CPCB).

The Rs. 20,000 crore clean-up of the Ganga may be the most visible of the government’s efforts to tackle pollution, the CPCB says several of the river’s stretches in Bihar and Uttar Pradesh are actually far less polluted than many rivers in Maharashtra, Assam and Gujarat.

These three States account for 117 of the 351 polluted river stretches.

The most significant stretches of pollution highlighted by the CPCB assessment include:

BOD is the amount of dissolved oxygen needed (i.e. demanded) by aerobic biological organisms to break down organic material.

BOD is a proxy for organic pollution. If BOD is higher, the worse is the river. The health of a river and the efficacy of water treatment measures by the States and municipal bodies are classified depending on BOD.

Reasons behind the river being more polluted:

The cultural significance of the Ganga is such that there’s been greater focus on it but many more rivers are far more polluted.

A 2013 World Bank study estimated that environmental degradation is costing India at least $80 billion a year, of which losses to rivers form a significant part. This is indeed a problem of catastrophic dimensions.

Government should be to ensure that there was a limit to the amount of water that can be drawn from the river.

The immediate plan should be to expand the supply of treatment plants.

Civil societies pressure on the Government is the vital aspect.

All liquid effluent discharge from the textile units and tanneries should be brought down to zero and it is to be pursued rigorously. Assistance to be given to industries to choose the best technologies for recovery of waste waters for reuse.

By adopting a zero-waste lifestyle that consists of “Rethink, Reduce, Reuse, Recycle, Compost and Close the Loop (4R2C)”, we can limit our trash output and save tonnes of solid waste from ending up in landfills and rivers.

The adoption of a river can also be done as a part of corporate sustainability responsibility programmes organised together with the local communities with the support of local government agencies.

These measures are urgently needed to revive India’s many dying rivers, protect its agriculture, and prevent serious harm to public health from contaminated water.