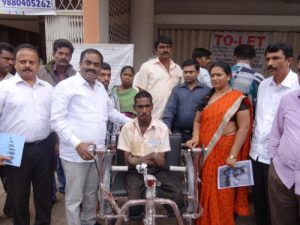 Context: The Department of Empowerment of Persons with Disabilities (Divyangjan), Ministry of Social Justice & Empowerment is organising a ‘National Conference of District Disability Rehabilitation Centres’.

District Disability Rehabilitation Centre (DDRC) provide comprehensive services to persons with disabilities and facilitate creation of infrastructure and capacity building at the district level for awareness generation, rehabilitation and training of rehabilitation professionals.

The District Disability Rehabilitation Centres are set up under the Plan Scheme- “Scheme for implementation of Persons with Disabilities (Equal Opportunities, protection of Rights and Full Participation) Act 1995 (SIPDA).” 310 districts have been identified and 263 DDRCs have been set up.

Objectives of the District Disability Rehabilitation Centres are as under: 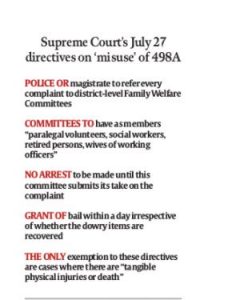 Context: Taking note of the ‘misuse’ of Section 498A, the Supreme Court has said that the accused can now seek anticipatory bail.

A batch of pleas were filed in the Supreme Court seeking revisiting of a judgement that had reduced the severity of the anti-dowry law on the offence of subjecting a married woman to cruelty by spouse and in-laws.

A two-judge bench of the apex court in July last year had voiced concern over “abuse” of section 498 A (subjecting a married woman to cruelty) and passed a slew of directions, including that no arrest should “normally be effected” without verifying allegations as violation of human rights of innocents could not be brushed aside.

Section 498A of the Indian Penal Code deals with husband or relatives of husbands subjecting a woman to cruelty. Punishment under the Section is a maximum of three years and was so far a non-bailable offence.

What necessitated the court’s intervention?

The anti-dowry law was enacted with the laudable object of punishing cruelty at the hands of husband or his relatives – particularly when such cruelty drives the wife to suicide. However, complaints are mounting up over the years alleging misuse of the anti-dowry harassment law – framed in 1983 following a spate of dowry-related deaths – by disgruntled wives. The law is also being misused.

A growing trend is being observed among women involved in marital discord to abuse Section 498A of IPC to rope in their husbands’ relatives — including parents, minor children, siblings and grandparents — in criminal cases. Therefore, it is high time such frivolous cases which violate the human rights of innocent is checked.

This is a shift from the dominant judicial conception of women as victims who would silently suffer injustice rather than bring disrepute to their family by taking domestic conflict outside the four walls of the home. Going by the popular portrait, it is only the worst victim of abuse among women who approach the court for redress. With its latest observations, the court broke away from the reigning perception to rule that in dowry cases, the account of the alleged victim need not be taken at face value.

Though Section 498A of the IPC was enacted to protect women from cruelty in matrimonial homes, its misuse to harass the other side too is causing social unrest. There should be gender justice for women as dowry has a chilling effect on marriage on the one hand. On the other hand, there is right to life and personal liberty of the man.

Context: The 2018 edition of the ‘Exporting Corruption Report’ has been released by anti-corruption organisation Transparency International. The classification of enforcement is based on the convention countries’ enforcement actions in the period 2014-2017.

India is among four countries with “no or little enforcement” mechanism to check foreign bribery. The report asks India to criminalise foreign bribery and introduce effective legislation to protect whistleblowers in the private sector.

The report notes that:

As foreign bribery is not yet criminalised in India, the adequacy of the enforcement system in relation to this specific offence cannot be assessed. However, certain shortcomings in the enforcement system, in particular those evident from current enforcement of domestic corruption, are also a concern for foreign bribery enforcement. In particular, while the Indian Penal Code and Prevention of Corruption Act prescribe criminal and civil liability for domestic corruption, the reality is that actions taken against the perpetrators have been few.

Concerns expressed by the report:

If China, Hong Kong, India and Singapore do not enforce hard-won international standards for conducting business, competitors from countries that do enforce will find themselves disadvantaged. This may lead to a reduction in enforcement, destabilising the global marketplace. The real losers will be the global economy and people in countries affected by exported corruption, especially grand corruption.

The OECD Anti-Bribery Convention was adopted in 1997 to address the supply side of international corruption.

Context: The United States has asserted that it will continue to advocate for New Delhi’s membership to the Nuclear Suppliers Group as it meets all the criteria. US has granted India the Strategic Trade Authorisation (STA-1) status. The status places India in the inner circle of America’s closest allies.

India has been seeking entry into the 48-member elite nuclear club, which controls nuclear trade, but China has repeatedly stonewalled its bid.

While India, which is backed by the US and a number of western countries has garnered the support of a majority of the group’s members, China has stuck to its stand that new members should sign the Nuclear Non-Proliferation Treaty (NPT), making India’s entry difficult as the group is guided by the consensus principle. India is not a signatory to the NPT.

Nuclear Suppliers Group (NSG) is a multinational body concerned with reducing nuclear proliferation by controlling the export and re-transfer of materials that may be applicable to nuclear weapon development and by improving safeguards and protection on existing materials. Interestingly, the NSG was set up in 1974 as a reaction to India’s nuclear tests to stop what it called the misuse of nuclear material meant for peaceful purposes.

Why India should be granted NSG membership?

In this game of developing nuclear weapons India has not indulged in any dubious/clandestine activity and its programme has been developed solely by years of hard work indigenously. By this single act India has shown that developing a credible nuclear weapons programme through honest and civilian means is possible for any country having high-level scientific manpower and materials.

Besides, by declaring a voluntary moratorium on further underground nuclear tests India has effectively acted in sense and spirit of NPT/CTBT provisions. By steering its programme only as a minimum deterrence and pledging NFU unless faced with an attack of weapons of mass destruction (WMD), India has established itself as a responsible nuclear state.

Benefits associated with NSG membership- Once admitted, an NSG member state gets:

Context: The government has handed over a Rs 440 crore cheque to the NDDB from the Dairy Processing and Infrastructure Development Fund (DIDF), marking the formal launch of the fund set up to provide soft loans to modernise and raise capacity of dairy cooperatives.

NABARD has set up the DIDF with a corpus of Rs 8,004 crore to bring more dairy farmers into organised milk marketing through cooperatives. The fund is implemented through National Dairy Development Board (NDDB) and National Cooperative Development Corporation(NCDC).

The major activities of DIDF:

The project will focus on building an efficient milk procurement system by setting up of chilling infrastructure & installation of electronic milk adulteration testing equipment, creation/modernization/expansion of processing infrastructure and manufacturing faculties for Value Added Products for the Milk Unions/ Milk Producer Companies.

The dairy processing infrastructure of cooperatives needs modernisation and capacity enhancement, and with most cooperatives sharing their profits with milk producers, they need support.

For Prelims and Mains: All about the Orion Spacecraft and the Mission.

Context: NASA has successfully completed the final test to qualify Orion’s space capsule’s parachute system for flights with astronauts, ahead of its mission to send humans to the Moon and beyond.

Context: Union Ministry of Water Resources has instituted National Water Awards. The awards will be given for 13 categories.