India’s first lunar probe Chandrayaan 1, launched by Indian Space Research Organisation in October 2008, among its many achievements, discovered the presence of water molecules in the lunar soil. The Chandrayaan 2 mission to be launched in January 2019 is going for deeper exploration in the same region – the south pole of the moon. This mission will use and test various new technologies and conduct new experiments.

95 % of its planned objectives were achieved. 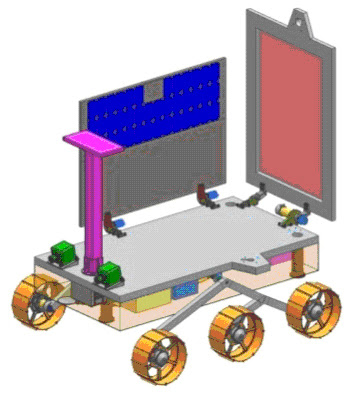 An artist impression of the rover of Chandrayaan 2

Indian Space Research Organisation (ISRO) has successfully sent a lunar orbiter and a Mars orbiter. It also launched numerous communication satellites and earth observation satellites. Satellite navigation systems like GAGAN and IRNSS have been deployed. It has future plans like development of a reusable launch vehicle, human spaceflight (Gaganyaan by 2022), controlled soft lunar landing (Chandrayaan 2), interplanetary probes and a solar spacecraft mission (Aditya). The missions of ISRO have helped in various applications like telecommunication, military, etc. and its future missions are expected to further explore new areas in space technology.