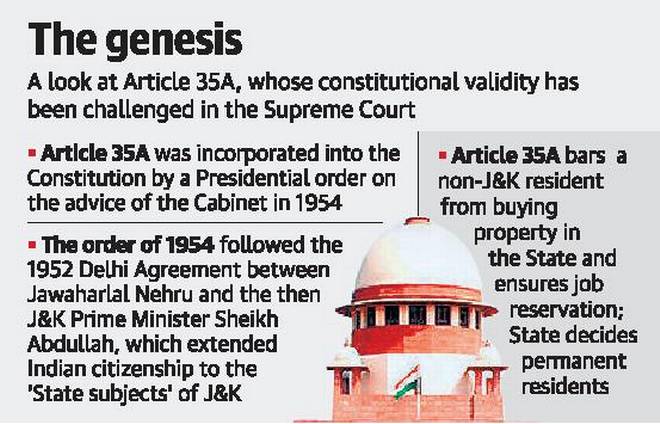 Context: Article 35A of the Constitution is now being vigorously contested with its constitutional validity being challenged before the Supreme Court. It has managed to create widespread legal and political controversy, despite it not even finding a mention in the regular sequential text of the Constitution.

What is Article 35A?

Article 35A is a provision incorporated in the Constitution giving the Jammu and Kashmir Legislature a carte blanche to decide who all are ‘permanent residents’ of the State and confer on them special rights and privileges in public sector jobs, acquisition of property in the State, scholarships and other public aid and welfare.

The provision mandates that no act of the legislature coming under it can be challenged for violating the Constitution or any other law of the land.

Article 35A was incorporated into the Constitution in 1954 by an order of the then President Rajendra Prasad on the advice of the Jawaharlal Nehru Cabinet.

The ‘classification’ created by Article 35A has to be tested on the principle of equality as it treats non-permanent residents of J&K as ‘second-class’ citizens. Such persons are not eligible for employment under the State government and are also debarred from contesting elections. Meritorious students are denied scholarships and they cannot even seek redress in any court of law.

The major sufferers are women who marry outside J&K. Though they retain their Permanent Resident Certificate, their children cannot be permanent residents. This restricts their basic right of inheritance. Further, the issues of refugees who migrated to J&K during Partition are still not treated as ‘State subjects’ under the J&K Constitution.

This matter requires the active participation of all stakeholders. It is necessary to give confidence to the residents of J&K that any alteration in status quo will not take away their rights but will boost J&K’s prosperity as it will open doors for more investment, resulting in new opportunities. Article 35A, which was incorporated about six decades ago, now requires a relook, especially given that J&K is now a well-established democratic State.

Topic: Issues related to health and Welfare schemes for vulnerable sections of the population by the Centre. 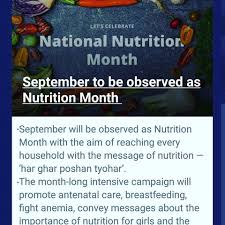 Context: The Ministry of Women and Child Development, Government of India had recently organized an orientation workshop for various stakeholders participating in the Poshan Maah (National Nutrition Month) being celebrated in the month of September.

The Workshop focused on sensitizing the line Ministries, States/UTs and District level functionaries and partners on various aspects of Rashtriya Poshan Maah (National Nutrition Month) being celebrated during the month of September across the Country as part of Jan Andolan under POSHAN Abhiyaan.

Objectives: The programme through use of technology, a targeted approach and convergence strives to reduce the level of Stunting, Under-nutrition, Anemia and Low Birth Weight in Children, as also, focus on Adolescent Girls, Pregnant Women & Lactating Mothers, thus holistically addressing malnutrition.

Aims: POSHAN Abhiyaan aims to ensure service delivery and interventions by use of technology, behavioural change through convergence and lays-down specific targets to be achieved across different monitoring parameters over the next few years.

Coverage: To ensure a holistic approach, all 36 States/UTs and 718 districts will be covered in a phased manner by the year 2020.

For Prelims and Mains: Features and significance of the portal.

Context: A National Logistics Portal is being developed by the Ministry of Commerce and Industry to ensure ease of trading in the international and domestic markets. The portal will link all the stakeholders of EXIM, domestic trade and movement and all trade activities on a single platform.

The portal will be implemented in phases and will fulfil the commitment of the Government of India to enhance trade competitiveness, create jobs, boost India’s performance in global rankings and pave the way for India to become a logistics hub.

In 2018-19 budget speech, Union Finance Minister had announced that Department of Commerce will create portal which will be single window online market place for trade and will connect business, create opportunities and bring together various ministries, departments and private sector. 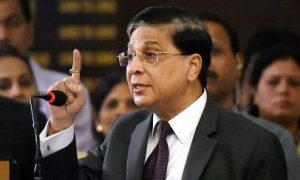 For Prelims and Mains: Key features of newly launched applications.

Context: Three new applications have been launched for the benefit of the litigants and lawyers.

These applications are: e-Filing, e-Pay, and National Service and Tracking of Electronic Processes (NSTEP).

The e-Filing application will facilitate efficient administration of Judicial System by easing pressure on filing counters and will speed up work flow processing. Data entry will be more accurate which will help to take data driven decisions in court administration.

It will start building digital repositories which will auto generate paper books and can be quickly transmitted to Higher Courts which will reduce delays. It will also help reduce touch point of litigants will also result in more productivity of staff members and will help send documents for service to other locations or mail addresses which will be relatively easy.

It is a unified portal wherein facility to pay online court fees is provided. The platform is user friendly which can be used with very little self help. At present, the facility will be made operational in two states – Maharashtra and Haryana.

The OTP authentication provides secure way to financial transactions and one can get instant acknowledgement through SMS and print receipt. The application is beneficial for the judicial administration since verification of court fees becomes more easy, secure and transparent and accurate figures of court fees collected can be generated for any court, district or State.

It is launched as part of the eCourts Project. It is a transparent and secure system for transmission of process from one location to another and will address delays in process. It offers facility to send electronic processes directly to registered mail of the addressee by secured mechanism; enables uploading of documents associated with process; and facilities like tracking GPS, obtaining photograph and on screen signature.

NSTEP will lead to secured auto generation of processes with unique QR Code through CIS, publishing processes on portal and transmission of processes to other court complexes. The service will empower litigants with real time information relating to status of service of process and will entail litigants to take immediate follow up action which will reduce delays.

About the e- courts project:

What is it? The eCourts Mission Mode Project (Phase I 2010-15; Phase II 2015-19) is a national eGovernance project for ICT enablement of district and subordinate courts of the country.

Implementation: It is being implemented by the Government of India with a total outlay of 1670 crores (Phase II).

The major objectives of the Project are to make whole judicial system ICT enabled by putting in place adequate and modern hardware and connectivity; automation of workflow management in all courts; electronic movement of records from taluka/trial to appeal courts; installation of video conferencing (VC) facility and recording of witness through Video Conferencing.

Specific targets set under the Project include: computerization of all the courts (around 20400) and DLSA and TLSC; WAN and cloud connectivity in 3500 court complexes; full Installation and use of Video Conferencing facility at 3000 Court Complexes and 1150 prisons; charting out key identified citizen services like electronic filing, daily orders, delivery of decrees, online case status in all the district courts etc.

Context: NITI Aayog has launched 5 Thematic Reports on Sustainable Development in Indian Himalayan Region. The reports from the five working groups discuss the significance, the challenges, the ongoing actions and a future roadmap.

Recognizing the uniqueness of the Himalayas and the challenges for sustainable development, NITI Aayog had set up 5 Working Groups (WGs) in June 2017 to prepare a roadmap for actions in 5 thematic areas.

The call for actions include: 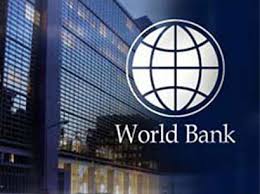 Context: World Bank has launched world-first blockchain bond. Australia’s Commonwealth Bank (CommBank) is the sole arranger of the issuance by the World Bank.

The prototype deal, dubbed a “Bondi” bond – standing for Blockchain Operated New Debt Instrument as well as a reference to Australia’s most famous beach – is being viewed as an initial step in moving bond sales away from manual processes towards faster and cheaper automation.

This issue of World Bank bond will be the first time that capital is raised from public investors through a legally valid bond issuance that uses blockchain from start to finish.

The World Bank, whose bonds carry an AAA rating, regularly uses its borrowing power to help develop new bond markets as well as pioneering new means for selling and trading the securities. It issues between $50 billion and $60 billion a year of bonds to back economic progress in developing countries.

Australia is a popular test site for market developments because of its well-established financial infrastructure and the familiarity of international investors with the Australian dollar, which is one of the most-traded currencies in the world.

Blockchains are a new data structure that is secure, cryptography-based, and distributed across a network. The technology supports cryptocurrencies such as Bitcoin, and the transfer of any data or digital asset. Spearheaded by Bitcoin, blockchains achieve consensus among distributed nodes, allowing the transfer of digital goods without the need for centralized authorisation of transactions. The present blockchain ecosystem is like the early Internet, a permissionless innovation environment in which email, the World Wide Web, Napster, Skype, and Uber were built.

The technology allows transactions to be simultaneously anonymous and secure, peer-to-peer, instant and frictionless. It does this by distributing trust from powerful intermediaries to a large global network, which through mass collaboration, clever code and cryptography, enables a tamper-proof public ledger of every transaction that’s ever happened on the network.

A block is the “current” part of a blockchain which records some or all of the recent transactions, and once completed, goes into the blockchain as permanent database. Each time a block gets completed, a new block is generated. Blocks are linked to each other (like a chain) in proper linear, chronological order with every block containing a hash of the previous block. 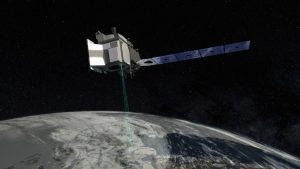 For Prelims and Mains: Features, objectives and significance of ICESat- 2.

Context: NASA will shortly launch the Ice, Cloud and Land Elevation Satellite-2 (ICESat-2) mission to measure — in unprecedented detail — changes in the heights of Earth’s polar ice to understand what is causing ice sheets to melt fast.

ATLAS will fire 10,000 times each second, sending hundreds of trillions of photons to the ground in six beams of green light. With so many photons returning from multiple beams, ICESat-2 will get a much more detailed view of the ice surface than its predecessor. As it circles Earth from pole to pole, ICESat-2 will measure ice heights along the same path in the polar regions four times a year, providing seasonal and annual monitoring of ice elevation changes. Beyond the poles, ICESat-2 will also measure the height of ocean and land surfaces, including forests.