Topic– Indian culture will cover the salient aspects of Art Forms, Literature and Architecture from ancient to modern times.

1) There are a lot of similarities, as well as significant differences between the  Hindustani and the Carnatic music? Discuss.(250 words)

The question wants us to write in detail about the similarities between Hindustani music and the Carnatic music as well as the key differences between them.

Topic–  Parliament and State Legislatures – structure, functioning, conduct of business, powers & privileges and issues arising out of these.

2) Critically analyze the idea of holding simultaneous elections to the Lok Sabha and the State Assemblies in India. (250 words)

Although the issue has been in news for a long time and has been sufficiently discussed in earlier questions, in the wake of increased voices in favour of simultaneous polls, and also that the law commission has recently submitted its report,  it is necessary to revisit the issue and deliberate upon it.

Critically analyze- Here we have to dig deep into the issue and identify and discuss about all the related and important aspects and correlate them to satisfy the key demand of the question. Based on our discussion we have to form our opinion on the  overall issue.

The question wants us to delve deep into the idea of holding simultaneous elections in India and bring out the positive aspects as well as negative aspects of it. We also have to discuss the legal and technical/ logistical feasibility of such an exercise. Based on our discussion we have to form a personal opinion on the issue.

Topic- India and its neighborhood- relations.

3) Given concerns over increasing Indian influence, our foreign policy must exercise caution in dealing with Bhutan. Critically examine.(250 words)

Bhutan is a small but an important neighbour of India. The two nations share close historical ties which have only strengthened with time. However, there are several issues involved in India-Bhutan relationship, which need to be discussed.

Examine- Here we have to probe deeper into the topic,  get into details, and find out the causes or implications if any. Based on our discussion we have to form our opinion on the issue.

The question wants us to discuss why there is a need to exercise caution in our foreign policy while dealing with Bhutan- what are the issues involved which demand so. We also have to discuss the implications of a unrestrained and uncalled for  intervention in Bhutan. Based on our discussion, we have to form a personal opinion on the issue.

Introduction- mention that the basic framework of India- Bhutan bilateral relations is the Treaty of Friendship and Cooperation signed in 1949 between the two countries, revised in February 2007.The India-Bhutan Friendship Treaty not only reflects the contemporary nature of our relationship but also lays the foundation for their future development in the 21st century.

Conclusion- Bring out the need for enhanced cooperation and a positive relationship built on mutual confidence and respect for sovereignty. Write a few lines as to how India should proceed in this regard

Relation with Bhutan needs caution because there are some issues that need to be dealt :-

What more needs to be done:-

4) Laws such as Bombay Prevention of Begging Act that criminalize people on account of their poverty or vulnerability needs to go. Examine with special emphasis on the rights of transgender persons.(250 words)

Delhi HC has recently decided that the aforementioned Act is unconstitutional. The article discusses the reasons for the same and examines the impact that the Act had on vulnerable sections with special emphasis on the transgender population. The article also discusses other such discriminatory laws which accord special powers often misutilized. Court judgements such as these are usually important from the point of view of mains, and thus needs to be prepared.

The question expects us to discuss the reasons for declaring the Act unconstitutional and how the Act was discriminatory for vulnerable sections. Furthermore, we are expected to bring out other such laws which discriminate against people based on poverty or other such vulnerability and why they need to go.

Conclusion – Summarize your answer and emphasize why such laws are anachronistic and need to be reviewed.

Concerns with the act :-

5) Discuss the significance of NABARD’S All India Rural financial inclusion survey and examine what it tells us about the dream of doubling farmer’s income by 2022?(250 words)

The question expects us to discuss why NAFIS survey is significant, the insights it offers us into the levels of farmers income in the country. In the second part of the question, we need to analyze the findings and discuss whether achieving the dream of doubling farmer’s income by 2022 is possible, and ways to achieve it.

Introduction – Explain what the survey is and what it does. Mention that it combines the strengths of the NSSO’s Situation Assessment Survey (SAS) and RBI’s All India Debt and Investment Survey.

Conclusion – Give your view on what can be drawn from the survey and the way forward for doubling farmer’s income by 2022.

What the survey tells about doubling if farmers income :-

Topic– Part of static series under the heading – “Basics of Atmosphere”

6) Explain the division of the atmosphere into layers based on temperature classification and how each layer is significant for us? (250 words)

The question expects us to explain how the regions of the atmosphere are divided on the basis of temperature , the explanation of each layer along with the reasons how they are significant for us.

Introduction – Explain that as per the temperature classification, atmosphere can be divided into troposphere, the stratosphere, the mesosphere and the thermosphere.

Body – Note that you should draw a diagram in this question which will help you save up on words as well as provide an opportunity to cram in more facts and details. Explain the above layers and how they are significant for us. For instance, flights fly in tropopause to evade turbulence, the significance of ionosphere for radio communication etc. 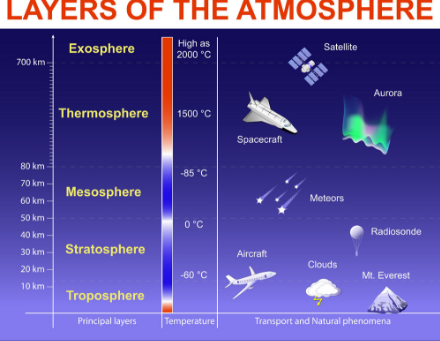 Topic – Determinants and consequences of Ethics in human actions

7) Evaluate whether the economic theory of consumerism is ill suited for the human race?(250 words)

Off late, we have seen that the world is suffering from a multitude of problems ranging from environmental degradation to racial tensions to social inequality. The article discusses the links between a materialistic outlook and these issues.

The question expects us to explain what consumerism is and highlight the implications of blindly adopting such an outlook. We need to discuss the views of important scholars who have highlighted the perils of excessive materialism and give our opinion on consumerism and its impacts.

Introduction – Explain what consumerism is and how it differs from capitalism.

Body – Discuss the social (lack of empathy, inequality), economic(positive impact of consumerism as it is the driver of business), political (colonization etc), cultural (how it has affected music, art), environmental and ethical impact of consumerism. Highlight the view of thinkers such as Gandhi who have held strong views against consumerism.

Conclusion – Give your opinion on the impacts of consumerism and the nature of change (if you think there should be) that is required in our mindset.

Consumerism is a socio-economic model, in which people buy and acquire goods and services, including luxury goods such as car, house, white goods, jewellery, etc.