1) The recent incidents of rampant physical and sexual abuse of minors and women in childcare institutions (CCIs) and shelter homes in Bihar and Uttar Pradesh reveal how the state as well as the civil society have failed in their role as protectors and watchdogs. Comment. (250 words)

The recent news about physical and sexual abuse of the children in CCIs has taken everybody by surprise and shock. These institutions meant to protect such children instead of providing care and protection have become the dens of criminal activity and exploitation. It is important to know why these institutions along with other similar provisions for child protection have failed to deliver the results.

The question wants us to express our knowledge and understanding as to why the state as well as the society has failed to play their role of protector and watchdogs of the children especially those which are living in various CCIs across the country. We have to substantiate our opinion with proper and valid arguments.

Introduction- write a few lines about the protection guaranteed to the children under the constitution and the law- e.g Article 21, Right to Education and National Commission for Protection of Child Rights (NCPCR), POCSO act etc. Mention the recent controversy regarding CCIs.

2) Analyze some of the significant changes in India’s polity witnessed in recent years, which characterise the nature of democracy in today’s  India.(250 words)

The question seeks to analyze India’s nature of democracy as it stands today. Thus it is an important question in itself as well as for the UPSC exam.

Here we  have to examine methodically the structure or nature of the topic by separating it into component parts, and present them as a whole in a summary.

The question wants us to delve deep into the nature of Indian democracy in the present and link it with some significant political changes witnessed in the past few years. Here we have to remain least biased and bring out the objective aspects of the changes and the nature.

Introduction– write a few lines about the foundation of Indian democracy and its evolution since independence.

3) Various committees have been formed to give recommendations on preservation of Western Ghats, but not a lot has happened on that front. Examine. (250 words)

Introduction – Discuss the ecological criticality of Western Ghats and the details of the 3 committees mentioned above.

Conclusion – in light of extreme climate events, discuss the need for greater protection being accorded to ecologically sensitive areas like Western Ghats and the way forward.

Why the governments failed to implement these committee recommendations:-

4) It is high time for both the RBI and the government to make a choice between legislative mandates of inflation rate targeting and a holistic approach for development management. Critically Comment.(250 words)

A strict Inflation targeting approach of the RBI, as mandated, has been criticized for various reasons with restricting development opportunities being the most important of them. The RBI has recently been increasing repo rate as well as reverse repo rates under inflationary expectations. It is necessary to revisit the issue and have a short discussion thereupon.

Critically Comment- here we have to express our knowledge and understanding of the issue and form an overall opinion thereupon. Here we have to look at both negative as well as positive aspects and then form our opinion on the issue.

The question wants us to discuss the positive as well as negative aspects of inflation targeting and how it affects development of the country. Based on our discussion we have to form a substantive conclusion on the issue.

Introduction– write a few lines about the mandate of RBI to restrict inflation to 4 +/- 2%. Also mention RBI’s recent monetary policy changes like hike in repo and reverse repo rates.

Conclusion– Based on your discussion form a conclusion as to what should be done in this regard. Your opinion should be supported by further arguments in case needed.

India formally backed the inflation strategy of the Reserve Bank of India (RBI) by notifying a retail inflation target of 4% as an anchor for monetary policy. The RBI has recently been increasing repo rate as well as reverse repo rates under inflationary expectations.

5) The recent  report by the National Bank for Agriculture and Rural Development (NABARD), reiterate the vulnerability of Indian agriculture households. Discuss.(250 words)

Agriculture is the livelihood of around 48% of Indian population. It is extremely essential to discuss about the vulnerabilities of Indian agriculture households and how they have progressed with time. Besides, launched in 2016-17, NAFIS is a national level survey that offers a comprehensive overview of the rural population in terms of their status of livelihoods and level of financial inclusion. It was conducted in more than 40,000 households from 245 districts in 29 states. Its findings are important.

The question wants us to write in detail about the findings of the recent report by NABARD which highlights the vulnerabilities of Indian agriculture households. We also have to discuss the findings of some other report which reiterates such findings.

Introduction– write a few lines about the importance of agriculture for the vast majority of Indian farming households, as a source of subsistence and livelihood. Mention agriculture’s contribution to national GDP.

Conclusion–  sum up your discussion in a few lines and form a fair and a balanced conclusion on the above issue.

Topic – Inclusive growth and issues arising from it.

6) Addressing undernutrition challenge should be taken up on mission mode by the government. Discuss. Also suggest ways to address this challenge. (250 words)

The article contains very important statistics on status of malnutrition in India and strategies to deal with it. This topic is quite important while discussing inclusive growth in India.

The question expects us to highlight the status quo of undernutrition among children, women and other vulnerable sections of the society. Through such data and other constitutional and social imperatives, we need to establish the need of tackling this problem on mission mode. In the final part of the answer, we need to discuss the steps that need to be taken to address this significant challenge facing the Indian state.

Discussion – In your discussion, you need to establish the need of tackling the problem of undernutrition on an urgent basis and give suggestions for tackling this issue.

Introduction – Explain that India has been taking several measures to improve the status of nutrition and how the definition of nutrition has changed over the years with focus on micronutrients.

Conclusion – Summarize your answer while emphasizing the need of tackling this challenge and how we can do it.

Why India needs to focus on mission mode :-

Ways to address this challenge:-

Topic –  Part of static series under the heading – “Weathering and erosion , landforms of agents of weathering”

The question expects us to explain the landforms created by erosion and deposition as a result of highland glaciation. In our explanation, we need to mention how such landforms are formed and the features of such landforms 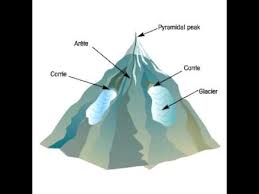