Insights into Editorial: The roadmap to military reform 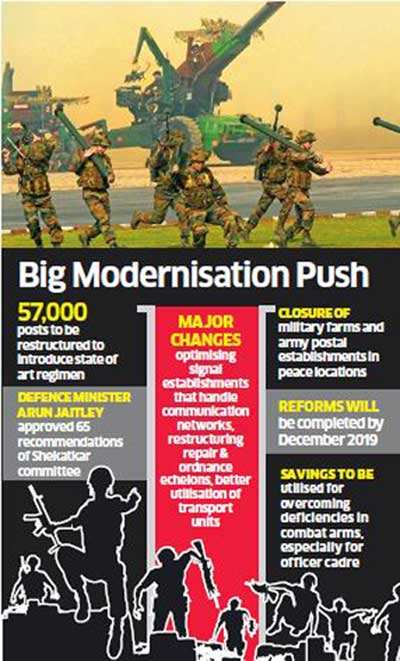 A recent historical overview would indicate just how confused things are, which doesn’t augur well for a ‘leading power’.

The initial flavour of the debate in the decades following the Group of Ministers’ report, the Kargil Review Committee report, and the Naresh Chandra Committee report focussed on a restructuring of higher defence organisation as the first step.

This was intended to improve synergy among different tools of statecraft (bureaucracy, military, research and development, intelligence, internal security mechanisms, and more).

When very little traction was seen in converting this into structural changes within the Ministry of Defence, and sharing of expertise, the debate shifted to the second tier of reform in the operational realm. This has unfortunately pitted the three services against one another in a series of turf wars that have ranged from control over space to control over cyber and special forces.

Need for a theatre command:

The creation of large Naval and Army aviation arms demonstrates the IAF’s understanding that there is a need to complement its dwindling resources with air arms that could act as tactical responders at best till the IAF brings its cutting-edge skills into the area to act as a decisive sword-arm.

India’s armed forces have little experience in training, staffing and exercising Joint Task Forces based on at least a division-sized land component.

Creation of three division-sized task forces for operations in varied terrain, including out-of-area contingency operations, could be mulled over. These would be commanded by an Army, Navy and Air Force three-star officer, respectively, reporting to the Chairman of the Chief of Staffs Committee. This could offer real lessons in integration.

A Committee of Experts (CoE) was constituted by Ministry of Defence under the chairmanship DB Shekatkar to recommend measures to enhance combat capability and rebalance defence expenditure of the armed forces.  The Report was taken up by the Ministry of Defence to frame key action points and roadmap for implementation.

The solution for reform:

Along with these turf wars has been an out-of-the-box proposition that a bottom-up approach may be the answer to India’s quest for integration.

Historical evidence of military reform (in Prussia, the U.S., the U.K., France and now China) shows that successful reform has always been driven by either a multipronged and simultaneous approach at all levels, or a sequential one beginning at the top. Any other approach that leaves the bottom and the top unattended is fraught with risk.

In the debate on reform in the Indian military, there is a need for clear policy-driven directives that meet India’s national security needs and challenges.

National security reforms and restructuring are bound to have far-reaching consequences and call for political sagacity, wisdom and vision.

Ideally speaking, a concurrent three-pronged approach to military reform would be ideal. Such an approach should respect the collective wisdom of past reports and take into account contemporary political and security considerations.