1) The dark ages in ancient India, spanning from the fall of Mauryan empire to the rise of the Gupta empire, was a period of significant socio-cultural transformation. Discuss.(250 words)

Discuss- Discuss- This is an all-encompassing directive which mandates us to write in detail about the key demand of the question. We also have to discuss about the related and important aspects of the question in order to bring out a complete picture of the issue in hand.

The question wants us to write in detail about how the dark ages as mentioned in the question was a period of significant socio-cultural transformation and not really a dark age.

Introduction- Write a few lines about the polity of the ancient dark ages of India i.e the period spanning from the fall of Mauryan empire to the rise of the Gupta empire. Mention the political instability for most of the times, small divided territories except the Kanishka empire etc.

Conclusion- Conclusion- sum up your discussion in a few lines and form a fair and a balanced conclusion on the above issue. E.g the period called as dark ages was actually a precursor of the classical age etc.

Topic–  India and its bilateral relations

2) Unless economic interconnection between India and Pakistan increases, there is very little possibility of an end to the feud between the two nations. Discuss.(250 words)

The article focuses on emphasizing on the economic potential of trade between India and pakistan, the immense economic significance it will be of for the two countries and the role that deepening economic relations between India and Pakistan will play in normalising bilateral relations. Several questions, over the past few years have been asked on India Pakistan bilateral relations and hence this question is important.

Introduction – Discuss the change of government in Pakistan and how it has led to a heightened focus over India Pakistan relationship.

Conclusion – Give a fair and balanced view on whether enhancing trade will help in normalising relations between the two countries, and discuss way forward.

Economic interconnection between India and Pakistan :-

3) Increasing fiscal deficit of states is a cause of worry and there is a considerable need to focus on state government finances. Analyze. (250 words)

The article discusses the increasing fiscal deficit of the states, the reasons for the same and the issues that might arise out of unchecked expenditure. Economic Survey last year had also discussed the need for keeping a tab on state government finances. This question expects you to prepare an important macroeconomic issue with wider ramifications.

The question expects us to analyze the situation of the states with respect to their fiscal deficit, the reasons for the worsening performance of the states over the years, the need to refocus on state government finances as highlighted in the article as well as by NK Singh committee. Finally, we need to suggest a way forward.

Conclusion – emphasize on the need to refocus on state finances and discuss the way forward.

How is this a cause of concern :-

4) Discuss the history of evolution of Artificial Intelligence and examine the challenges for further development of AI?(250 words)

AI is a disruptive innovation that has had a huge impact so much so that it is being compared to the advent of a new Industrial Revolution. India has also stated its commitment to incorporating AI in its developmental journey. The article discusses how AI came to its present state and the future challenges that AI will have to overcome to reach its full potential.

As the question demands, first, we need to discuss how AI came to its present form starting from rudimentary systems to systems that can imitate human action. Thereafter, our focus has to shift to explaining how AI would need to evolve in light of the challenges that it faces. The first part of the question is primarily theoretical where we need to discuss the evolution of AI, whereas, the second part expects us to discuss the way forward for AI.

Discuss – Here your discussion should focus on bringing out the various stages in evolution of AI, and the challenges therein which have to be overcome.

Introduction – Explain what AI and discuss AI is expected to usher in the era of post industrial revolution.

Conclusion – Emphasize on the role that AI is going to play in the years to come and discuss how the challenges discussed herein can be resolved.

History of evolution of artificial intelligence :-

Challenges for further development of AI:-

Topic – Part of static series under the heading – “Earthquakes”

5) Examine why earthquakes occur? Explain the various kind of waves produced in an Earthquake? (250 words)

The question is self explanatory in its demand and needs to be answered accordingly.

Introduction – Explain what earthquakes are.

Body – Discuss the various theories wrt formation of earthquake and thereafter explain the type of waves produced in earthquakes which are P, S, L, R.

Why do earthquakes occur:-

Waves of the Earthquake:- 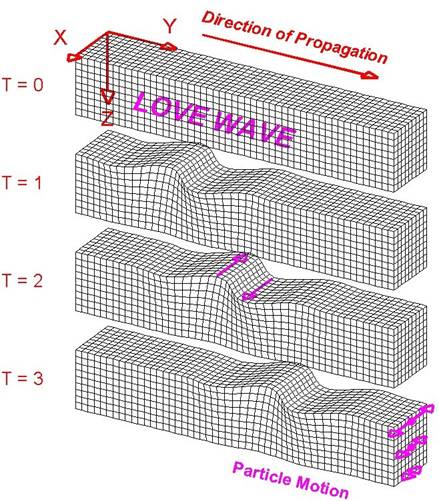 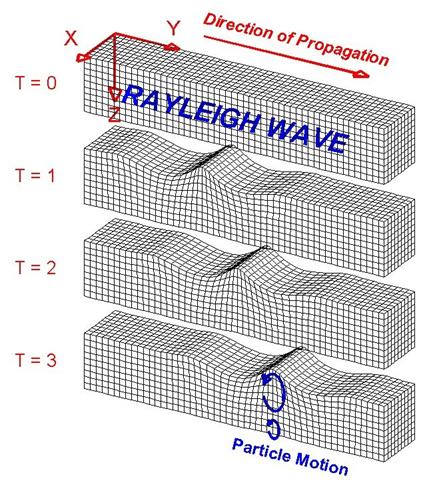 A love wave travels through a medium. Particles are represented by cubes in this model.

A Rayleigh wave travels through a medium. Particles are represented by cubes in this model.

6) The destructive power of Tsunamis is all because of the topography of the seafloor near the shore, and is bound to increase in the future. Discuss.(250 words)

In a recent scientific research paper, it has been claimed that climate change will increase the destructive power of the tsunamis. It is pertinent under these circumstances to discuss about Tsunamis as well as the research findings.

Discuss- This is an all-encompassing directive which mandates us to write in detail about the key demand of the question.

Introduction- Write a few lines about the nature of tsunami waves and how they are caused.

E.g Tsunami waves are huge waves – generally on oceans, but sometimes in lakes or large rivers caused by sudden motions, which displace a large amount of water like  an earthquake, a volcanic eruption or underwater landslide.

Topography of the seafloor near  the shore affects the power of Tsunamis:-

7) Discuss how information about the Central and state legislatures of India can be made more accessible to the public.(250 words)

The question wants us to write in detail as to how information about the workings of the central and state legislatures should be made more accessible to the public.

Discuss the ways in which information can be shared in a better way. E.g  all information with the legislatures needs to be indexed, catalogued and computerised, with online access to all citizens and supply on demand. This access should be provided as part of the proactive disclosure requirement under RTI Act;  Parliamentary (Legislative) questions, proceedings of various committees, follow up action on the reports of CAG, action taken reports submitted by the government are a few vital mechanisms for such legislative oversight. However, except through media reports, the citizens rarely have direct access to such information. This lacuna needs to be addressed by making all such information available to the public both online (electronic) and on demand (print).;  a computerised tracking mechanism, so that the legislators as well as the general public can trace the sequence of events and compliance by the executive agencies on matters like petitions, CAG reports and action taken on reports of enquiry commissions or House committees etc.