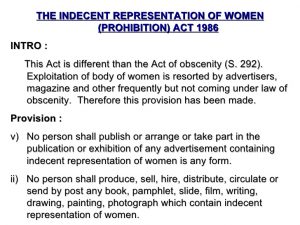 Context: After taking into account of the recent technological advancement in the field of communications such as social media platforms, etc, the Ministry of Women and Child Development has decided to move fresh Bill to broaden the scope of the Indecent Representation of the Women (Prohibition) Act, 1986 to cover the audio-visual media and content in electronic form.

The reformulated Bill proposes following amendments in the parent Act:

Need for revisiting the law:

The Government of India has enacted the Indecent Representation of Women (Prohibition) Act (IRWA), 1986 to prohibit indecent representation of women through advertisements, publications, writings, paintings, figures or in any other manner.

Representation of the People (Amendment) Bill, 2017

Context: Lok Sabha has passed Representation of the People (Amendment) Bill, 2017 to extend the facility of ‘proxy voting’ to overseas Indians, on the lines of service voters.

The Bill proposes to allow non-resident Indians (NRIs) to emerge as a decisive force in the country’s electoral politics on their own terms. The amendment paves the way to remove an “unreasonable restriction” posed by Section 20A of the Representation of the People Act, which requires overseas electors to be physically present in their electoral constituencies to cast their votes.

Section 20A of the Act provides for registration and inclusion of overseas electors in the electoral rolls. The Registration of Electors Rules, 1960 provide for overseas electors to register themselves in the electoral rolls of their respective constituencies on the basis of self-attested copies of their passport and valid visa, and exercise their franchise in person on production of the original passport at the time of voting at the specified polling booth.

Thus, the rules demand for the physical presence of overseas electors in their respective polling stations in India on the day of polling. This causes hardship to the overseas electors. This amendment proposes facilitating an external mode of voting, that is, voting by proxy, whereby such electors can exercise their franchise from their places of residence abroad.

If the Bill is passed, overseas voters can appoint a proxy to cast their votes on their behalf, subject to certain conditions to be laid down in the Conduct of Election Rules, 1961. This would considerably mitigate the difficulties presently faced by overseas electors in exercising their franchise.

What is voting by proxy?

According to the provisions of ‘Representation of the People Act (Amendment) Bill, 2017 overseas Indians, who are entitled to vote in India, can appoint a proxy voter to cast their votes on their behalf. Also, the overseas Indians would be allowed to use the option of proxy, which till now was only available to service personnel.

Drawbacks of the proxy voters:

For Prelims and Mains: PARIVESH- key features and significance.

What is it? It is an environmental single window hub for Environment, Forest, Wildlife and CRZ clearances launched recently. This Single-Window Integrated Environmental Management System has been developed in pursuance of the spirit of ‘Digital India’ initiated by the Prime Minister and capturing the essence of Minimum Government and Maximum Governance.

Significance and benefits of the platform: 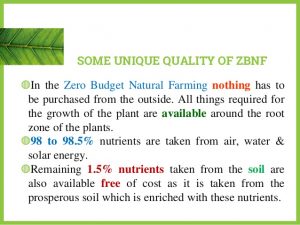 What is Zero Budget Natural Farming?

Zero Budget Natural Farming, as the name implies, is a method of farming where the cost of growing and harvesting plants is zero. This means that farmers need not purchase fertilizers and pesticides in order to ensure the healthy growth of crops. It is, basically, a natural farming technique that uses biological pesticides instead of chemical-based fertilizers. Farmers use earthworms, cow dung, urine, plants, human excreta and such biological fertilizers for crop protection. It reduces farmers’ investment. It also protects the soil from degradation. 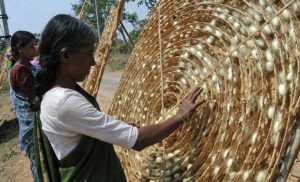 Context: Central Silk Board (CSB) has notified recently developed races of silkworm seed of mulberry and Vanya silk for increasing the productivity of cocoons and to increase the income of the farmers engaged in sericulture.

Multivoltine x Bivoltine Mulberry hybrid (PM x FC2) race of silkworm can produce 60 kg per 100 Dfls and the race is better than earlier race PM x CSR. Due to high quality silk and significant egg recovery, this race is suitable for the farmers of Karnataka, Andhra Pradesh, Tamil Nadu, Telangana and Maharastra.

Silk worm breeds for specific agro-climatic condition are essential for increasing the productivity of cocoons. The recently notified silkworm races will improve the income of the farmers by its enhanced productivity and quality.

Central Silk Board (CSB) is a Statutory body established in 1948 by an Act of Parliament. It is working under the administrative control of Ministry of Textiles, Government of India. 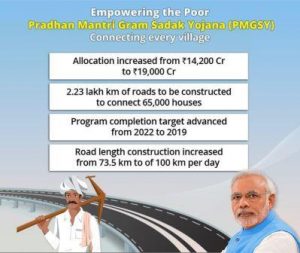 Initially the targets of PMGSY were to be achieved by March 2022, however, the sunset date of achievement of PMGSY-I was pre-poned to March, 2019, with enhanced fund allocation and changed funding pattern i.e. in the ratio of 60:40 between the Centre and State for all States except for 8 North Eastern and 3 Himalayan States (Jammu & Kashmir, Himachal Pradesh & Uttarakhand) for which it is 90:10.

Context: Transport Ministry Notifies Colour for Registration Mark of Battery Operated Vehicles. The Ministry of Road Transport and Highways has notified amendments to Central Motor Vehicles Rules, 1989 to this effect. 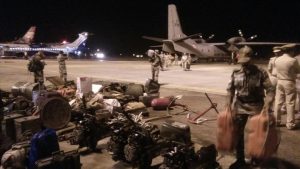 What is it? Operation “Madad” has been launched by the Southern Naval Command (SNC) at Kochi since 09 Aug 2018 for assisting the state administration and undertaking disaster relief operations due to the unprecedented flooding experienced in many parts of Kerala, owing to incessant rainfall and release of excess water from Idukki and other dams.