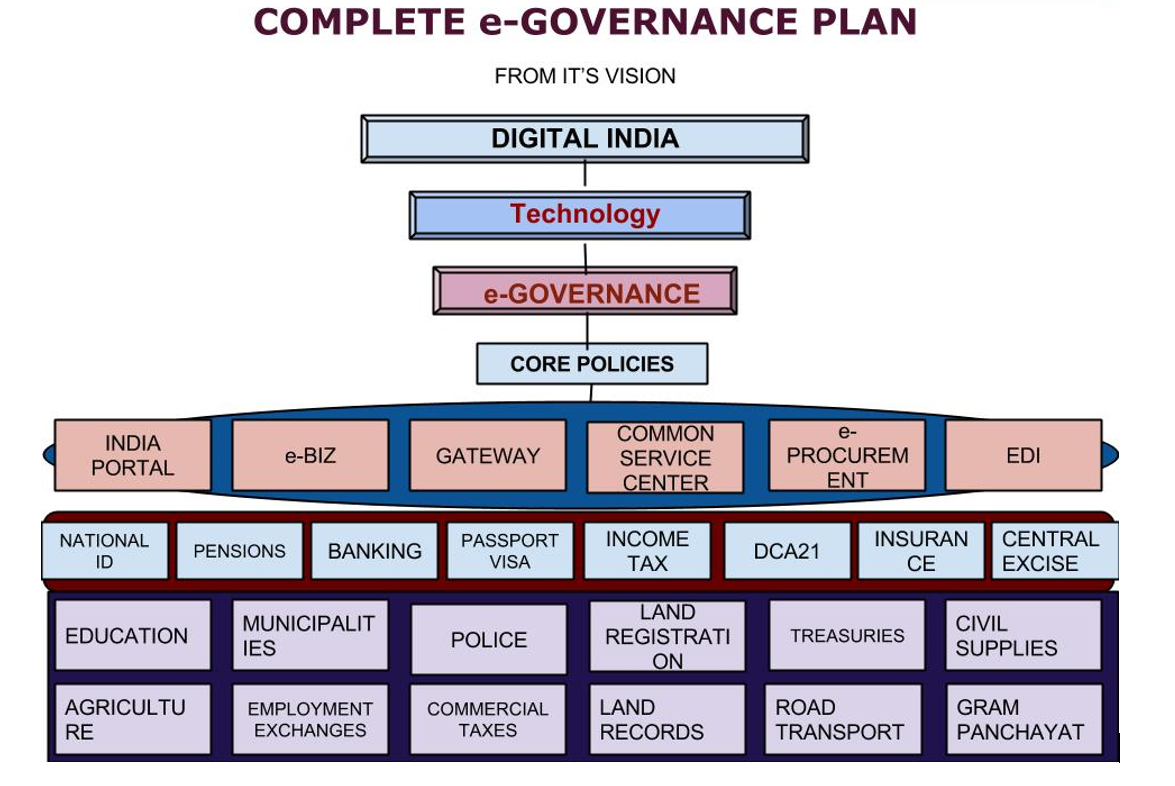 Digital India might be the biggest push towards inclusive e-governance in India. But the history of e-governance goes back to the 1970s, when the government established the Department of Electronics, followed by the National Informatics Centre.

Maharashtra was the first state to have a dedicated e-governance policy.

Many years ago, in a bid to evangelise the use of the Internet in India, a global technology giant decided to ‘seed’ some non-traditional locations in India with Internet access-enabled devices and free WiFi. These ‘non-traditional’ locations included schools in low-income areas, and slums.

NeGP aims to make all government services available to citizens via electronic media. NeGP has been formulated by the Department of Electronics and Information Technology (DeitY) and Department of Administrative Reforms and Public Grievances (DARPG).

How Services evolved over a period of time:

Sometime later, Some enterprising individuals had started offering a whole host of ‘services’, using this free Internet access, to other, more technologically challenged, neighbours for a small fee.

From downloading, printing and selling application forms for various government services such as ration card and water connection to downloading movies to CDs, they had managed innovative ways to use the Internet and profit from it.

Private services made a push for Government Participation:

Nevertheless, the bulk provided genuine and clearly needed services to people who otherwise had to depend on agents and touts for securing access to basic services that they were, at least on paper, legally entitled to.

In fact, such learnings eventually prodded the government to reluctantly push forward with not just e-governance initiatives, but deliver access to e-governance through measures like the ‘e-seva kendras’ which facilitate e-form submissions, e-filings and e-payments for government services.

Unfortunately, while there is much talk of pushing the cause of e-governance in India, actual progress has been slow.

One can access most government service providers electronically to get bills and make payments. With the introduction of the GST network, one can now pay almost all your taxes electronically, file returns, claim refunds, and so on.

The UN E-Government Development Survey is the only global initiative to measure and track how governments are faring on the e-governance front.

Areas that have to need improvement with e-governance:

However, in other areas like public health and land records, the progress has stopped with putting up some downloadable forms online. Many government departments still insist on physical forms and signatures, despite the near universalisation of an identity instrument like Aadhaar, which allows simple and fool proof authentication.

This is probably why India continues to rank a relatively low 96 in the United Nation’s E-Government Development Index, whose 2018 rankings were released last week.

That is probably because there is little to write home about, despite the astonishing pace of digitisation in India.

While not as general as the EGDI, the EPI looks at issues like e-information, e-consultation and e-decision making to arrive at a score.

Linkages between e-governance and poverty alleviation:

Unfortunately, the form of crowd-sourced public planning appears to have been just a flash in the pan.

As India catapults towards a cashless and digital economy and as human interface between service providers and end users gives way to digital, it becomes imperative to ensure accessibility for inclusion.

Knowledge is power, but access to knowledge is another kind of power. This is where digital can be a great disruptor.

With the India Stack (Aadhaar, UPI, etc. aimed at ensuring presence-less, cashless and paperless service delivery), and the ongoing mobile and broadband revolution, India can become a world leader in e-governance. But it may have to learn some lessons from Iran and South Korea first.

It becomes our collective responsibility to ensure inclusive development, one that engages all stakeholders through a pragmatic and judicious combination of interventions while effectively leveraging technology to ensure truly inclusive and sustainable development.