Context: Common Service Center (CSC) and National Health Accounts (NHA) have signed a memorandum of understand to implement the Ayushman Bharat scheme through three-lakh CSCs across the country.

As per the MoU:

Ayushman Bharat is the National Health Protection Scheme, which will cover over 10 crore poor vulnerable families (around 50 crore beneficiaries) providing coverage of up to ₹5 lakh (per family per year) for secondary and tertiary care hospitalisation.

Coverage: The scheme has the benefit cover of Rs. 5 lakh per family per year. To ensure that nobody is left out (especially women, children and elderly) there will be no cap on family size and age in the scheme. The benefit cover will also include pre and post-hospitalisation expenses.

Role of state governments: State Governments will be allowed to expand AB-NHPM both horizontally and vertically. States will be free to choose the modalities for implementation. They can implement through insurance company or directly through Trust/ Society or a mixed model.

It will be an entitlement based scheme with entitlement decided on the basis of deprivation criteria in the SECC database. For Prelims and Mains: Highlights of the Bill.

Context: Lok Sabha has passed the Homoeopathy Central Council (Amendment) Bill 2018. It seeks to replace the Central Council of Homoeopathy (CCH) with a board of governors and is aimed at bringing accountability and quality in homeopathy education system.

For Prelims and Mains: Strategic Trade Authorisation-1 status- what does it mean and how is it helpful for India?

Context: The US has given India Strategic Trade Authorisation-1 status.

What is Strategic Trade Authorisation (STA)?

STA allows for license exception with regards to exports from the US. This type of US government authorisation allows a certain item to be exported under defined conditions without a transaction-specific license.

Looking at current exports from the US to India, 50% of those are eligible now under STA-1. This can free up $2.1 billion in trade, make US exporters more competitive in the global marketplace, help provide India more advanced US technology.

India is the only South Asian nation on the STA-1 list that has 36 countries. Other Asian countries designated as STA-1 are Japan and South Korea. Till recently, India was classified as an STA-2 country along with seven others. Context: Rajasthan has become the first State in the country to implement the national policy on biofuels unveiled by the Centre in May this year.

The policy lays emphasis on increasing production of oilseeds and establish a Centre for Excellence in Udaipur to promote research in the fields of alternative fuels and energy resources. Context: TESS (Transiting Exoplanet Survey Satellite) has officially started its science operations. Its first observations will be transmitted back to Earth at some point in August, after which it will continue to send in new information for the next two years, at least.

TESS was launched on April 18th with the help of a SpaceX Falcon 9 rocket which sent the satellite into an elliptical orbit around Earth. 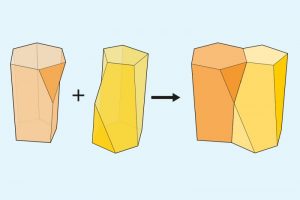 For Prelims and Mains: Scutoid and its features, significance of the discovery.

A scutoid is a solid geometric shape, like a cube or a pyramid, which had not been described until now. The epithelial cells adopt this form when the tissue curves, giving it a more stable structure. It could be said that they look like ‘twisted prisms’.

These new and beautiful shapes are the solution that nature has found to fold and curve the epithelia, which lines the outer surfaces of organs.

What are epithelial cells?

The epithelial cells are the construction blocks with which an organism is formed. They are like ‘pieces of Tente or Lego from which animals are made.

This study opens the door to understanding how organs are formed during their development and what might be missing in some diseases in which this process is altered.