Topic– Modern Indian history from about the middle of the eighteenth century until the present- significant events, personalities, issues

1) Discuss how gender inequality came to be recognised as inequality in the Indian context, and the kinds of responses that this recognition produced.(250 words)

Gender inequality is an important issue and it is important to know how this issue came to be recognized in Indian society and what responses it generated from the society.

The question wants us to write in detail about the issue of gender inequality in India and when and how it came to be recognized as inequality at the level of masses.

The question expects us to mention in brief about FC and iSC, the nature of centre state executive relations and how SC and ISC prove helpful in this regard.

Introduction – Mention that India is a federal country and several scholars add a unitary bias to the description. Managing centre state administrative relations has been a source of contention , and ISC and FC play a key role in this regard

Conclusion – Summarize arguments made above and give way forward.

3) Examine the opportunities and threats in India’s maritime partnership with ASEAN?(250 words)

China’s enhancement of its naval power, and its growing strategic presence in Indian ocean has led India to out special emphasis on maritime partnership with littoral countries of Indian ocean. ASEAN plays a key role in that partnership and this question wishes to explore this aspect.

The question expects us to examine the overall nature of India’s maritime cooperation with ASEAN with special emphasis on the opportunities in this area which can enhance the nature of this relationship. Also, we need to discuss the threats and ways to counter that threat.

Examine – When you are asked to examine, you have to probe deeper into the topic,  get into details, and find out the causes or implications if any.

Introduction – Discuss the emphasis India has put on maritime cooperation with nations both at a bilateral level and through forums like IORA etc.

Conclusion – Discuss the importance of growing this partnership and the way forward.

4) Prevention of Corruption (Amendment) Bill, 2018  has been designed not to punish corrupt officials but to let them get away. Critically comment.(250 words)

Corruption in India is a fact of life. We witness it in our everyday lives and there is a dire need to reduce corruption in indian society. Therefore it is important to discuss the desirability and effectiveness of any such attempt made in this direction.

The question wants us to dig deep into the Prevention of Corruption (Amendment) Bill  and bring out whether it will instead of punishing corrupt officials let them get away with corruption.

Comment- here we have to express our knowledge and understanding of the issue and form an overall opinion thereupon. Our opinion is to be based on a discussion which elucidates our arguments/ facts/ examples in its support.

Introduction- Write a few lines about the gravity and pervasiveness of corruption in Indian society- present a few statistics like our ranking in transparency international index etc.

Conclusion– Express your opinion as to what should be done in this regard- e.g bring out the role of technology and need to adopt best practices from other countries, empowering people and local government etc. 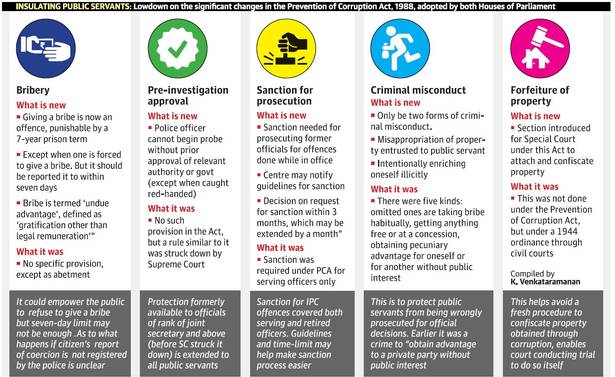 5) Africa is at a critical juncture and India could play many roles in its growth story. Examine the above statement and discuss the challenges for India vis a vis China?(250 words)

With PM Modi’s 3 nation Africa tour on the anvil, India Africa relations is going to dominate news . this makes it important for us to delve deeper into the relationship, understand challenges and discuss way forward.

The question expects us to mention what is it about Africa that is attracting several countries who are competing for enhancing their presence in Africa. Thereafter analyze India’s economic, cultural etc relations with Africa and analyze why China among other countries is a major competitor for India in deepening ties with Africa.

Examine – When you are asked to examine, you have to probe deeper into the topic,  get into details, and find out the causes or implications if any.

Introduction – Mention about a brief history of the upswing in relations between India and Africa with growth of India Africa Forum Summit etc.

Conclusion – emphasize on the importance of this partnership and the way forward for India.

Africa is at a critical juncture:-

Nature of the relationship so far:-

The relationship changed and there are areas where both India and Africa can work together:-

Topic– Ethics and Human Interface: Essence, determinants and consequences of Ethics in human actions; dimensions of ethics; ethics in private and public relationships.

The question wants us to to simply describe the meaning and the salient aspects of logical positivism. It also wants us to write in detail about its association with the ethics- how it describes  and understands the ethics.

Discuss- This s an all-encompassing directive which mandates us to write in detail about the key demand of the question.

Introduction– write a few lines about logical positivism- its birth as a philosophy, its other names, Its primary concern and key proponents like Moritz Schlick, Rudolf Carnap etc.

Association of logical positivism with the ethics:-

7) Do you think politics based on identity is gaining prominence world over? How can the attitude of people be changed towards different races?(250 words)

Mesut Ozil’s retirement again brings to the forefront the simmering racial tension in European societies. Racial discrimination has dominated news headlines off late and is an issue that merits discussion from GS4 point of view.

The question expects us to analyze news of racial profiling and discrimination, issues related to immigration, the inevitability of multi racial societies etc for the first part of your answer. In the second part we need to discuss how can the attitude of people be made to change.

Introduction – Mention some incidents of racial profiling and discrimination from around the world to emphasize the magnitude of the problem.

Body – Discuss the severity of the issue and the way forward.

“I am German when we win, but I am an immigrant when we lose.” This statement by football player Mesut Ozil reflects the agony of dual-heritage players and shines a light on the role identity and race plays in modern-day society. Racism has been evident against other prominent sports players, hate killings in US , alarming rise in xenophobia, racism and intolerance  including anti‑Semitism and anti‑Muslim hatred etc.

Politics based on identity is gaining prominence world over :-

How can the attitude of the people be changed towards different races :-

Any society concerned with combating racism will necessarily be interested in promoting certain dispositions among its members: tolerance and decency, respect and fairness.