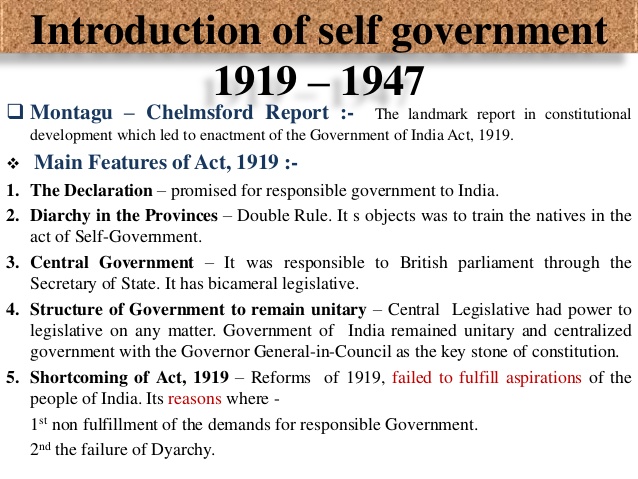 This month marks the 100th year of the publication of the ‘Report on Indian constitutional reforms’, commonly known as the Montagu-Chelmsford Report (MCR).

Edwin Montagu, then Secretary of State for India, had advocated for increased participation of Indians in the British Indian administration.

After many meetings with Indian representatives, Montagu and the then Governor-General, Lord Chelmsford, published the MCR on July 8, 1918.

The MCR stands out for proposing some of the most radical administrative changes and for giving provincial legislatures the mantle of self-governance.

To this extent, the report advocated the need “to emancipate the local governments and legislatures from central control; and to advance, by successive stages, in the direction of conferring responsible government on the provinces.”

The Montagu-Chelmsford Committee visited Madras Presidency to gather the views of political leaders and included the “creation of municipalities and local body institutions with sufficient autonomy to handle their local issues… bereft of the intrusive control of the Government.”

They further demanded that administration of the Presidency be eventually moved to the local legislature. To this end, they suggested that departments in administration be placed under the control of legislatures.

Ultimately, the MCR established the framework for devolution of powers and gave credence to the cry for self-governance. This cannot come as a surprise because the report recommended that “the Provinces are the domain in which the earlier steps towards the progressive realisation of responsible government should be taken”.

Another one of the most far-reaching objectives of the report was to elucidate the principle of accountable governance by directing that the “Government of India must remain wholly responsible to Parliament.”

Important Features of the 1919Act:

The reforms had many drawbacks:

However, in the 32nd session (Dec. 26-29, 1917) of the Indian National Congress, led by British theosophist Annie Besant, there was strong opposition to the Montagu declaration as something that “was unworthy of England to offer and India to accept.”

However, Besant later accepted the reforms as essential for the progress of British India. This was laid the platform for the development of a responsible government.

The MCR would go on to become the basis for the Government of India Act, 1935, and, ultimately, the Constitution.

The key principles of responsible government, self-governance and federal structure grew out of these reforms. Montagu-Chelmsford Report on Indian constitutional reforms is a watershed in India’s constitutional history.

The MCR on Indian constitutional reforms along with the Montagu Declaration are, thus, worthy claimants of the title of the Magna Carta of modern India.