Insights into Editorial: In need of a practical plan: on judicial appointments 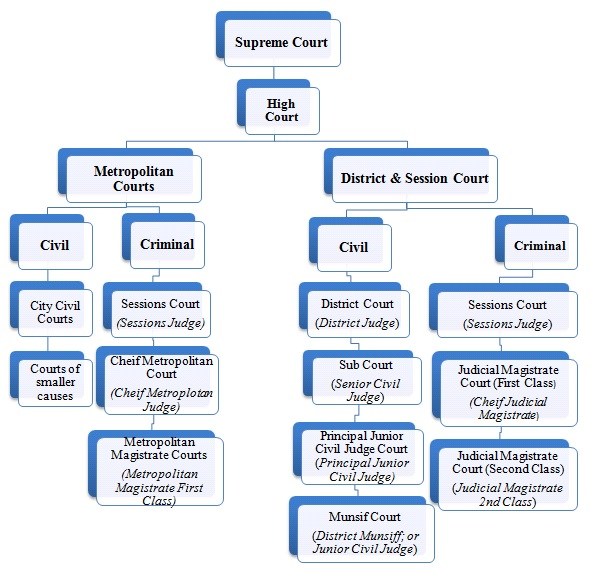 The Indian Judicial System is one of the oldest legal systems in the world today. It is part of the inheritance India received from the British after more than 200 years of their Colonial rule. The framework of the current legal system has been laid down by the Indian Constitution and the judicial system derives its powers from it.

There are various levels of judiciary in India—different types of courts, each with varying powers depending on the tier and jurisdiction bestowed upon them. They form a hierarchy of importance, in line with the order of courts in which they sit, with the Supreme Court of India at the top, followed by High Courts of respective states with District Judges sitting in District Courts and Magistrates of Second Class and Civil Judge (Junior Division) at the bottom.

Streamline the present examination process for the lower judiciary:

Recruitment to the lower judiciary has been under public scrutiny due to its failure to fill almost a quarter (23%) of vacancies that persist. The recruitment process of district judges is now the subject matter of a public interest litigation filed in the Supreme Court.

The matter has now come to a standstill given opposition by States to a centralised selection mechanism for judges.

This is not the first time that the Supreme Court has tried to streamline the examination process for the lower judiciary. In Malik Mazhar v. U.P. Public Service Commission (2008), it highlighted the importance of a prescribed time-schedule for judicial service examinations and laid down stage-wise time lines for lower judicial appointments — for civil judges (junior division) and district judges (direct recruitment) in 321 days and 183 days, respectively. An examination cycle is calculated from the date of notification to the last date for joining.

However, such a benchmark has three problems.

A clear timeline does ensure greater accountability. However, the Supreme Court offers no substantial justification for determining these timelines. From the order, it appears that these were based on suggestions from States and the amicus curiae in the case. With no clear, scientific principle or methodology offered, it ends up being a ‘one-size-fit-all’ timeline, which forces a comparison of States that are not similarly placed. This leads to the second issue.

The study covered direct recruitment of district judges and civil judges (junior division) and measured the performance of States in terms of the number of days taken (‘timeliness’) to complete a cycle, and the percentage of vacancies potentially filled.

But this timeline applies uniformly to States, regardless of sanctioned strengths. The timeliness measure in the report, when compared with data on sanctioned strengths in the lower judiciary, illustrates why this benchmark is inappropriate in measuring State performance.

To elaborate, States with lesser sanctioned strengths also see lower numbers of applicants and have a natural advantage in adhering to the timeline. Take the case of Himachal Pradesh and Maharashtra for example.

For civil judges, Himachal Pradesh and Maharashtra have a sanctioned strength of 62 and 1,118, respectively. Both must finish their recruitment cycles within 321 days. The study found that while Himachal could complete its cycle within an average of 178 days, it took 443 days for Maharashtra.

When benchmarked against the prescribed timeline, Himachal performs better than Maharashtra, but the comparison is unfair, given the wide variance in sanctioned strengths, and, therefore, the number of applicants.

The study also showed that of the top five jurisdictions on the timeliness metric for civil judges, Nagaland, Arunachal Pradesh, Himachal Pradesh (States) and Puducherry (Union Territory) have a sanctioned strength below 70. These States are quickest in completing recruitment cycles.

Evidently, the sanctioned strength influences the timeliness of the recruitment process.

Clearly, this court-stipulated timeline does not account for the structural and functional capacities of States. While one assumes there is greater capacity in larger States, there is no reason to persist with this assumption without empirical verification.

More importantly, there is no methodological justification in prescribing a uniform timeline without accounting for different capacities in States.

The 120th Law Commission of India report on Manpower Planning in Judiciary, 1987, contained significant suggestions for reducing pendency and, for the first time, suggested a judge strength fixation formula. It suggested that the judge-population ratio in India be increased immediately from the then ratio of 10 judges to 50 judges per million.

Nearly 2.8 crore cases are pending in the district and subordinate courts across the country and there are only 16,874 judges to try them — that’s around 1,540 cases per judge.

Another issue is Gender gap in Judiciary, only 28% of lower judiciary judges in the country are women, a first-of-its-kind study by Delhi-based Vidhi Centre for Legal Policy has revealed.

The lack of gender diversity is not limited to the lower judiciary. The Supreme Court has only seen six women judges in its six decades of existence, and currently has one woman judge out of 25 judges.

In the 24 High Courts across the country, just over 10% judges are women.

The issue of vacancies and pending cases are ingrained with not just one problem but many. They are:

Conclusion: For present “Examination process for the Lower Judiciary”:

While the idea of a definite timeline is undisputedly a good one, it should be flexible to suit the administrative and resource capacities of different States.

The Malik Mazhar guidelines could have easily ensured this by prescribing a standard which could be subject to State modifications rather than making them fixed. Currently, States can deviate from this timeline only by making an application to the Supreme Court. This curbs their flexibility.

Further, and more importantly, the court needs to adopt a more data-driven, methodological basis for such a timeline.

In a country like India where “JUSTICE” is the core principle of our constitution we cannot afford to deny justice to the people by not addressing the problems with the judiciary.

As the saying goes Justice delayed is Justice denied, government should stand by judiciary in helping to solve all the problems and find quick solution by providing sufficient structural resources needed.