Context: Justice Adarsh Kumar Goel has been appointed the chairperson of the National Green Tribunal (NGT).

About the National Green Tribunal (NGT):

What is it? NGT has been established under the National Green Tribunal Act 2010 for effective and expeditious disposal of cases relating to environmental protection and conservation of forests and other natural resources.

Ambit: The tribunal deals with matters relating to the enforcement of any legal right relating to environment and giving relief and compensation for damages to persons and property.

Sanctioned strength: currently, 10 expert members and 10 judicial members (although the act allows for up to 20 of each).

Chairman: is the administrative head of the tribunal, also serves as a judicial member and is required to be a serving or retired Chief Justice of a High Court or a judge of the Supreme Court of India.

Selection: Members are chosen by a selection committee (headed by a sitting judge of the Supreme Court of India) that reviews their applications and conducts interviews. The Judicial members are chosen from applicants who are serving or retired judges of High Courts.

Expert members are chosen from applicants who are either serving or retired bureaucrats not below the rank of an Additional Secretary to the Government of India (not below the rank of Principal Secretary if serving under a state government) with a minimum administrative experience of five years in dealing with environmental matters. Or, the expert members must have a doctorate in a related field.

Chief Justice of India as ‘Master of Roster’ 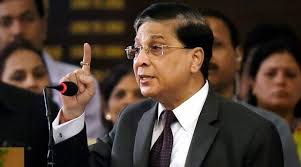 Context: The Chief Justice of India (CJI) is the “master of the roster,” the Supreme Court has reaffirmed, declining to accept former law minister Shanti Bhushan’s suggestion that the CJI consult his collegium colleagues –the top four judges after him in seniority –in allocating cases to various benches.

Position of CJI: CJI is the master of roster in allocating cases to different benches and his power cannot be delegated to collegium comprising of CJI and four senior most judges. Although the constitution is silent on the CJI’s role as the master of the roster, his power is based on a healthy practice and “convention aimed at maintaining discipline and decorum.” He is described as “first among equals.”

Moral responsibility of CJI: SC highlighted that the CJI owes a moral responsibility to his colleagues and the public at large while flexing his powers as ‘Master of Roster’ to allocate cases. “Absolute discretion” cannot be confined in just one man, the CJI.

Qualities for a CJI: The court listed some of the qualities a CJI should possess as the Master of Roster, including balance, fortitude, moral courage and independence of mind. Also, as the court’s spokesperson, it is the CJI’s duty to usher in and administer reform as a continuous process.

What does ‘master of the roster’ mean?

Undoubtedly, the chief justices enjoy a special status and they alone can assign work to a judge sitting alone and to the judges sitting in division bench or full bench. They have the jurisdiction to decide which case will be heard by which bench. If judges were free to choose their jurisdiction or any choice was given to them to do whatever case they may like to hear and decide, the machinery would collapse and the judicial work of the court would cease by generation of internal strife on account of hankering for a particular jurisdiction or a particular case.

Context: NITI Aayog has proposed creation of National Health Stack (NHS), a centralized health record for all citizens of the country, in order to streamline the health information and facilitate effective management of the same.

Need for a database:

The innovativeness of the proposed National Health Stack design lies in its ability to leverage a shared public good – a strong digital spine built with a deep understanding of the incentive structures of the system. Once implemented, the National Health Stack will significantly bring down the costs of health protection, converge disparate systems to ensure a cashless and seamlessly integrated experience for the poorest beneficiaries, and promote wellness across the population.

For Mains: NHS- need and significance. 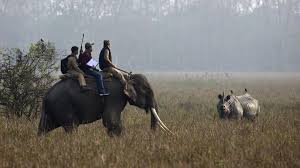 Context: The Uttarakhand high court has declared the entire animal kingdom, including birds and aquatic animals, as a legal entity having rights of a “living person”. The move aims to ensure “greater welfare” of animals.

A legal entity means an entity which acts like a natural person but only through a designated person, whose acts are processed within the ambit of law. This means the animal kingdom could be represented by a custodian.

As part of the judgment, the court has issued following directions:

The order came in response to a public interest litigation seeking directions to restrict the movement of horse carts/tongas between Nepal and India through Champawat district and highlighted that ailing, infirm and old horses were being abandoned by the owners in the Indian territory.

This order will go a long way in building a compassionate society as it was illogical to treat sentient creatures as inanimate objects.

Uttarakhand high court in March last year accorded the status of “living entity” to the Ganga and Yamuna rivers, a decision subsequently stayed by the Supreme Court.

Context: A battalion of Central government IAS officers has been drafted to ensure on the ground implementation as the Centre races to saturate 117 “aspirational districts” with seven flagship social welfare schemes by Independence Day.

At least 800 Deputy Secretaries, Under-Secretaries and Director-level officers, drawn from Ministries as diverse as Defence and Urban Affairs, have been assigned about 75 villages to visit, as part of the Extended Gram Swaraj Abhiyan (EGSA) from June 1 to August 15. In total, 49,178 villages — most with a majority SC/ST population — are being targeted.

Central officers could direct the local representatives to give immediate sanction for gas cylinders, bank accounts or electricity connections. The teams can also directly input the day’s progress into a data system.

Senior Ministry officials also make direct daily calls to a section of District Collectors to monitor progress, while third-party observers for each district —mostly from NGOs or academia — have been drafted in to do random checks of villages and report back to the Ministry.

The large-scale involvement of Central officers raises questions about the viability of such drives, and about roles in a federal democracy. Questions are being raised about Centre-State relations under this model, in an election year.

Direct connections to the district administration tend to bypass State administrations, while sending out large Central teams to do the work of local officials fails to empower local human resources.

Topic: Science and Technology- developments and their applications.

Context: The National Association of Software and Services Companies (Nasscom), India’s premier software lobby, has opened a Center of Excellence (CoE) for Data Science and Artificial Intelligence in Bangalore.

The center aims to “support SMBs, by fast-tracking their product development, provide market access to enterprises and assist them by co-creating programs along with other industry partners and start-ups to solve complex and real-world business problems.”

With the aim to strengthen the country’s AI ecosystem, the CoE and MoU, both aim to serve as a platform for intelligence-sharing and technology collaboration between stakeholders to build collective capabilities for the industry and country in the cutting-edge areas artificial intelligence. Context: India has agreed to form a joint venture with Sri Lanka to operate the country’s loss-making Mattala Rajapaksa International Airport in Hambantota.