Insights into Editorial: India needs both price and income support for farmers 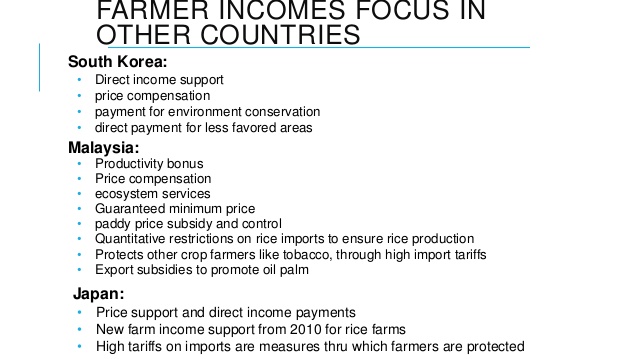 Since the Union Budget 2018-19, there has been a great deal of discussion in the public domain regarding the health of the rural sector. There is a need to believe that the rural sector needs some policy intervention, be it price support or income support.

As a case in point, the agriculture gross domestic product (GDP) deflator has declined from 9.9% in FY13 to merely 1.1% in FY18. Such a decline also coincides with the inflation-targeting regime introduced by the Reserve Bank of India (RBI) from FY13.

Given that prices in the Agriculture sector are at significantly low levels, there are three ways in which we can alleviate this, at least in the short term.

Let us analyse the pros and cons of all three schemes and suggest what could be done as a quick-fix solution to address the distress without impacting fiscal health and inflation much in the short term.

In the Union budget, the government has announced that for FY19, MSP for the majority of kharif crops and rabi crops that are left out will be fixed at 1.5 times the cost of production. Estimates show it is based on A2+FL (actual paid out cost plus imputed value of family labour).

With the government due to announce MSP for kharif crops in FY19, we estimated what could be the projected MSP for 13 major kharif crops, based on their projected A2+FL cost for FY19 (taken at the maximum growth during FY17-FY18 for any crop), and then applying 1.5 times on it.

Our estimate suggests that this increment in MSP by 1.5 times in kharif crops and remaining rabi crops could impact consumer price index (CPI) inflation by 71 basis points (bps).

For two major crops, wheat and rice, for which the majority of the procurement is done by the government, the increase in MSP will have less impact on inflation.

If the government settles on 1.5x C2 (comprehensive cost including imputed rent and interest on owned land and capital) cost, the inflationary impact could be significantly large, which could even breach the RBI’s CPI target (5%).

Given that MSP is only limited to certain crops, the government has also announced that it will develop an institutional mechanism in line with BBY, which has already been implemented in Madhya Pradesh (MP) for eight kharif crops in FY18.

Bhavantar Bhugtan Yojana (BBY) has attracted a lot of criticism, although we believe most of it was unwarranted.

Based on the analysis of all the three schemes, a proposal of a hybrid of two schemes viz. 1.5 times MSP and PCS. For cereals (wheat, paddy, ragi, maize, bajra) largely procured by both Central and state governments, we should continue to procure at MSP that is 1.5 times cost of production, as the impact on inflation and the fiscal situation will be minimal.

Additionally, crops like groundnut, sesamum, niger-seed and soyabean should also be covered under the 1.5 times MSP scheme, as they are procured to a limited extent (less than 10% of total production, which varies from state to state).

For pulses, (arhar, moong, urad, masur and gram) and sunflower seed, we propose that PCS be implemented, as adoption under this scheme will have very little impact on inflation and fiscal cost will be Rs13,110 crore. The agriculture investment support scheme, though very easy to implement and without leakages, should be avoided given that it would be a huge fiscal burden.

The recent initiatives taken by the Government are definitely steps taken in the right direction.

Recent developments further underscore the fact that India urgently needs to diversify its cropping pattern– this will help conserve moisture and thus help in judicious usage of resources.

Such an effort would involve the collective participation of various stakeholders, including the wider farming community, pressure groups, private sector, banking sector, and both the central and state governments.

The agreements signed between India and Israel further underscore the fact how water management, and judicious usage of limited resources is vital for a thriving agricultural sector.

Policy focus should be rather on investment — in efficient water management and irrigation, plant breeding and genetics, crop husbandry, market linkages and in breaking the middleman’s hold over the farm-to-consumer value chain, replacing it with farmer-led enterprises, whether cooperatives or producer companies, that allow farmers to capture a share of the value added to their produce along its journey to the factory or home.

We reiterate that the long-term solution to farmer distress would be improving the supply chain, establishing agro-processing zones and creating a better agri-logistic platform.

Efforts described above can further the objective of the Government of doubling farmer’s income by the year 2022.