Insights into Editorial: Cost of the missing women in Indian politics 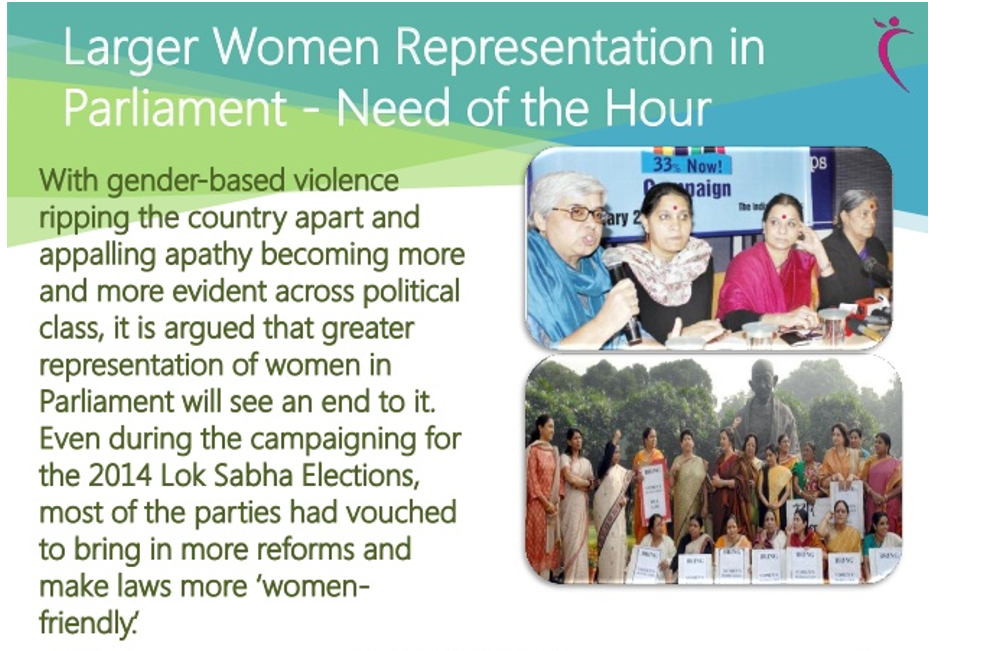 B.R. Ambedkar once said that “political power is the key to all social progress”. What, then, to make of the fact that India—a country where women suffer substantially greater socio-economic disadvantages than Western democracies like Spain—has a cabinet that is only 22% female and a Lok Sabha that has a meagre 12% female representation?

“Our dream of New India is an India where women are empowered, strengthened, where they become equal partners in the all-round development of the country.” Prime Minister Narendra Modi said in his Mann Ki Baat.

This represents the aspirations of millions of women in India; women who are not being restricted to participation in India’s development trajectory but are also leading it.

The Constitution of India guaranteed justice-social, economic and political, liberty of thought, and equality to all citizens. Constitution provided for equality of women and called State to take measures to neutralize the socio-economic, educational and political disadvantage faced by women.

In spite of the above provisions, participation of women in politics has not improved significantly. These are contradictory to the aims of the constitution. Given all this, the fact that the proportion of women in the Lok Sabha has seen only a paltry increase since independence—from 4.5% in the first Lok Sabha to the current 12% in the 16th Lok Sabha(2014)—is dispiriting.

The Economic survey for 2017-18 tabled in Parliament said factors such as domestic responsibilities, prevailing cultural attitudes regarding roles of women in society and lack of support from family were among main reasons that prevented them from entering politics.

“In a country like India with around 49 per cent of women in the population, the political participation of women has been low”.
The survey said there are developing countries like Rwanda which has more than 60% women representatives in parliament in 2017.

Political participation of Women in other countries:

At the global level also, only a few countries have equal participation of women in par with men in politics. In countries like Germany, Sweden, Norway, Denmark and Finland, women’s participation in the decision-making process is substantial.

The problems of lack of education and leadership training create a vicious cycle where socio-economic disadvantages lead to reduced opportunities for women to participate in the political process, leading to weakened representation—which, in turn, retards the process of addressing those socio-economic disadvantages. It’s a cycle that has been perpetuated for seven decades. It must be broken. There is a pressing need for education and leadership training to familiarize them with the local government functioning and instil in them a sense of agency.

Women’s Reservation Bill which reserves 33% of seats for Indian women at the legislatures has to be passed soon in the Parliament.

Gender stereotypes which perceive women as weak representatives should be changes through awareness and education. Efforts need to be taken to enhance the participation of women in governance in large numbers.

Women Panchayati members have to be trained to analyse and understand their roles and responsibilities given in the 73rd amendment act.

Women’s leadership and communication skills need to be enhanced by increasing female literacy especially in rural areas. They should be empowered in order to break socio-cultural barriers and improve their status in the society.