Insights into Editorial: Parched or polluted: on India’s water crisis 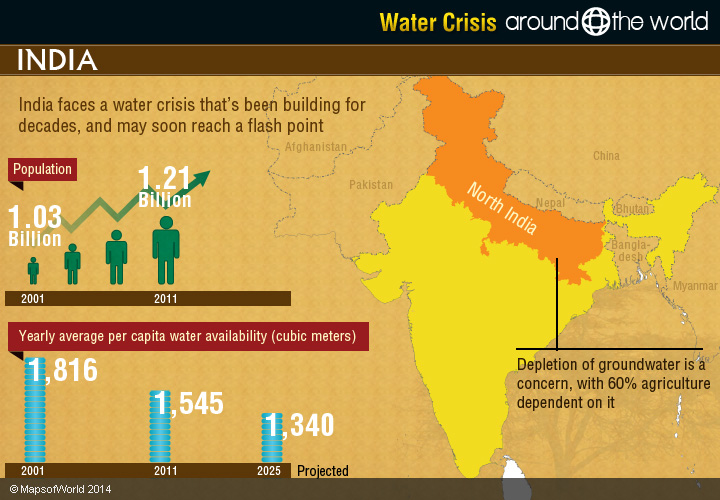 The NITI Aayog released the results of a study warning that India is facing its ‘worst’ water crisis in history and that demand for potable water will outstrip supply by 2030 if steps are not taken.

Nearly 163 million of India’s population of 1.3 billion lack access to clean water close to home, the most of any country, according to a 2018 report by Britain-based charity WaterAid.

Nearly 600 million Indians faced high to extreme water stress and about 2,00,000 people died every year due to inadequate access to safe water. Twenty-one cities, including Delhi, Bengaluru, Chennai and Hyderabad will run out of groundwater by 2020, affecting 100 million people, the study noted. If matters are to continue, there will be a 6% loss in the country’s Gross Domestic Product (GDP) by 2050.

The NITI Aayog’s observations are part of a study that ranked 24 States on how well they managed their water. Gujarat, Andhra Pradesh and Madhya Pradesh took the top three spots, in that order, and Jharkhand, Bihar and Haryana came in last in the ‘Non-Himalayan States’ category.

Himachal Pradesh, which is facing one of its worst water crises this year, led a separate 8-member list of States clubbed together as ‘North-Eastern and Himalayan.’

Increased population pressure along with competing demand for water from different sectors (drinking, agriculture, industry and energy).
The data published by the Central Water Commission indicate that agriculture alone accounts for about 85 per cent of all water use, mostly drawn from groundwater.

Poor water management techniques are the important reason attributed for prevalence of water crisis in India. In last six decades the successive governments have not given enough importance for proper water management. The only thing that has been done is construction of dams. But very less emphasis has been given for maintaining the quality and quantity of water in such water bodies leading to present water crisis.

At the same time, disputes between states are on the rise. Inter-state disagreements are on the rise, with seven major disputes currently raging, pointing to the fact that limited frameworks and institutions are in place for national water governance.

Improper attention given to management of watersheds in the country. The scientific way of managing water from watershed is well tested for positive results. Silting of wetlands is also a problem, with periodic silting and degradation the water retention capacity reduces significantly and adds to the crisis.

Another important issue that needs to be addressed, particularly in urban areas, is the leakage of pipes providing water. We cannot allow this to continue any longer. Putting in place an efficient piped supply system has to be top on the agenda of policymakers and planners.

Although India receives an average rainfall of 1,170 mm per year, it is estimated that only 6-7% of rainwater is stored.

Before the situation turns more alarming, we have to collectively act. We should remember that ancient India had well-managed wells and canal systems. In fact, our culture always believed in treating nature with reverence and most of our rivers are considered sacred.

The Indus Valley Civilization had a well-managed canal system, while Chanakya’s Arthashastra also talks of irrigation. In the ancient past, different types of indigenous water harvesting systems were developed across the subcontinent and such systems need to be revived and protected at the local level.

Micro irrigation practices like drip and sprinkler systems have to be promoted in a big way for efficient use of water for agriculture. Both in urban and rural areas, digging of rainwater harvesting pits must be made mandatory for all types of buildings.

The government needs to come up with solutions like changing the cropping pattern which requires less water and rectify the mistakes that are being done over years.

Other experts said that unless India woke up to its water crisis, disaster loomed. There is great awareness now about air pollution, however, India’s water crisis need to get that kind of attention. We need to be more responsible, sensible and prudent when it comes to the use of water and in understanding the sentiments of the people.

The government must give higher MSPs to less resource-intensive crops and fix its procurement policy. It must tell states that it will procure from their farmers if they keep water-productivity in mind; central procurement in Punjab should shift from paddy to, say, maize, while more paddy is procured from Bengal.

The government has come up with a Rs. 6,000-crore World Bank-aided Atal Bhujal Yojana with community participation to ensure sustained groundwater management in overexploited and ground water-stressed areas in seven States.

There needs to have a multidisciplinary approach involving various scientists and ecologists to devolve various water management techniques so that effective solutions are created than building dams and canals.

we need to connect with nature to help rebalance the water cycle in a sustainable and cost-effective way by planting new forests, reconnecting rivers to floodplains and restoring wetlands. Governments, communities, the private sector, and researchers must collaborate.

Conscious efforts need to be made at the household level and by communities, institutions and local bodies to supplement the efforts of governments and non-governmental bodies in promoting water conservation.

Sustained measures should be taken to prevent pollution of water bodies, contamination of groundwater and ensure proper treatment of domestic and industrial waste water. Reduce, reuse, and recycle of used water must be the watchwords if we have to handover a liveable planet to the future generations.