Insights into Editorial: Poverty and Health 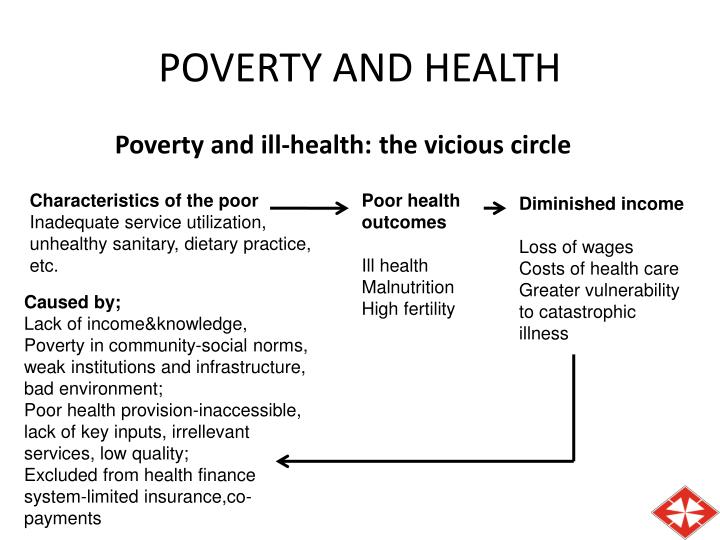 Poverty increases your chance of getting ill because of:

Healthcare system for the poor and under-privileged:

The state of India’s healthcare system is somewhat dichotomous — the country is a global supplier of life-saving, affordable and good quality generic medicines, yet lakhs of families are driven into poverty because they are forced to spend much of their earnings and savings on medications to treat chronic and life-threatening diseases.

The poor, particularly, spend disproportionately large amount of their income as out-of-pocket expenditure on healthcare, mostly to buy medicines and this has been known to India’s policy-makers for decades. Spending patterns of households on various items, including medicines and doctors, are routinely collected during the course of the Consumption Expenditure Surveys by the National Sample Survey Organisation.

The Health and Morbidity Surveys of the same organisation too have been a rich source of information on expenses incurred by the population on treating various ailments and diseases that include cancers, cardiovascular diseases and diabetes.

Now, a research paper published in the medical weekly BMJ has once again highlighted the sad condition of healthcare in India. It has estimated that about 5.5 crore people were pushed below the poverty line between 1993-94 and 2011-12 by out-of-pocket expenditure on healthcare.

Of further concern is that medicine purchase was the single largest component of OOP at 63 per cent and the rise in the proportion of population reporting any OOP payments to 80 per cent in 2011-12 from 60 per cent in 1993-94.

This has also meant that the share of healthcare expenditure in the Indian households’ consumption expenditure has risen from 4.8 per cent in 1993-94 to seven per cent in 2011-12.

The Centre’s intervention to control prices through Drug Price Control Orders has provided some relief in the past but with treatment protocols and drugs changing, that has not proved enough.

Although India has a public healthcare network ranging from primary health-care centres all the way to super-speciality hospitals, the basic network is poorly equipped, under-staffed and overcrowded, forcing people to look to private providers.

Innovative and path-breaking scheme in the history of public health in India. It may have a transformative impact if implemented in an effective and coordinated manner.

AB-NHPM will target about 10.74 crore poor, deprived rural families and identified occupational category of urban workers’ families as per the latest Socio-Economic Caste Census (SECC) data covering both rural and urban. The scheme is designed to be dynamic and aspirational and it would take into account any future changes in the exclusion/ inclusion/ deprivation/ occupational criteria in the SECC data.

It is hoped that the Ayushman Bharat Health Protection Mission, announced in the current year’s Budget and scheduled for rollout on August 15, will reverse the trend of rising OOP and increase access to quality healthcare and medication for the poor.

Only a universal health insurance programme, or provision of healthcare at subsidised rates, can ensure that large numbers of people are not driven to poverty by catastrophic medical expenses. For this to happen, besides the cost of medicines, both the Centre and States have to address the yawning gaps in India’s healthcare infrastructure.

The state and central agency will keep an eye that system is not distorted. For a system of this magnitude in any country, strong monitoring and governance system is required.  Help of IT and artificial intelligence will also be taken.

Moreover, there should be a link between institutions or hospitals, with health centres and the community as community engagement helps in planning and implementation of programme. The success of this mission depends on its design and execution, as well as top-down leadership to ensure that the stated goals are met.

This will lead to increased access to quality health and medication. In addition, the unmet needs of the population which remained hidden due to lack of financial resources will be catered to. This will lead to timely treatments, improvements in health outcomes, patient satisfaction, improvement in productivity and efficiency, job creation thus leading to improvement in quality of life.