Insights into Editorial: Rules for the Elders 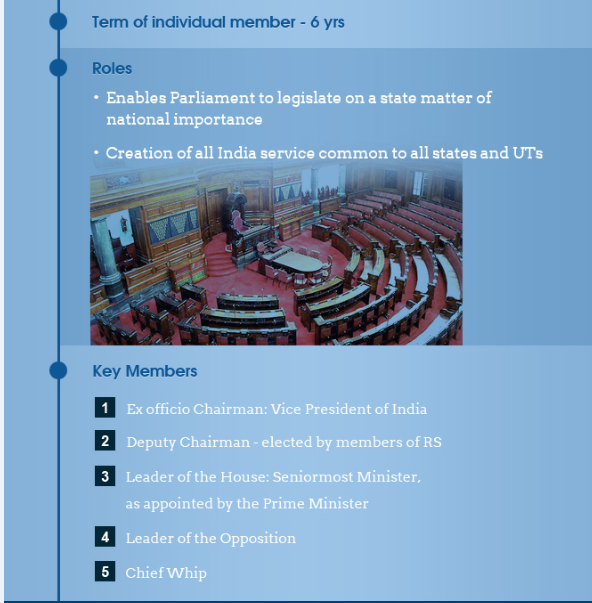 Vice President of India, Mr. Venkaiah Naidu appointed a two-member committee to make recommendations for revising the rules of the Upper House.

V K Agnihotri, former secretary general of the House, is heading the committee. Media reports suggest that the committee is mandated to submit its report in three months. The reports also indicate that the committee may give some of its recommendations before the monsoon session of Parliament.

The individual goals obstruct a highly needed mandate. Therefore, there is a need to establish rules as the British did to implement legislative sanctions.

Another important factor is waste of time. There is a need to establish a fast track methodology to reach unanimous decisions so that economy can move forward on the growth path.

The Upper House has turned into a tool for offering patronage. The smooth functioning is weighed down by other deficiencies like indiscipline, unwanted ruckus and absenteeism.

There is a need to have more responsible independent members who can contribute and bring a changed perspective to the functioning of the upper house. Also, they should not be biased in terms of party-political considerations.

In those instances when the lower house is unable to come up with the efficient discussion before passing a bill, Rajya Sabha plays its crucial role. It helps to explore more refined intricacies in the proposed policy.

These hidden details should ideally be discussed before the conversion of the proposal to a law. Rajya Sabha has to be there to clearly place the projects before the common man.

Rules Governing Both the Houses:

In 1952, these were the rules of the Constituent Assembly, the body which had framed the Constitution. Sarvepalli Radhakrishnan the first chairman of Rajya Sabha, amended these to be used as the rules of procedure.

Both Houses of Parliament have their own rules of procedure. These rules govern every detail of how the Houses function on a daily basis. They determine MPs’ participation in parliamentary proceedings while making laws, passing budgets, questioning the government and representing us.

These rules are the bulwark of our parliamentary democracy. For Parliament to be effective in its role, these rules require regular updating and strengthening. The Constitution, through,

Article 118(1), gives the two Houses of Parliament the power to make rules to regulate their functioning.

The Agnihotri committee has been set up at a time when the two Houses of Parliament are facing similar structural challenges.

So its recommendations, while meant for the Rajya Sabha, will also influence rule-making for the Lok Sabha. Four fundamental issues would require the committee’s attention.

There should be a periodic review of the rules of procedure of both Houses. The last such review for the Rajya Sabha happened in 2009, incidentally when Agnihotri was its secretary general. Nine years later, his committee again has the critical task of going beyond the symptoms of dysfunction and recommending changes to strengthen Rajya Sabha.

As federalism is deep-rooted in India and plays out in different ways, the Upper House too needs to reflect the views and divisions on the same criteria by its unique nature of party-political hegemony.

As India starts to discuss and introduce the next-gen of key economic reforms and as the deep-seated issues of market, property rights, human rights and redistribution reforms rule the political background, there is a need of more responsible members to take the nation on growth path. In the absence of accountability, no matter how many times new reforms are established, nothing is really going to work.

In addition to its role of representation and accountability, the Upper House must reflect the difference in our polity — difference marked not merely by its culture but its diversity.

Rajya Sabha Reforms are the very much need of the country.