Insights into Editorial: A triple blow to job guarantee scheme 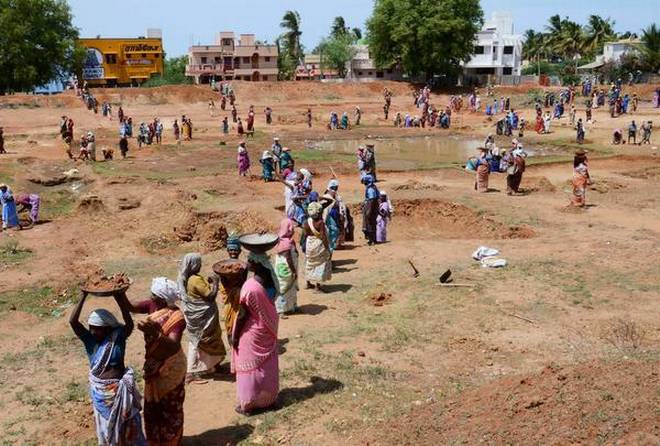 MGNREGA guarantee “Right To Work” for at least one member of family for 100 days annually , 150 days for SC/STs during non-agricultural seasons . Employment provided within 15 days of enrollment , failing to which the government will give unemployment wages to work-seekers

The objective of the Act is to enhance livelihood security in rural areas by providing at least 100 days of guaranteed wage employment in a financial year to every household whose adult members volunteer to do unskilled manual work.

MGNREGA is to be implemented mainly by gram panchayats (GPs). The involvement of contractors is banned. Labour-intensive tasks like creating infrastructure for water harvesting, drought relief and flood control are preferred.

MGNREGA stands out in its worker-centric legislation and stated emphasis on transparency and accountability. Several potentially progressive measures such as a real-time management information system have been put in place.

The scheme is meant to be demand-driven in the sense that the government is mandated to provide work within 15 days of a worker seeking work. Otherwise the worker is entitled to an unemployment allowance.

A second key provision of the Act pertains to payment of wages within 15 days of completion of work, failing which a worker is entitled to a delay compensation of 0.05% per day of the wages earned.

However, both these provisions have been routinely violated. There is an ongoing Public Interest Litigation in the Supreme Court (Swaraj Abhiyan v. the Union of India) concerning these violations. We look at three ways in which a lack of funds has led to a subverting of these provisions in letter and spirit.

The NREGA Sangharsh Morcha, which tracks the implementation of the act, found that 64%, 86%, and 99% of the orders for wages in February, March, and April, respectively, remained unprocessed. While non-payment or delays in payment are not new to MGNREGA, recent changes in the structure of wage payments have only worsened the problem.

First, budget allocation over the years has been insufficient. While there has been an increase in the nominal budget in the last two years, after adjusting for inflation, the budget has actually decreased over the years. The real budget of 2018-19 is much lower than that of 2010-11.

The government, in order to ensure “leakage proof payment” through the National Electronic Fund Management System (NeFMS), ordered that payments happen through a fund transfer order (FTO). Payments through Aadhaar-seeded bank accounts were also introduced subsequently. While ensuring that wages reach workers without any leakages is laudable, its practicability at the ground level as well as its implications remains a concern. Even as the execution of such measures can be improved over time, they reverse the process of decentralised participatory development.

Under the NeFMS, funds remain centralised in one account under the control of the Government of India, while the allocation of money to the implementing agencies is only notional.

The implementing agencies generate claims for wages as per the muster rolls through FTOs. After the generation of FTOs, the programme officer uploads them for payment. The process has debilitating weaknesses.

Reports from different states suggest that sometimes payments are not transferred to the accounts of the MGNREGA workers and suppliers for three to four months, even more in some cases, all due to pending FTOs. This is corroborated by growing evidence of pending wage arrears and material payments in many states.

A serious implication of this is the violation of the rights of workers who are entitled to receive full payment of their wages within 15 days of working in the programme. Without the “guarantee of payment,” the work programme loses teeth. Over time, it loses appeal among workers, who are then driven to more precarious forms of work and distress migration.

The poor need cash on a daily basis to meet their consumption needs, and are forced to turn away from the programme and look for alternative employment. This delay of payments and uncertainty about wages rob the soul of the programme.

Second, the centralised mechanism reverses the process of strengthening panchayati raj institutions, which, even after 25 years of being a part of federal constitutional arrangements, remain weak for lack of devolution of power, functions, and functionaries: the three Fs.

MGNREGA, in one stroke, provided all three. In many of the states, for the first time, gram panchayats opened bank accounts, and received money on a regular basis in their accounts. These processes that empowered gram panchayats became redundant after the introduction of the NeFMS and FTOs.

Delayed wage payments need immediate attention, but there is a need to revisit the wage policy as well. While the Ministry of Rural Development revises the wages on an annual basis based on the consumer price index for agricultural labourers, the minimum and actual wages for agricultural labour in many states are now higher than the MGNREGA wages.

Providing a minimum wage rate that is lower than the prevailing wage rate is only a de jure guarantee.

The third point is about stagnating MGNREGA wages. Delinking of MGNREGA wage rates from the Minimum Wages Act (MWA), 1948 has contributed to this.

MGNREGA wages are a less lucrative option for the marginalised, being lower than the minimum agricultural wages in most States. As primary beneficiaries of the Act, women, Dalits and Adivasis could be the most affected and pushed to choose more vulnerable and hazardous employment opportunities. Such contravention of the MWA is illegal.

The gram rozgar sevak, the backbone of the entire scheme, who works part-time, living in the same village, does not get paid on time. The technical assistants who make site visits are inadequate in number. The process of planning, which has to prepare works ready to use so that they can be on the shelf, so to speak, when demand arises, falls short.

Moreover, the design of almost every structure is based on model estimates rather than being site-based. This affects the quality and financial estimates of projects adversely.

Under the previous arrangement of a revolving fund, implementing agencies at each level had their own accounts and authorised signatories for making payments.

This was a devolutionary fund transfer arrangement to strengthen decentralised development by local institutions.

What this reflects is not only a legal crisis created by the Centre but also a moral one where the fight is not even for a living wage but one for subsistence. One hopes for a just order from the judiciary.

All these problems lead to work not starting on time, payments not being made on time—and also, reluctance on the part of field functionaries to accept demand applications.

Since the banking infrastructure in many rural areas is woefully bad, the presence of banking correspondents is absolutely necessary. Though this facility has been in place for quite some time, it is being implemented at a snail’s pace.

The state employment guarantee council, which is meant to oversee the functioning of this programme, is yet to be formalized. Most importantly, there is no way for the labourer’s voice to reach the higher officers since the helpline does not function well.

Clearly, it’s a mixed bag when it comes to MGNREGA. Much more needs to be done to get this programme to deliver on its promises.