Explanation: Highest above Earth’s Center: The Earth does not have the shape of a perfect sphere. Instead, its diameter is greatest near the equator. In the diagram above, the gray dashed line is a perfect circle, and the solid blue line represents the shape of the earth (exaggerated a bit to make its departure from spherical obvious). Chimborazo is located near the equator where Earth’s diameter is greatest. This makes the summit of Chimborazo the highest point above the center of the Earth.

Mauna Kea is over 10,000 meters tall compared to 8,850 meters for Mount Everest – making it the “world’s tallest mountain.”

a) Pull of the moon on the Earth’s Magnetic field

b) Tides caused by the gravity of the moon

(Hence answer is option B).

5) Identify the countries which border more than one ocean.

Block Mountains are formed by faulting. Block mountains also known as Horst. It is formed when the tensional forces causes the plates on the earth crusts to move apart. This movement causes the rocks to be stretched. Temperatures are low and the rocks are brittle. Instead of folding, they break into large blocks. (Hence statement 2 is incorrect).

Due to the compressional forces, the middle section of the rocks are uplifted, resulting it to be higher than the surrounding land.

An example of the block mountain is the Vosges in France and the Black Forest in Germany which are separated by the Rhine Valley.

Explanation : Lakshadweep islands consist of a group of tiny coral islands, located in the Arabian Sea, about 400 km from the main land (southern tip of the Indian Peninsula). The Union Territory of Lakshadweep consists of 10 inhabited islands, 17 uninhabited islands, attached islets, 4 newly formed islets and 5 submerged reefs. These islands are scattered in the Arabian Sea between North Latitudes 8o 00’ and 12o 13’N and east longitude 71o 00’ and 74o 00’E . These islands are typically a chain of low islands surrounding a shallow lagoon, consisting largely of recent sediments on top of older coral limestone.

a) Oceanic crust are much younger compared to Continental crust.

b) The oceanic crust is made of basalt and gabbro rocks

c) The Earth’s mantle is composed of ultramafic rocks

d) The largest portion of Earth’s volume is occupied by core.

Earth’s crust only accounts for less than 1% of the Earth’s interior.The Earth’s crust is the outer shell of the Earth. This is the part that has cooled down enough to solidify into rock. The crust extends down 30 km to 80 km underneath the continents, and only 5 km beneath the oceans. As you travel down through the crust, temperatures increase. The crust is broken up into several tectonic plates which “float” on top of the Earth’s mantle. In some regions, plates are sliding underneath one another, recycling rocks into the Earth. The crust beneath the middle of the oceans is spreading apart, and new material is welling up.

Beneath the crust is the largest part of the Earth’s interior: the mantle, which makes up about 84% of the Earth’s volume. This region extends down to a depth of 2,890 km. As you travel down through the mantle, temperatures increase immensely;

At the very center of the Earth lies the core. This is a solid sphere of metal 2,440 km across surrounded by a layer of liquid metal. Scientists think that mostly made of iron (80%), with the rest composed of other heavy metals, like nickel, gold, platinum and even uranium.

Explanation:  Moisture does not affect the wind speed and direction

This is the force generated due to the differences in horizontal pressure, and it operates from the high pressure area to a low pressure area. Since a closely spaced gradient implies a steep pressure change, it also indicates a strong wind speed. The wind direction follows the direction of change of pressure, i.e. perpendicular to the isobars.

Due to the earth’s rotation, winds do not cross the isobars at right angles as the pressure gradient force directs, but get deflected from their original path. This deviation is the result of the earth’s rotation and is called the Coriolis Effect or Coriolis force. Due to this effect, winds in the northern hemisphere get deflected to the right of their path and those in the southern hemisphere to their left, following Farrel’s Law. The Coriolis force changes wind direction but not its speed. This deflection force does not seem to exist until the air is set in motion and increases with wind velocity, air mass and an increase in latitude.

Due to inward acceleration of air towards the centre of rotation on the rotating earth, it is possible for the air to maintain a curved path (parallel to the isobars), about a local axis of high or low pressure. It is known as centripetal acceleration.

The irregularities of the earth’s surface offer resistance to the wind motion in the form of friction. This force determines the angle at which air will flow across the isobars, as well as the speed at which it will move. It may also alter wind direction. Over the relatively smooth ocean surface, the friction is minimum, so the air moves at low angles to the isobars and at a greater speed. Over uneven terrain, however, due to high friction, the wind direction makes high angles with, isobars and the speed gets retarded. 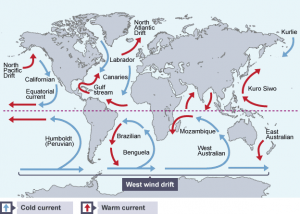 a) More than 200cm of annual rainfall.

b) Nutrient-rich and pH-neutral soil

Explanation : Most tropical rainforest soils relatively poor in nutrients. Millions of years of weathering and torrential rains have washed most of the nutrients out of the soil. Constant warmth and moisture promote rapid decay of organic matter. When a tree dies in the rainforest, living organisms quickly absorb the nutrients before they have a chance to be washed away. When tropical forests are cut and burned, heavy rains can quickly wash the released nutrients away, leaving the soil even more impoverished. Because of heavy leaching of bases the soil is acidic in nature

a) Liverpool and shanghai

b) New York and wellington

Explanation: Because of the circumnavigation of South America the distance is shortened to maximum between New York and San Francisco. In rest of the cases the proportion of distance shortened is lesser.

Which of the following are CORRECT?

Hot deserts are located on the Western margins of continents. (Hence statement 3 is incorrect).

Nomadism is important characteristics of deserts where people or tribe move place to place in search of pasture and food. (Hence statement 2 is correct).

Which of the following is CORRECT.

Sambhar is salt water lake in Rajasthan where evaporation exceeds the precipitation.

Of the rivers, Dhansiri, Doyang and Dikhu flow westward into the Brahmaputra.

The Tizu River, on the other hand, flows towards east and joins the Chindwin River in Burma.

GDPR seeks to create a harmonised data protection law framework across the EU and aims to give citizens back the control of their personal data, whilst imposing strict rules on those hosting and ‘processing’ this data, anywhere in the world. The Regulation also introduces rules relating to the free movement of personal data within and outside the EU.

GDPR would apply to all firms, regardless of their location, that process personal data of people living in the EU. Once in force, the GDPR would require companies to notify a data breach within 72 hours of the event.

What is the GDPR: https://www.ibm.com/analytics/us/en/technology/general-data-protection-regulation/; https://www.eugdpr.org;

22) Consider the following statements with reference to inflation trends in the Indian economy over the past few years:

1.The average Consumer Price Index has steadily declined since 2014-15

2.The average Wholesale Price Index declined in 2015-16 but has been rising since

23) The Technical Education Quality Improvement Programme (TEQIP) is run by

a) Ministry of Labour and Employment

b) Ministry of Human Resource Development

The Ministry of Human Resource Development has recruited more than 1200 highly qualified and motivated graduates from IITs and NITs among others to teach in Engineering Colleges in the most backward areas for the next 3 years.

Under this project (presently TEQIP-III, assisted by World Bank)), all Government engineering colleges are selected for direct intervention, and all private engineering colleges are selected for indirect intervention. The measures are institution-based (ex: governance reforms) and student-based (ex: improving the quality of teaching).

The above statements refer to:

Phytoremediation (‘phyto’ means plant) is a generic term for the group of technologies that use plants for remediating soils, sludges, sediments and water contaminated with organic and inorganic contaminants. Phytoremediation can be defined as “the efficient use of plants to remove, detoxify or immobilise environmental contaminants in a growth matrix (soil, water or sediments) through the natural biological, chemical or physical activities and processes of the plants”. Plants are unique organisms equipped with remarkable metabolic and absorption capabilities, as well as transport systems that can take up nutrients or contaminants selectively from the growth matrix, soil or water. Phytoremediation involves growing plants in a contaminated matrix, for a required growth period, to remove contaminants from the matrix, or facilitate immobilisation (binding/containment) or degradation (detoxification) of the pollutants. The plants can be subsequently harvested, processed and disposed.

1.The Parliament can amend a repealed legislation retrospectively

2.The finance bill, the passing of which by the Parliament is a part of enactment of the budget, is a money bill

Presently, consider statement 1 to be correct. Keep track of the news for any updates on this issue.

The Union government has, in the Budget, proposed to amend the repealed Foreign Contribution Regulation Act (FCRA), 1976, retrospectively, a move that will benefit the ruling BJP and the Congress held guilty by the Delhi High Court for receiving foreign funds from two subsidiaries of Vedanta, a U.K.-based company.  (The Representation of the People Act and the FCRA bar political parties from receiving foreign funds.)

In 2016, the government amended the FCRA through the Finance Bill route, allowing foreign-origin companies to finance non-governmental organisations and clearing the way for donations to political parties by changing the definition of “foreign companies”. The amendment, though done retrospectively, only made valid the foreign donations received after 2010, the year when the 1976 Act was amended. The retrospective amendment did not apply to donations prior to 2010.

Justification for Statement 2 (Stages in Enactment of Budget -> Chapter ‘Parliament’, Indian Polity by M Laxmikanth): The Finance Bill (not financial bill) is introduced to give effect to the financial proposals of the  Government  of  India  for  the  following  year.  It  is  subjected  to  all  the  conditions  applicable  to  a Money Bill.