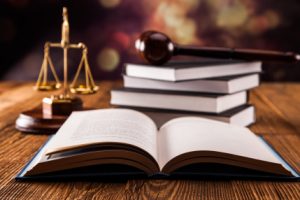 Context: The government is planning to have more benches of the National Company Law Tribunal on the basis of case load, amid rising number of insolvency cases coming up before the NCLT.

Currently, there are 11 NCLT benches in different parts of the country, including two in the national capital.

What is it? National Company Law Tribunal (NCLT) is a quasi-judicial body that will govern the companies in India. It was established under the Companies Act, 2013 and is a successor body of the Company Law Board.

Powers: NCLT will have the same powers as assigned to the erstwhile Company Law Board (which are mostly related to dealing with oppression and mismanagement), Board for Industrial and Financial Reconstruction (BIFR)(revival of sick companies) and powers related to winding up of companies (which was available only with the High Courts).

Background: The setting up of NCLT as a specialized institution for corporate justice is based on the recommendations of the Justice Eradi Committee on Law Relating to Insolvency and Winding up of Companies.

For Prelims and Mains: NCLT.

Section 8(1) of the Competition Act, 2002 (the Act) provides that the Commission shall consist of a Chairperson and not less than two and not more than six Members.

Context: The Union Cabinet has given its approval to the Protection of Human Rights (Amendments) Bill, 2018 for better protection and promotion of human rights in the country.

Salient Features of the Bill:

The Amendment will strengthen the Human Rights Institutions of India further for effective discharge of their mandates, roles and responsibilities. Moreover, the amended Act will be in perfect sync with the agreed global standards and benchmarks towards ensuring the rights relating to life, liberty, equality and dignity of the individual in the country. 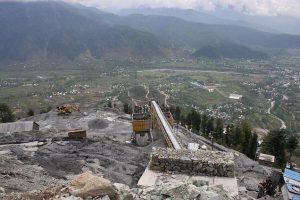 Context: Pakistan has informed the World Bank about India’s completing of the Kishanganga hydropower project during the bank’s “pause” period and has urged it to “recognise its responsibility” under the Indus Waters Treaty.

Pakistan has approached the World Bank, the mediator between the two countries of the water distribution treaty, in the past and raised issues over Kishanganga and Ratle projects in Jammu and Kashmir.

In December 2016, the world bank had announced that it had “paused” the process for either appointing a Court of Arbitration (COA) or a neutral expert and started mediation between the two countries on how to advance and develop consensus in the light of the treaty on the mechanism for resolution of faulty designs of the two projects. Since then, the bank has arranged two rounds of talks between the two sides.

The Kishanganga Hydroelectric Plant is an $864 million dam which is part of a run-of-the-river hydroelectric scheme that is designed to divert water from the Kishanganga River to a power plant in the Jhelum River basin. It is located 5 km north of Bandipore in Jammu and Kashmir, India and will have an installed capacity of 330 MW. Construction on the dam was temporarily halted by the Hague’s Permanent Court of Arbitration in October 2011 due to Pakistan’s protest of its effect on the flow of the Kishanganga River (called the Neelum River in Pakistan). In February 2013, the Hague ruled that India could divert a minimum amount of water for power generation.

The Ratle Hydroelectric Plant is a run-of-the-river hydroelectric power station currently under construction on the Chenab River, downstream of the village of Ratle in Doda district of the Indian state of Jammu and Kashmir. The project includes a 133 m (436 ft) tall gravity dam and two power stations adjacent to one another.

Context: India has voiced opposition to the “weaponization” of outer space, saying it should not become an area of conflict while calling for collective efforts to strengthen safety and security of the space-based assets. India voiced its concerns in the recently held UN Disarmament Commission (UNDC) session.

The United Nations Disarmament Commission (UNDC) is a deliberative body and a subsidiary organ of the UN General Assembly which is mandated to consider and make recommendations on various disarmament related issues and to follow up the relevant decisions and recommendations of the special sessions devoted to disarmament held so far.

At a time of growing mistrust and rising international tensions as well as numerous challenges to both the disarmament agenda and the disarmament machinery, the role of the UNDC as a platform for dialogue and cooperation assumes a greater significance. 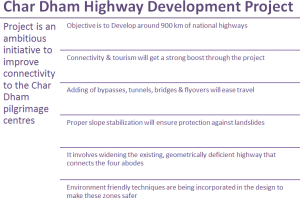 Context: Ministry of road, transport and highway (MORTH) in their affidavit submitted recently before the National Green Tribunal(NGT) in matter of Char Dham widening road in Uttarakhand stated that in all the total 53 projects/stretches of Char Dham, none is above 100 km which is why no environmental clearance was obtained.

A petition was filed which said that the entire project of 900 km was misleadingly fragmented into segments which are actually continuous stretches of five national highway to avoid environmental clearance. It stated that the criteria of Cumulative Impact Assessment and carrying capacity study must be followed for Himalayan terrain while considering any infrastructural projects.

The project involves developing and widening 900-km of national highways connecting the holy Hindu pilgrimage sites of; Badrinath, Kedarnath, Gangotri, and Yamunotri at an estimated cost of Rs.12,000 crores. The roads will be widened from 12m to 24m and the project will involve construction of tunnels, bypasses, bridges, subways and viaducts.

Context: ‘Internet Security Threat Report’ has been released by Symantec. Countries are ranked based on their vulnerability. These rankings are based on eight parameters – malware, spam, phishing, bots, network attacks, web attacks, ransomware and cryptominers. 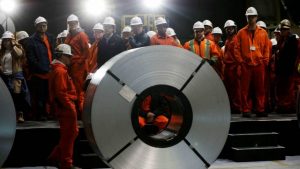 Context: India has overtaken Japan to become the world’s second largest producer of crude steel in February. Growth is attributed to Centre’s steps to curb imports, ‘Make in India’ among others.

Key facts: At present, China is the largest producer of crude steel in the world, accounting for more than 50% of the production.