d) None of the above.

2)Which of the following are CORRECT about World Environment Day

1.India, Pakistan and Afghanistan were admitted as full members of SCO in Ufa Summit-2015.

2.With full membership, India is likely to get greater access to major gas and oil exploration projects in Central Asia

3.2017-Summit was held in Astana with theme” One-Belt and one-road (OBOR)-A roadmap to economic Integration”

5)Consider the following statements regarding GSLV-MKIII.

6)Which of the following seeds is developed by state agricultural universities:

Nuclear seed : This is the hundred percent genetically pure seed with physical purity and produced by the original breeder/Institute /State Agriculture University (SAU) from basic nucleus seed stock. A pedigree certificate is issued by the producing breeder.

Breeder seed : The progeny of nucleus seed multiplied in large area as per indent of Department of Agriculture and Cooperation (DOAC), Ministry of Agriculture, Government of India, under supervision of plant breeder / institute / SAUs and monitored by a committee consisting of the representatives of state seed certification agency, national / state seed corporations, ICAR nominee and concerned breeder. This is also hundred percent physical and genetic pure seed for production of foundation seed. A golden yellow colour certificate is issued for this category of seed by the producing breeder.

Registered seed : Registered seed shall be the progeny of foundation seed that is so handled as to maintain its genetic identity and purity according to standard specified for the particular crop being certified. A purple colour certificate is issued for this category of seed.

The foundation and certified seeds can be multiplied at stage 1 and II, but the reproduction can not exceed three generations after breeder seed.

7) In light of various revolutions in India, which of the following are correctly matched:

Select the correct answer using the codes below. 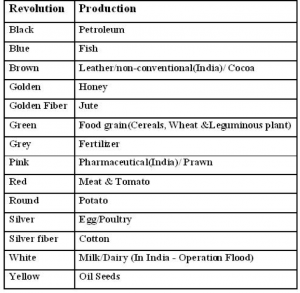 Assertion (A): Amartya Sen gave the concept of entitlements

Reason (R): He referred to poor having lack of choices and dignity

In the context of the above, which of these is correct?

a) A is correct, and R is an appropriate explanation of A

b)A is Correct, but R is not an appropriate explanation of A

c)A is correct, but R is incorrect

d)Both A and R are incorrect.

Amartya Sen talked about entitlements in the context of poor having no access to food during famines. He defines human development as people having choice and dignity.

a) Combat terrorists groups and terrorism from the world

b) Help end the AIDS epidemic

10) With reference to Global Initiative for Academic Networks (GIAN), consider the following sentences:

1.It is aimed to address the issue of teacher shortage in centrally recognized Indian institutions.

2.This program will exclusively focus on science technology and engineering studies

3.Both international and national teachers will be part of this initiative

Which of the statements mentioned above is/are correct?

The Global Initiative of Academic Networks (GIAN) is a new and catalytic programme of the Ministry of Human Resource Development, one with potentially far reaching impact. It is intended to enlarge and deepen the interface of India’s institutions of higher learning and globally recognised institutions of academic eminence. Over the next year or so, faculty from highly rated institutions abroad will visit India, interact and partner with their counterparts and with students, and deliver specialised courses.

12) MNCs can help the developing countries to:

(3) Finance a savings gap or balance of payments deficit

Select the correct answer using the codes below:

a) Demonetization and GST

b) Rise in interest rates

Until early 2016, India’s growth had been accelerating when growth in other countries was decelerating. But then the converse happened. The world economy embarked on a synchronous recovery, but India’s GDP growth—and indeed a number of other indicators such as industrial production, credit, and investment—decelerated. There are five reasons for this:

First, India’s monetary conditions decoupled from the rest of the world. Until the middle of 2016, real policy interest rates were following the global trend downwards. Since then, the downward drift has continued in most other countries, with rates falling. But in India, for the same period, average real interest rates increased. This tightening of monetary conditions contributed to the divergence in economic activity in two ways. First, it depressed consumption and investment compared to that in other countries. Second, it attracted capital inflows especially into debt instruments, which caused the increase in demand for rupee and consequently rupee appreciates which causes dampening of exports.

The second and third factors were one-off policy actions: Demonetization and GST. Demonetization temporarily reduced demand and hampered production, especially in the informal sector, which transacts mainly in cash. On the other hand, GST was introduced, affecting supply chains.

The fourth factor exerting a drag on the Indian economy was the TBS challenge. This has been a drag for some time and its effects have cumulated as the non-performing assets have increased, the financial situation of stressed firms and banks have steadily worsened. This has reduced investment and consequently economic activity and, hence growth.

The final factor was oil prices increase since 2017. It is estimated that a $10 per barrel increase in the price of oil reduces growth by 0.2-0.3 percentage points, increases WPI inflation by about 1.7 percentage points and worsens the CAD by about $9-10 billion dollars.

14) The economic survey points to the following anomaly

b) Formalization of work force

c) Expansion of tax base

15) Arrange the following in order of their occurrence

The twin balance sheet challenge is the major impediment to private investment and a full-fledged economic recovery. To address the challenges, Economic Survey recommends these four R’s.

16) The economic survey argues about shift from crony socialism to stigmatized capitalism in what context:

a) Exit problem or the Chakravyuha challenge

Coined by Arvind Subramanium in his speech and Survey. He was referring to the twin balance sheet problem and problem faced due to heightened risk to public sector banks because of stressed assets. He also stressed that this gives important insights into performance of India after LPG and a possible solution for public sector banks might just be more capitalism instead of a pro socialist approach.

17) The states which are open to trade fare better in terms of GDP. This holds true for both international trade and trade with other states. In light of this statement what do you mean by openness?

b) Easier norms for doing business and GST

c) Ratio of imports and exports to GDP

Openness is defined as exports + imports as a percentage of GDP. That is the more the state is connected to the outside world or with neighbours the higher is the state GDP.

18) The performance of Indian Industry is more egalitarian in world trade has a direct corollary that:

a) MSMEs contribute a significant more towards trade as compared to other countries.

d) All of the Above

That is exports are more egalitarian in India compared to similar placed countries. This says that largest firms in India do not dominate India’s exports and MSMEs also contribute more towards exports compared to other countries in similar income circumstances.

19) Which of the following is not true with respect to operation swarn:

a)It will have effect on punctuality of trains

b)It will lead to faster speeds of trains

Higher speeds are under mission Raftaar. Operation swarn is for overall improvement in passenger comfort and services. Major trains such as shatabdis and rajdhanis will be covered under the first phase.

Assertion (A): The Companies act 2013 provides for an agency for financial reporting

Reason (R):  All charted accountants will be empanelled in NFRA and action can be taken against them

In the context of the above, which of these is correct?

a) A is correct, and R is an appropriate explanation of A

b)A is Correct, but R is not an appropriate explanation of A

c)A is correct, but R is incorrect

d)Both A and R are incorrect

These are in context of NFRA – National financial Reporting Agency

This was proposed as a result of various scams highlighting role of charted accountants and failure of audit trail to correctly warn of these risks.

21) Which of the following is incorrect:

It is only for augmentation of infrastructure. There are separate schemes such as RISE for education and PMSS for healthcare. NIIF only covers problems of infrastructure finance where there is shortfall. That is need is estimated at around $4.5 trillion whereas estimated resource is only pegged at $3.9 trillion.

22)Which of the following statements about Sovereign Gold Bonds is correct?

c) There is no fund management fee

All the above are benefits even after introduction of long term capital gains in the Budget, SGB remains out of the purview of capital gains.

Which of the above are correct:

Source: Economy Module IPR are under the administrative control of DIPP under ministry of commerce and recently government tried to augment capacity of patent approvals by fast tracking hiring of patent examiners.

24) Under the essential commodities act which of the following is not true:

b) The center can only provide for a monitoring mechanism

It has power to regulate production, distribution, supply and price of the commodity. Essential commodities act 1955 aims to make available commodities in adequate number and regulate their availability during shortages. It also give action points to prevent hoarding and black marketing through instruments such as stock limits.

c) It is aimed at encouraging steel consumption in rural areas

d) It is for development of villages by IITs and IIMs

Solution: C
it has been launched by SAIL to boost consumption of steel in rural India.  This will result in better durability of assets created and also make them more prone to handle severe events through housing of better quality. It is aimed at encouraging steel consumption in rural areas