It is found in three styles named after the location where they are performed, ie. the Purulia Chau of Bengal, the Seraikella Chau of Jharkhand, and the Mayurbhanj Chau of Odisha. The dance is traditionally an all males troupe, regionally celebrated particularly during spring every year.

Context: The closing ceremony of Maitreyi Yatra was recently held.

What is it? The Maitreyi Yatra is an exchange programme for schoolchildren as part of a Memorandum of Understanding (MoU) between the J&K government and the Ministry of Human Resource Development.

Objective: The objective of this programme is to integrate the youth of Jammu and Kashmir to the rest of the country and to promote brotherhood and harmony. It provides a good opportunity for the youth of J&K to be acquainted with culture, language and development story of different parts of the country.

Organizers: The Student Exchange Programme is organized by Ministry of Human Resource development. Context: The Centre has decided to allow small finance banks and payment banks to offer the Atal Pension Yojana (APY), which is expected to significantly increase the coverage of the scheme. This is also expected to strengthen the existing channels of APY distribution.

Participation in APY not only builds a pensioned society but also adds sustainable fee income to banks by way of attractive incentive for mobilising APY. So far, 11 payment banks and 10 small finance banks have received licences from the Reserve Bank of India to start banking operations in India.

The Central Government would also co-contribute 50% of the total contribution or Rs. 1000 per annum, whichever is lower, to each eligible subscriber account, for a period of 5 years, that is, from 2015-16 to 2019-20, to those who join the NPS before 31st December, 2015 and who are not members of any statutory social security scheme and who are not Income Tax payers. China has released its Arctic Policy. The document draws a picture of how China views the economic possibilities the region offers. With this, China has vowed to actively participate in Arctic affairs as a “near-Arctic State” and a major stakeholder in the Arctic.

As per the policy, specifically, China will mainly focus its attention on four aspects:

Although Beijing maintained that China’s Arctic policy is based on the principle of “respect, cooperation, win-win results and sustainability,” some analysts have raised concerns over China’s increasing prominence in the region.

China is an important stakeholder in Arctic affairs. Geographically, China is a ‘Near-Arctic State’, one of the continental States that are closest to the Arctic Circle. The natural conditions of the Arctic and their changes have a direct impact on China’s climate system and ecological environment, and, in turn, on its economic interests in agriculture, forestry, fishery, marine industry and other sectors. 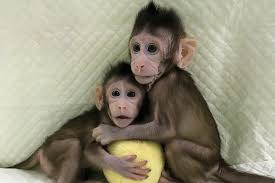 Context: Shanghai scientists have created two genetically identical long-tailed macaques. The monkeys are named Hua Hua and Zhong Zhong, a version of the Chinese adjective Zhonghua which means the “Chinese nation” or “people.” This could be an important tool in medical research for understanding disease in a species genetically more comparable to humans.

This is for the first time that scientists have created cloned primates using the same complicated cloning technique that made Dolly the sheep in 1996. The technique is called somatic cell transfer, or SCNT.

Overall, are these the first primates to be cloned?

Overall, these two are not the first primates to be cloned. Scientists in 1999 created Tetra, a rhesus monkey, but used what researchers consider a simpler cloning method that produces a more limited number of off spring. In Tetra’s case, scientists split the embryos, much like what happens naturally when identical twins develop.

About somatic cell transfer, or SCNT:

Under this technique, scientists reconstruct an unfertilized egg. The researchers remove the egg’s nucleus — the part of the cell that contains most of its genetic information– and replace it with the nucleus from another cell. It’s then stimulated to develop into an embryo, which is transplanted into a surrogate mother. That same cell cluster can make more genetically matched animals.

The birth of these clones also brings up ethical issues. Humans are in the primate family. With this birth, these scientists have broken a barrier and that means the technique could, in theory, be applied to humans. Context: RemoveDebris, a mission that will test different methods to clean up space junk is getting ready for launch.

RemoveDEBRIS is aimed at performing key Active Debris Removal (ADR) technology demonstrations (e.g capture, deorbiting) representative of an operational scenario during a low-cost mission using novel key technologies for ADR. The project is co-ordinated by the Surrey Space Centre at the University of Surrey, UK, and involves the collaboration of a number of mission partners.

The mission will comprise of a main satellite platform that once in orbit will deploy two CubeSats as artificial debris targets to demonstrate some of the technologies (net capture, harpoon capture, vision-based navigation, dragsail de-orbitation).

Scientists have warned that the growing problem of space debris is putting spacecraft and astronauts at risk. It is estimated that there are about half a million pieces of man-made rubbish orbiting the Earth, ranging from huge defunct satellites, to spent rocket boosters and nuts and bolts. Any collisions can cause a great deal of damage, and generate even more pieces of debris.

International space guidelines suggest that satellites should de-orbit themselves after 25 years – but it is difficult to ensure everyone plays by the rules.

India’s first floating market is now open in Kolkata’s Patuli area in West Bengal. Set up by the Kolkata Metropolitan Development Authority (KMDA), the market functions solely on boats at the lake in Patuli, where shopkeepers sell fruits, vegetables, fish among other produce.