Central government is likely to declare Medaram’s Sammakka-Sarakka/Saralamma Jatara a national festival this year. Once declared a national festival, Jatara can be considered for ‘intangible cultural heritage of humanity’ tag of United Nations Educational, Scientific and Cultural Organisation (UNESCO).

What is it? Sammakka-Sarakka Jatara held by forest dwelling Koya tribe of Telangana and surrounding States, is the biggest Tribal festival in Asia which is attended by one crore people on an average.

Why is it held? The event is held bi-annually to honour the twin goddesses Sammakka and her daughter Sarakka. Several communities in Telangana society support Jatara as it is also a mythical narrative of two tribal women leaders who fought against the Kakatiya rulers who tried to annex their land and forests. According to the myth it was Sammakka’s curse which caused gradual decline and death of Kakatiya rule.

Where is Medaram located? Medaram is a remote place in the Eturnagaram Wildlife Sanctuary, a part of Dandakaranya, the largest surviving forest belt in the Deccan. The three-day annual Flamingo Festival is being held at Pulicat lake.

Flamingo Festival is held every year to promote tourism in Pulicat and Nellapattu. Flamingo Festival is being organised for the past 12 years. Migratory birds from Siberia have been visiting this place for breeding and the colourful birds are a treat to the eye of bird watchers.

Usually around 80 different avian species migrate to Pulicat for breeding. They hunt in shallow waters of the lake and breed in Pulicat. Once the breeding season concludes, they fly away to their native land with their offspring in tow. The conducive atmosphere for this seasonal avian guests is being conserved at Nelapattu bird sanctuary.

About Nelapattu Bird Sanctuary: It is considered one of the biggest habitat for some hundreds of pelicans and other birds. Located about 20 km north of the Pulicat Lake on the Andhra Pradesh-Tamil Nadu border, the sanctuary is spread in about 459 hectares.

About Pulicat lake: It is the second largest brackish water lake or lagoon in India, after Chilika Lake. It straddles the border of Andhra Pradesh and Tamil Nadu states with over 96% of it in Andhra Pradesh. The lake encompasses the Pulicat Lake Bird Sanctuary. The barrier island of Sriharikota separates the lake from the Bay of Bengal and is home to the Satish Dhawan Space Centre. Two rivers which feed the lagoon are the Arani river at the southern tip and the Kalangi River from the northwest, in addition to some smaller streams. The Buckingham Canal, a navigation channel, is part of the lagoon on its western side.

Why is Maharashtra on the boil? On January 1, members of the Dalit community on their way to Bhima-Koregaon, a village near Pune, were attacked, allegedly by Hindutva forces. Following this, a State-wide bandh was called.

The Koregaon Ranstambh (victory pillar) is a memorial for British East India Company soldiers killed in a battle on January 1, 1818, in which a small group of infantrymen — about 500 of them Mahars (a Scheduled Caste community) — held off a numerically superior force from the army of Peshwa Bajirao II. The Mahars fought alongside the British, some accounts say, because the Peshwa had scorned their offer to join his army.

After Dr. Ambedkar visited the site on January 1, 1927, it became a place of pilgrimage for Dalits, an assertion of pride. In recent years, attendance has been in the lakhs, with Dalits coming from all over India. This year, the bicentenary, saw an especially large influx.

Sambhaji, Shivaji’s son and successor, was captured by the Mughals; according to legend, he was tortured and his mutilated corpse thrown into the Bhima river. Govind Mahar, a Dalit, gathered the dismembered parts of his body and performed the last rites; later, Mahars of the village erected a memorial to Sambhaji. Govind Mahar’s tomb stands near Sambhaji’s in Vadhu-Budruk village, near Bhima-Koregaon. 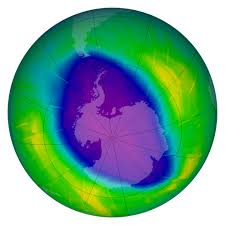 The hole in ozone layer has shrunk thanks to the ban of CFCs, Nasa has confirmed, after finding that chlorine levels are rapidly declining in the Earth’s stratosphere.

Last year, satellite images showed the hole had begun to close and could be completely healed by 2060. But it was not clear whether the closure was a direct result of the Montreal Protocol, which was signed by all countries of the world in 1985, phasing out chlorofluorocarbons (CFCs).

Now long-term satellite observations by Nasa have shown a 20% decrease in levels of chlorine in the Earth’s atmosphere since 2005, proving for the first time that the worldwide action is having a dramatic impact on the planet.

A layer of ozone envelops the Earth and keeps damaging ultraviolet, or UV, radiation from reaching living things on the planet’s surface. The ozone layer exists mainly in the stratosphere, a layer of the atmosphere that reaches from 10 to 50 kilometers (about 6 to 30 miles) above the Earth’s surface.

Chlorofluorocarbons, or CFCs, are compounds made up of combinations of the elements chlorine, fluorine and carbon; aerosols, refrigerants and foams contain CFCs. When these CFCs enter the air, they rise up into the atmosphere to meet up with and destroy ozone molecules. First used in 1928, CFCs have since become more common as various other CFC compounds were created. Some of the better-known CFCs are the Freon compounds, which were used as cooling ingredients in refrigerators and air conditioners. CFCs have lifetimes from 50 to 100 years.

How CFCs destroy the ozone?

Once in the atmosphere, CFCs drift slowly upward to the stratosphere, where they are broken up by ultraviolet radiation, releasing the chlorine that catalytically destroys ozone. The process is as follows:

CFCs have some interesting properties which can be fully exploited; therefore there are plenty of uses for these molecules. CFCs are not flammable; therefore they were used as propellants that would push other molecules out of the aerosol sprays. For the same reason CFCs were used to form foamed plastics. Also low flammability enabled people to use these molecules to dry clean hot electronic components of devices such as air conditioning. With antimicrobial resistance (AMR) emerging as a major concern in the health as well as allied sectors such as veterinary, dairy, fisheries and poultry, Kerala is all set to launch its strategic action plan for tackling AMR. The draft AMR action plan of the State is in the process of being finalised and implemented.

Need for an action plan:

The AMR surveillance data, from seven tertiary care centres in the state, have reported that resistance to Colistin, the last-mile antibiotic available to treat pan-drug resistant Klebsiella pneumoniae strains, is a reality in most government medical college hospitals in the State. besides, AMR surveillance in the State is currently restricted to the sample studies done in tertiary care hospitals but this hardly reflects the situation in the community.

The draft focuses on 5 strategies:

An antibiotic is a drug used to treat bacterial infections in both humans and animals. However, bacteria can change and ﬁnd ways to survive the effects of an antibiotic. This has resulted in antibiotics losing their effectiveness. The more we use antibiotics and the way that we use them can increase the chance that bacteria will become resistant to them. This is known as antimicrobial resistance.

What are the dangers of AMR?

AMR causes a reduction in the effectiveness of medicines, making infections and diseases difficult or impossible to treat. AMR is associated with increased mortality, prolonged illnesses in people and animals, production losses in agriculture, livestock and aquaculture. This threatens global health, livelihoods and food security. AMR also increases the cost of treatments and care. Context: Recent data put out by the Union Health Ministry’s Integrated Disease Surveillance Programme (IDSP) has indicated that food poisoning is one of the commonest outbreaks reported in 2017. This is apart from acute diarrhoeal disease (ADD).

The IDSP has interpreted that the incidence of ADD and food poisoning is high in places where food is cooked in bulk, such as canteens, hostels and wedding venues.

Food poisoning, also called food-borne illness, is caused by eating contaminated food. Infectious organisms including bacteria, viruses and parasites or their toxins are the most common causes.

What is it? The Integrated Disease Surveillance Program (IDSP) is a disease surveillance scheme under the Ministry of Health and Family Affairs in India, assisted by the World Bank.

Aim: The scheme aims to strengthen disease surveillance for infectious diseases to detect and respond to outbreaks quickly. The Project was undertaken to meet the World Health Organization Guidelines for South East Asian countries on disease surveillance to track the outbreak of diseases and its potential trans boundary threats.

Significance: A large amount of data on disease reports are collected in order to be able to identify the outbreak of a disease, identify its causes and take corresponding preventive and responsive measures. An early warning system has been put into place in order to take timely preventive steps.

Need: The International Health Regulations of 2005 lay down comprehensive guidelines on the role of an International Health Regulation (IHR) contact point in surveillance of disease outbreaks in the country. This information is to be shared during unexpected or unusual public health events. The IHR that came into force in 2007, places an obligation upon member states to report certain outbreak reports in order to track global disease trends through health surveillance. Mankidia, one of the 13 Particularly Vulnerable Tribal Groups (PVTG) in Odisha, have been denied habitat rights inside the Similipal Tiger Reserve (STR) under the historic Scheduled Tribes and Other Traditional Forest Dwellers (Recognition of Forest Rights) Act, 2006, as the State Forest Department has objected on grounds that tribals could be attacked by wild animals, especially tigers.

Definition of Habitat: “‘Habitat’ as defined under Section 2(h) of the FRA (Forest Rights Act) includes the area comprising the customary habitat and such other habitats in reserved forests and protected forests of primitive tribal groups and pre-agricultural communities and other forest dwelling Scheduled Tribes.

About Mankidia tribe: Mankidia is a marginalised group that critically depends on making rope with siali fibre that’s richly available in Similipal.

About ‘Particularly Vulnerable Tribal Groups (PVTGs)’: PVTGs are more vulnerable among the tribal groups. In 1975, the Government of India initiated to identify the most vulnerable tribal groups as a separate category called PVTGs and declared 52 such groups, while in 1993 an additional 23 groups were added to the category,making it a total of 75 PVTGs out of 705 Scheduled Tribes, spread over 17 states and one Union Territory(UT), in the country (2011 census). Among the 75 listed PVTG’s the highest number are found in Odisha (13), followed by Andhra Pradesh (12).

India’s second FTII to be set up in Arunachal:

Arunachal Pradesh would get its first Film and Television Institute, being set up by the Union Government as part of tapping the potential of the Northeastern region. This would be the second such one in the country.

The first Film and Television Institute of India (FTII) was set up in Pune, an autonomous institute operating under the Information and Broadcasting Ministry.