Context: UNICEF has released the 2017 edition of its annual flagship publication “The State of the World’s Children Report”. Themed “Children in a digital world”, the latest report provides country-level examples to give a sense of the kinds of barriers girls and women confront.

Digital gender divide is caused by a number of factors — social norms, education levels, lack of technical literacy and lack of confidence among them — but is often rooted in parents’ concern for the safety of their daughters. Many fear that allowing girls to use the internet will lead to liaisons with men, bringing shame on the family. For most girls, if they are allowed to use the internet, their every move is monitored by their parents or brothers.

In a society that is still largely patriarchal, for girls, traits like deference and obedience are often valued over intelligence and curiosity. In some households, technology is not seen as necessary or beneficial for girls and women.

Why bridging of digital gender gap is necessary?

If girls and women remain digitally illiterate, they risk becoming further marginalised in society and at home. Therefore, bridging gender gap is necessary. Besides, digital connection and literacy offer advantages in a knowledge-based society, improving children’s lives and their future earning potential.

Topic: Population and associated issues, poverty and developmental issues, urbanization, their problems and their remedies. Context: The Ministry of Drinking Water and Sanitation has launched the Ganga Gram Project under the Namami Gange Programme, for holistic sanitation development in villages on the banks of River Ganga. These villages will set the bench mark of cleanliness and integrated effort of development. These will be converted into Ganga Grams by 31st December 2018.

Ganga Gram vision is an integrated approach for holistic development of villages situated on the banks of River Ganga with active participation of the villagers. The objectives of Ganga Gram Project include solid and liquid waste management, renovation of ponds and water resources, water conservation projects, organic farming, horticulture, and promotion of medicinal plants.

The program would be implemented by the National Mission for Clean Ganga (NMCG), and its state counterpart organizations i.e., State Program Management Groups (SPMGs). In order to improve implementation, a three-tier mechanism has been proposed for project monitoring comprising of a) High level task force chaired by Cabinet Secretary assisted by NMCG at national level, b) State level committee chaired by Chief Secretary assisted by SPMG at state level and c) District level committee chaired by the District Magistrate.

The program emphasizes on improved coordination mechanisms between various Ministries/Agencies of Central and State governments. ‘Vahan’ is the name of the national vehicle registry, which intends to collate all the information available with road transport authorities for easy access by both citizens and regulators. Data available with over 90% of all road transport authorities including RTOs and district transport offices have been computerised so far. As a result, Vahan now contains about 21.68 crore vehicle records in its repository.

Vahan has been designed to capture all the information mandated by the Central Motor Vehicle Act 1988 as well as State Motor Vehicle Rules. It has been customised to suit the varied requirements of all States and Union Territories. This way, the system ensures access to such information from anywhere. Besides, centralisation of data through the creation of the State and National Registries under Vahan also helps address the needs of RTOs, police and motor insurers.

The Police Department will also have access to the registry. The information available online can help in resolving crimes such as theft of vehicles and usage of fake registration numbers. Traffic-check points can cross-check the validity of the documents such as licences presented by motorists through hand-held devices. Enforcement activities such as issue of challan and settlement of penalty amount can also be carried out through Vahan. Banks, which may have given out loans for vehicle purchases, will also have access to the National/State Registry to track the status of vehicles under lien.

With Vahan, multiple visits to the RTO, extensive paperwork, queues, middlemen and bribes, all of which are today a part of package if you own a vehicle, will be a thing of the past. Vahan helps carry out most of the RTO related transactions including payments, online. Other services such as transfer of ownership, change of address, issue and renewal of permits and fitness certificates are also available at the click of the mouse. The need for ‘No objection certificate’ for transfers will be eliminated since all RTOs will have access to the centralised data. Context: The Reserve Bank of India (RBI) has once again clarified that prompt correction action (PCA) is imposed to encourage banks to improve their financial health. The reiteration comes in the wake of rumours on social media that some of the banks that are under PCA could be closed down.

PCA norms allow the regulator to place certain restrictions such as halting branch expansion and stopping dividend payment. It can even cap a bank’s lending limit to one entity or sector. Other corrective action that can be imposed on banks include special audit, restructuring operations and activation of recovery plan. Banks’ promoters can be asked to bring in new management, too. The RBI can also supersede the bank’s board, under PCA.

When is PCA invoked?

The PCA is invoked when certain risk thresholds are breached. There are three risk thresholds which are based on certain levels of asset quality, profitability, capital and the like. The third such threshold, which is maximum tolerance limit, sets net NPA at over 12% and negative return on assets for four consecutive years.

What are the types of sanctions?

There are two type of restrictions, mandatory and discretionary. Restrictions on dividend, branch expansion, directors compensation, are mandatory while discretionary restrictions could include curbs on lending and deposit. In the cases of two banks where PCA was invoked after the revised guidelines were issued — IDBI Bank and UCO Bank — only mandatory restrictions were imposed. Both the banks breached risk threshold 2.

Banks are not allowed to re new or access costly deposits or take steps to increase their fee-based income. Banks will also have to launch a special drive to reduce the stock of NPAs and contain generation of fresh NPAs. They will also not be allowed to enter into new lines of business. RBI will also impose restrictions on the bank on borrowings from interbank market. Context: In a sign that India’s Free Trade Agreement (FTA) negotiations could slow further, the Ministry of External Affairs (MEA) has taken a strong stand that the country should restrain itself from concluding any such pact from which it would not gain in the medium term. The Ministry has called for observance of due restraint and not conclude trade arrangements which are not to India’s medium term advantage. A lot of India’s free trade agreements have not served as well as they could have.

The statement is significant coming ahead of the ASEAN-India commemorative summit to be held on January 25, where the issue of the long-delayed Regional Comprehensive Economic Partnership (RCEP) will likely take centre stage.

Though larger FTAs are important for getting preferential access to the markets, it is important to be cautious about the manner in which such arrangements work out in respect of India’s imports as well as on the country’s efforts to increase the share of manufacturing sector in the economy.

RCEP negotiations were formally launched in November 2012 at the ASEAN Summit in Cambodia. RCEP is viewed as an alternative to the TPP trade agreement, which includes the United States but excludes China.

Emphasis of RCEP is on trade in goods and the same enthusiasm is not shared for trade in services. The reluctance in giving market access for trade in services is a big challenge for India. While there is immense pressure on India in the RCEP negotiations to commit to opening up (90%) of its traded goods, what is troubling the government is the fact that other RCEP countries have so far been lukewarm to India’s demands for greater market access in services, particularly on easing norms on the movement of professionals and skilled workers across borders for short-term work.

India, which is defensive regarding opening up its goods sector, is currently virtually isolated in the RCEP talks. Also, existing huge goods trade deficit has led to questions on whether the pact is only helping ASEAN nations and not benefiting India. 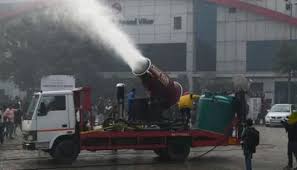 Context: With pollution levels in Delhi showing no signs of improvement and the city having smog as one of the main issues faced, the state government has introduced its latest weapon to combat the deadly smog. The Delhi government has tested ‘anti-smog guns in the capital to deal with the winter smog.

What is Anti-smog gun?

Anti-smog gun is a device that sprays atomised water into the atmosphere to reduce air pollution. Connected to a water tank and mounted on a vehicle, the device could be taken across the city to spray water to settle dust and other suspended particles.

The fog cannon, also dubbed as the ‘anti-smog cannon’, comprises a cylindrical drum with a tank to store water and a high-velocity exhaust fan. The water is pumped from the tank to the exhaust fan which blows out water in the form of micro droplets. The theory is that the sprayed water will cling on to the pollutants — particularly particulate matter PM2.5 and PM10 — and wash it down creating the effect of rain. The current trials will be used to find if the theory holds true.

This move is inspired by the Chinese water cannons that were used by the authorities there with some success. The idea is that it reduces air pollution by binding dust and other particulate matter, and bring them down to the ground level. This could be of use in an arid place like Delhi. The plan has been made by looking at the three major sources of pollution–transport, industry, and road dust and fugitive emissions.

What is it? It is a recently discovered frog species from Arunachal Pradesh’s Lower Subansiri district, one of the five discovered in India in the recent times and the 59th in the world.

Features: The species is sighted during the wet season, from April to September. They are not seen in the dry seasons. It is a genus of true frogs (Ranidae) from East Asia and surrounding regions including India. This new species inhabits moss and fern covered rocky stratum along hill streams in mixed wet tropical forest type.

Location: The new species was discovered from Talley Valley Wildlife Sanctuary (WLS). Talley is a plateau with dense forest of silver fir trees, pine clad plateau of beautiful grandeur, and a vast wasteland. The area has some of the most important endangered species including the clouded leopard.