Context: Moving to make instant triple talaq or talaq-e-biddat a criminal offence, the government is considering, among changes in existing laws, amendments to The Muslim Women (Protection of Rights on Divorce) Act, 1986. About the Muslim Women (Protection of Rights on Divorce) Act, 1986:

Commonly known as the Shah Bano Act, the 1986 law was enacted by the Rajiv Gandhi government under pressure from the Muslim clergy to overturn the Supreme Court ruling in the Shah Bano case. This law allowed, in line with Muslim personal law, maintenance to a divorced woman only during the period of iddat, or three menstrual cycles/three lunar months after divorce.

In August, the Supreme Court, in a landmark 3-2 verdict, “set aside” the centuries-old practice of instant triple talaq in which Muslim men divorce their wives by uttering talaq three times in quick succession. Three of the five judges on the Constitution Bench called the practice un-Islamic and “arbitrary” and disagreed with the view that triple talaq was an integral part of religious practice.

But the minority ruling of then Chief Justice J S Khehar and Justice S Abdul Nazeer underlined the primacy of Muslim personal law and said the practice enjoyed constitutional protection and was beyond the scope of judicial scrutiny. They were of the view that Parliament should consider an “appropriate” law to deal with the issue of talaq-e-biddat.

Once the law outlawing triple talaq is enacted, the Muslim clergy will have no role in cases of talaq-e-biddat and women can directly approach police for redressal.

The ‘preamble’ of the Shah Bano Act will have to be re-drafted since the existing law applies only after the divorce of a Muslim woman. Other than changes to the Shah Bano Act, the government is considering amendments to provisions of Section 125 Code of Criminal Procedure (order for maintenance of wives, children and parents) to provide further safeguards to Muslim women and their wards if they are abandoned via instant triple talaq.

Context: For having assured the broadcasters of Indian Premier League (IPL) that BCCI shall ‘not organise, sanction, recognise or support another professional domestic Indian T20 competition that is competitive to IPL, for a sustained period of 10 years”, Competitions Commission of India (CCI) has found the Indian cricket board to be in contravention of the provisions of Section 4(1) to be read with Section 4(2)(c) of the Competition Act, 2002.

Citing it as abuse of dominant position, for imposing restriction that denies access to the market for organisation of professional domestic cricket league / events, CCI has imposed a penalty of Rs 52.24 crore on BCCI for “anti-competitive conduct”.

The Competition Act, 2002 prohibits anti-competitive agreements, abuse of dominant position by enterprises and regulates combinations (acquisition, acquiring of control and Merger and acquisition), which causes or likely to cause an appreciable adverse effect on competition within India.

Composition: CCI consists of a Chairperson and 6 Members appointed by the Central Government.

Context: For providing additional funds for research and related infrastructure, Higher Education Funding Agency (HEFA), has started its operations. The HEFA Board recently approved projects for Rs. 2,066.73 Cr for six institutions – IITs Bombay, Delhi, Madras, Kharagpur, Kanpur and NIT Suratkal. These funds would be used to improve the research infrastructure in these institutions to further improve their standing at the global level. What is it? The Union Cabinet had approved HEFA in September 2016 as a Special Purpose Vehicle with a public sector bank (Canara Bank). It would be jointly funded by the promoter/bank and the MHRD with an authorised capital of ₹2,000 crore. The government equity would be ₹1,000 crore.

Functions: HEFA will leverage the equity to raise up to ₹20,000 crore for the funding of world-class infrastructure at the IITs, IIMs, the National Institutes of Technology (NITs) and such other institutions. The agency is also expected to mobilise Corporate Social Responsibility (CSR) funds from public sector units (PSUs) and corporates. These would be released as grants to eligible institutions for promoting research and innovation.

Context: Senior bureaucrat Badri Narain Sharma has been appointed as the chairman of the national anti-profiteering authority under the GST regime.

About the National Anti-profiteering Authority: Context: UK-based Indian-origin businessmen have committed to projects worth nearly Rs 500 crore associated with the Clean Ganga mission. Riverfront regeneration and development of ghats in the towns of Patna, Kanpur, Haridwar and Kolkata have been taken on by four leading industrialists from the UK.

The businessmen will take on the projects as part of their corporate social responsibility (CSR) agenda and work with the Indian government on finalising the plans for each of the cities.

The Union government approved “Namami Gange” Program in May 2015. It integrates the efforts to clean and protect the Ganga River in a comprehensive manner.

Among other things, the programme will focus on pollution abatement interventions namely Interception, diversion & treatment of wastewater flowing through the open drains through bio-remediation / appropriate in-situ treatment / use of innovative technologies. The waters of the Siang river, considered the lifeline of northern Arunachal Pradesh for centuries, has suddenly turned dark black triggering panic in the frontier state. The water from the river is no longer considered fit for consumption.

Siang originates in China and then enters India through Arunachal Pradesh, it is then joined by two other rivers–Dibang and Lohit–as it enters Assam where it is called the Brahmaputra.

In a strategic move that is likely to irk China, India and Singapore have signed a bilateral agreement that will allow Indian Navy ships logistical support, including refuelling, at Singapore’s Changi naval base located near the disputed South China Sea. 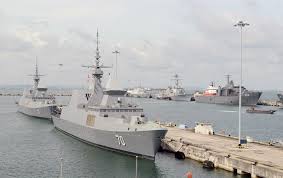 What does this mean for India?

This means that Indian Navy ships sailing through the disputed South China Sea or in the eastern waters of the Andaman Sea will be able to refuel, restock and, if needed, rearm at Singapore’s latest naval base before continuing their mission. This means the Indian Navy will be able to directly engage Singaporean authorities when they need to use their facilities unlike the present structure where a request has to be sourced from the Indian Navy to the government of Singapore through the Defence Ministry and then the External Affairs Ministry, a process that can take weeks if political clearances need to be obtained in Singapore.

The naval logistics agreement is the first for India with a country located east of Malacca. The nearest Indian base is in the Andaman and Nicobar Islands. The Changi base will therefore enhance the navy’s operational reach. The naval base also plays a prominent role in the protection of naval vessels, repair facilities, supplies, administration and logistics support.

Singapore is strategically situated on the major international sea routes – the Straits of Singapore and Malacca – and connects the Pacific and Indian Oceans making it economically important.

The country acts as the centre for international communications, transportations and trade to southeast Asia. It works with neighbouring littoral states for safety, stability, regional peace and navigational freedom.

Context: North Korea has launched its most powerful weapon yet- Called the Hwasong-15, after nearly two months of relative quiet.

What is the Hwasong-15? It is the ‘greatest ICBM’ that could be armed with a ‘super-large heavy nuclear warhead’ capable of striking the ‘whole mainland’ of the United States of America. Pyongyang claimed the missile reached a height of 4,475 km (2,780 miles) and traveled 950 km (590 miles) before it accurately hitting a sea target.

Karnataka has become the first state in the country where administration, both civil and police, is headed by women. IAS officer K Ratna Prabha is the chief secretary and IPS officer Neelamani N Raju is the director general and inspector general of police (DG&IGP).

Context: India has donated 500 metric tonnes of rice to the Kingdom of Lesotho, in Southern Africa, which is facing acute food shortage due to famine.

Location: Lesotho is an enclaved, landlocked country in southern Africa completely surrounded by South Africa. Resources are scarce – a consequence of the harsh environment of the highland plateau and limited agricultural space in the lowlands.