What is it? The National Skill Development Corporation (NSDC) is a one-of-its-kind, Public Private Partnership (PPP) model in India, under the Ministry of Skill Development & Entrepreneurship (MSDE). A not-for-profit company set up by the Ministry of Finance, under Section 25 of the Companies Act, it has an equity base of Rs.10 crore, of which the Government of India holds for 49%, while the private sector has the balance 51%.

It aims to promote skill development by catalyzing creation of large, quality and for-profit vocational institutions.

Functions: NSDC provides funding to build scalable and profitable vocational training initiatives. Its mandate is also to enable support system which focuses on quality assurance, information systems and train the trainer academies either directly or through partnerships. NSDC acts as a catalyst in skill development by providing funding to enterprises, companies and organisations that provide skill training. It will also develop appropriate models to enhance, support and coordinate private sector initiatives. 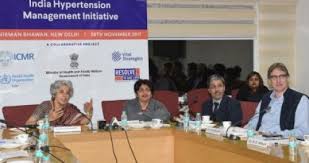 The India Hypertension Management Initiative (IHMI) is a collaborative project of Indian Council of Medical Research (ICMR), Ministry of Health and Family Welfare (MoHFW), State Governments, World Health Organization (WHO), and Resolve to Save Lives initiative of Vital Strategies.

The IHMI aims to reduce disability and death related to cardiovascular disease (CVD), the leading cause of death in India, by improving the control of high blood pressure (hypertension), reducing salt consumption and eliminating artificial trans-fats, leading risk factors for CVD.

The IHMI is focused on five essential components of scalable treatment of hypertension. It will support the adoption of standardized simplified treatment plans for managing high blood pressure, ensure the regular and uninterrupted supply of quality-assured medications, task sharing so health workers who are accessible to patients can distribute medications already prescribed by the medical officer, and patient-centered services that reduce the barriers to treatment adherence.

Meeting of Asia and Pacific Decade for Persons with Disabilities

The High Level Inter-Governmental Mid-Point review meeting of Asia and Pacific Decade for Persons with Disabilities, 2013-2022 is being held in Beijing. A number of countries in the Asia-Pacific region are participating and will finalise a Declaration which will address the gaps and challenges in empowerment and inclusion of persons with disabilities.

The main objective of the meeting is to review the progress made by the member States during the Decade at the mid-point in 2017 with regard to Incheon Strategy ‘to make the right real’ for persons with disabilities in Asia and Pacific.

Another objective of the meeting is to discuss the future policy action for building disabilities-inclusive societies in the region, bearing in mind the synergies between the Incheon Strategy and 2030 Agenda for Sustainable Development.

What is Incheon strategy?

The Incheon Strategy to “Make the Right Real” for Persons with Disabilities in Asia and the Pacific provides the Asian and Pacific region, and the world, with the first set of regionally agreed disability-inclusive development goals.

The Incheon Strategy goals cover a range of development areas from poverty reduction and employment to political participation, accessibility, social protection, education, gender equality, disaster risk reduction, data collection, CRPD ratification and international cooperation. To ensure that the 10 goals are successfully met, the Strategy identifies 27 targets as well as 62 related indicators for monitoring and evaluating the implementation of the 10 goals. These targets and indicators are essential for developing practical implementation strategies, ensuring success and identifying areas where significant challenges remain.

The ESCAP secretariat is mandated to report every three years until the end of the Decade in 2022, on progress in the implementation of the Ministerial Declaration and the Incheon Strategy. Why Chabahar port is crucial for India?

The inauguration of the port will effectively pave the way for India to carry forward the next phase of construction and development of two berths for its use, particularly for trade with Afghanistan. Next, the government, which has committed $500 million to the port project, will develop a free-trade area around the port, and finally will complete the loop with a $1.6-billion railway line to Zahedan.

Georgia’s Permanent Representative to the International Maritime Organization (IMO) has been elected as the Vice President of the IMO Assembly. Tamar Beruchashvili, who also is Georgia’s Ambassador to the United Kingdom, was elected to the role at the recently held Assembly’s 30th session.

The International Maritime Organization – is the United Nations specialized agency with responsibility for the safety and security of shipping and the prevention of marine pollution by ships.

The IMO Council acts as the IMO’s Governing Body. It has a crucial role to play in deciding various matters in relation to the global shipping industry, including its work programme strategy and budget.

The 8th edition of the Global Entrepreneurship summit (GES) was recently held in Hyderabad. It was hosted by NITI Aayog in partnership with US government. The summit was attended by 1,500 entrepreneurs from 170 countries.

“Women First, Prosperity for All”.

The summit organised annually since 2010, is the preeminent annual entrepreneurship gathering that convenes over one thousand emerging entrepreneurs, investors, and supporters from around the world.

This year marks the first GES held in South Asia, and the event underscores the broad and enduring partnership with India. The summit will focus on four key industry sectors: Energy and Infrastructure, Healthcare and Life Sciences, Financial Technology and Digital Economy, and Media and Entertainment.

The Pradhan Mantri Sahaj Bijli Har Ghar Yojana (SAUBHAGYA) has been launched in Manipur. A total of approximately 1.75 lakh households (1.62 lakh rural households and 0.13 lakh urban households) of Manipur are proposed to be included under the Scheme. The scheme called Pradhan Mantri Sahaj Bijli Har Ghar Yojana –“Saubhagya” was launched in September 2017 to ensure electrification of all willing households in the country in rural as well as urban areas. The Telecom Regulatory Authority of India (TRAI) has come out in strong support of Net neutrality in a series of recommendations following a long process of consultations on the issue.

Highlights of the recommendations made by the TRAI:

So, what is Net neutrality?

Net neutrality is an interpretive concept. The term was coined by Tim Wu — an American lawyer and presently a professor at the Columbia University. He views the notion of Net neutrality as signifying an Internet that does not favour any one application over another. In other words, the idea is to ensure that Internet service providers do not discriminate content by either charging a fee for acting as its carrier or by incorporating any technical qualifications.

Proponents of the principle of net neutrality hold that all traffic on the Internet should be treated equally or in other words, service providers such as Airtel should allow access to all content without favouring any particular product or website.