Every year the State of Manipur celebrates the “Manipur Sangai Festival” from 21st to 30th November. About the Sangai festival:

What is it? Sangai Festival is an annual cultural extravaganza in Manipur. The festival is labelled as the grandest festival of the State today and helps promote Manipur as a world class tourism destination. Every edition of the festival showcases the tourism potential of the state in the field of Arts & Culture, Handloom, Handicrafts, Indigenous Sports, Cuisine, Music and Adventure sports of the state etc.

Background: The ‘Festival’ is named after the State animal, Sangai, the brow-antlered deer found only in Manipur. It started in the year 2010 and has grown over the years into a big platform for Manipur to showcase its rich tradition and culture to the world.

Focus areas: The festival will reflect the State’s proud cultural heritage and the love for art which is inherent amongst various tribes inhabiting the State of Manipur. The State’s classical dance form, ‘Ras Leela’ is quite famous all over the world for its distinctiveness from any other dance forms in India. The Ras Leela will form an important part of the dance performances at the Manipur Sangai Festival 2017 besides the various other folk dance performances like the Kabui Naga dance, Bamboo dance, Maibi dance, Lai Haraoba dance, Khamba Thoibi dance etc. which will be showcased at the festival.

Indigenous sports will also be a major highlight of the State’s biggest tourism festival this year. Manipur’s famous martial arts- Thang Ta (a combination Spear & Sword skills), Yubi-Lakpi (a game played with greased coconut like rugby), Mukna Kangjei (a game that combines hockey and wrestling), and Sagol Kangjei- Modern Polo (believed to have evolved in Manipur) will all form part of the festival.

Context: A National Consultation of Swachh Iconic Places (SIP)was recently held at New Delhi. Representatives from 20 Iconic Sites including central and State officials, representatives of iconic places and Corporate and development partners including World Bank took part in the consultations.

What is it? Swachh Iconic Places (SIP) is an initiative of Ministry of Drinking Water and Sanitation under Swachh Bharat Mission. Initiated as a project to implement Prime Minister’s vision to take iconic places and their surroundings to higher standards of Swachhata, so that all visitors benefit and also take away home the message of cleanliness, Swachh Iconic Places is now in its second phase.

Implementation of the project: SIP is a truly collaborative project with three other central Ministries: Urban Development, Culture, Tourism; all levels in the concerned States and more importantly, Public Sector and Private companies as partners.

Context: Manipur is hosting the first ever North East Development Summit (NEDS) 2017 in Imphal from November 21. About the North East Development Summit:

What is it for? The summit seeks to boost trade and investment in the underdeveloped region. Various international finance agencies will lay down their plan for development in the region.

Aim: It is aimed at “building confidence” and altering the “perception” among visiting delegates and investors.

Organizers: India Foundation, a Delhi-based think tank, is organising the summit in collaboration with the Centre and Manipur government. With rising number of cases under the Insolvency and Bankruptcy Code, the government has set up a 14-member panel to identify and suggest ways to address issues faced in implementation of the law. The move also comes against the backdrop of concerns in certain quarters about various aspects of the law including the possibility of promoters wresting back control of a company under insolvency process.

The Insolvency and Bankruptcy Code, 2016:

It is considered as the biggest economic reform next only to GST. It offers a market determined, time bound mechanism for orderly resolution of insolvency, wherever possible, and orderly exit, wherever required. 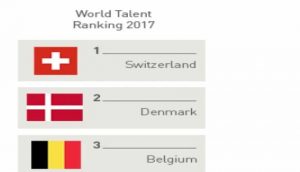 World Talent Ranking covers 63 countries and assesses the methods countries use to attract and retain the talent their businesses need to thrive.

Assessment: The IMD World Talent Ranking is based on countries’ performance in three main categories – investment and development, appeal and readiness. The three categories assess how countries perform in a wide range of areas. These include education, apprenticeships, workplace training, language skills, cost of living, quality of life, remuneration and tax rates.

As per the IMD rankings, India has not been successful in terms of investment in education as a percentage of GDP. According to the rank list by IMD, it ranked among the bottom five countries in the world in this aspect. Therefore, India needs to emphasise the education system as a key to prosperity. It also needs to prevent brain drain by providing better opportunities to local talent.

Context: The Shanghai-based BRICS New Development Bank (NDB) has approved two infrastructure and sustainable development projects in India and Russia with loans of $400 million. The loans will be used to rehabilitate the Indira Gandhi canal system in India and to build a toll transport corridor connecting Ufa city centre to the M-5 federal highway in Russia. It is a multilateral development bank operated by the BRICS states (Brazil, Russia, India, China and South Africa). It is seen as an alternative to the existing US-dominated World Bank and International Monetary Fund.

Context: At the upcoming WTO’s Ministerial Conference, India has decided not to agree to severe restrictions on its right to give price subsidies to farmers through the Minimum Support Price (MSP) to procure grains from them for food security purposes. Food security and protection of low-income and resource-poor farmers are top priority items for India at the WTO meet.

Currently, an interim mechanism called the ‘Peace Clause’ is in place, as per which WTO members had agreed not to challenge developing nations at the WTO Dispute Settlement Mechanism if they breached the cap of the product-specific domestic support (which is 10% of the value of production). The ‘Peace Clause’ is available to developing nations, including India, till a permanent solution is found to public stockholding for food security purposes.

Why is it difficult to invoke peace clause?

The ‘Peace Clause’ is difficult to invoke even in its current form because prior to using it, the country concerned will have to first admit that it ‘is breaching’ or ‘is about to breach’ the ceiling entitlement to give product-specific domestic support. Also, the ‘Peace Clause’ can be used only for public stockholding programmes that have been in existence on the date at which it was agreed upon at the Bali Ministerial Conference in December 2013, and not for new programmes on public stockholding for food security purposes.

The prospects of an agreement on a permanent solution are not that bright due to three roadblocks.

A world class Center of Excellence in Maritime and Ship Building (CEMS) is being set up by Ministry of Shipping in collaboration with Siemens and Indian Register of Shipping (IRS) under the Ministry’s flagship Sagarmala Programme. CEMS will have campuses at Vishakhapatnam and Mumbai. CEMS will provide industry-relevant skill development, equip students with employable engineering and technical skills in the port and maritime sector and contribute to the Government of India’s ambitious Sagarmala programme. CEMS is being set up to meet the domestic skill requirement in ship design, manufacturing, operating and maintenance, repair and overhaul (MRO).

This initiative also adds to the Make in India and Skill India efforts in the maritime sector. CEMS will provide skilled manpower to make vessels for inland waterways, ships, fishing boats and other ancillary manufacturing sectors.

The Sagarmala project seeks to develop a string of ports around India’s coast. The objective of this initiative is to promote “Port-led development” along India’s 7500 km long coastline.

It aims to develop access to new development regions with intermodal solutions and promotion of the optimum modal split, enhanced connectivity with main economic centres and beyond through expansion of rail, inland water, coastal and road services.

Nodal ministry: The Union Ministry of Shipping has been appointed as the nodal ministry for this initiative.

Context: 1st World Conference on Access to Medical Products and International Laws for Trade and Health in the Context of the 2030 Agenda for Sustainable Development is being held in New Delhi, India.

The Conference is being organized by the Ministry of Health & Family Welfare with the support of WHO Country Office for India and in partnership with Indian Society of International Law.

The objective of the Conference is to exchange knowledge and expand understanding on contemporary issues in international trade laws and research and innovation for access to medical products to achieve SDG 2030 agenda.