Hunar Haats are organised by Ministry of Minority Affairs under USTTAD (Upgrading the Skills & Training in Traditional Arts/Crafts for Development) scheme. The USTTAD scheme aims at preserving & promoting the rich heritage of the traditional arts & crafts of the Minority communities.  This is one of the flagship programmes of the Ministry. On the occasion of Children’s Day, the winners of ‘Drawing and Painting Competition on Accessible India Campaign’ were awarded at a felicitation event organised by Department of Empowerment of Persons with Disabilities (Divyangjan) under M/o Social Justice and Empowerment.

Accessible India Campaign (AIC) is the nationwide flagship campaign of the Department of Empowerment of Persons with Disabilities (DEPwD), Ministry of Social Justice and Empowerment.

The aim of the Campaign is to make a barrier free and conducive environment for Divyangjans all over the country. The campaign has the vision to build an inclusive society in which equal opportunities are provided for the growth and development of Persons with Disabilities (PwDs) so that they can lead productive, safe and dignified lives.

For creating universal accessibility for Persons with Disabilities, the campaign has been divided into three verticals: Built Environment; Transport and Information & Communication Technology (ICT) ecosystem.

(i) Completing accessibility audit of at least 25-50 most important government buildings in 50 cities and making them fully accessible by the end of this year;

(ii) Making 50% of all the government buildings of NCT and all the State capitals fully accessible by December 2018;

(iii) Completing accessibility audit of 50% of government buildings and making them fullyaccessible in 10 most important cities/towns of States not covered in targets (i) and (ii) by December 2019.

The much-delayed and hotly debated Karnataka Prevention and Eradication of Inhuman Evil Practices and Black Magic Bill, 2017, popularly known as the ‘Anti-Superstition Bill’, was recently tabled in the Legislative Assembly. The Bill, if cleared by the State legislature, is expected to put an end to various inhuman practices. The bill bans the following:

What is not banned?

Context: A Curtain Raiser Event for the Founding Ceremony of the International Solar Alliance (ISA) was recently held at Bonn, Germany.

About the International Solar Alliance (ISA):

The ISA is a treaty-based alliance of 121 prospective solar-rich Member Nations situated fully or partially between the Tropics, and aims at accelerating development and deployment of solar energy globally.

When it was launched?

The ISA was jointly launched on 30 November 2015 by Prime Minister of India, Shri Narendra Modi, and then-President of France, H.E. François Hollande, on the side lines of the UNFCCC Conference of Parties 21 (CoP21) at Paris, France.

ISA will become a treaty-based international intergovernmental organisation on 6 December 2017. 44 countries have already signed the ISA treaty, and many more are set to join. The theme of the summit is “Deepening Economic Integration for Inclusive and Sustainable Development in South Asia”.

Started in 2008, South Asia Economic Summit is like Davos- World Economic Forum event in South Asia. It is a regional platform for discussing and analyzing economic and development issues and challenges faced by South Asian countries and advancing the cause of regional integration and cooperation.

It brings together stakeholders from the government, private sector, research, academics and civil society to generate innovative and actionable ideas for consideration by the region’s policymakers and SAARC. The conference theme is “Building Trust in the Digital Economy”.

Membership: Any CSIRT from Asia Pacific Region, who is interested to furthering the objectives of APCERT, will be allowed to join as APCERT members after meeting all member accreditation requirements.

Full members: Full Members are CSIRTs/CERTs in the Asia Pacific region, who have the right to vote on APCERT issues, as well as to stand for election to the APCERT Steering Committee. All Founding Members are Full Members.

The purpose of CERT-In is to respond to computer security incidents, report on vulnerabilities and promote effective IT security practices throughout the country. According to the provisions of the Information Technology Amendment Act 2008, CERT-In is responsible for overseeing administration of the Act.

Context: National Power Portal(NPP)- a Centralized Platform for Collation and Dissemination of Indian Power Sector Information, has been launched by the government. The sculptures from Mamallapuram were known to be carved in stone with characteristics of intricate designing chiselled finely, keeping with the spirit of the surrounding Pallava art and architecture. The description includes cave architecture, rock architecture, structural temples, open sculptures, relief sculptures and painting/portrait sculptures. 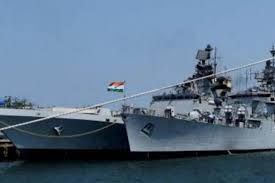 What is it? It is a joint security exercise organized jointly by the governments of Odisha and neighbouring West Bengal.

Aim: It aims to further tighten the existing coastal security mechanism along the 630 km long coastline.

What it does? “Sagar Kavach security exercise is a realistic drill to check the efficacy of the security parameters and preparedness of various security forces like the Indian Navy, Marine police force, Indian Coast Guard (ICG), Forest Department, Fisheries and district administration.