The Union Cabinet has accorded its approval for continuation and restructuring of National Rural Drinking Water Programme (NRDWP) to make it outcome-based, competitive and better monitored with increased focus on sustainability (functionality) of schemes to ensure good quality service delivery to the rural population. The programme will cover all the Rural Population across the country.

The NRDWP was started in 2009, with a major emphasis on ensuring sustainability (source) of water availability in terms of potability, adequacy, convenience, affordability and equity. NRDWP is a Centrally Sponsored Scheme with 50: 50 fund sharing between the Centre and the States.

The aim and objective of National Rural Drinking Water Programme (NRDWP) is to provide every rural person with adequate safe water for drinking, cooking and other basic domestic needs on a sustainable basis, with a minimum water quality standard, which should be conveniently accessible at all times and in all situations. Achieving this aim and objective is a continuous process.

The Union Cabinet has approved creation of National Testing Agency (NTA) as a Society registered under the Indian Societies Registration Act, 1860, and as an autonomous and self-sustained premier testing organization to conduct entrance examinations for higher educational institutions. In view of the need to have a specialized body in India like the most advanced countries, the Finance Minister in the Budget speech of 2017-18 had announced setting up of a National Testing Agency (NTA) as an autonomous and self-sustained premier testing organization to conduct all entrance examinations for higher educational institutions.

NTA will be given a one-time grant of Rs.25 crore from the Government of India to start its operation in the first year. Thereafter, it will be financially self-sustainable.

Establishment of NTA will benefit about 40 lakh students appearing in various entrance examinations. It will relieve CBSE, AICTE and other agencies from responsibility of conducting these entrance examinations, and also bring in high reliability, standardized difficulty level for assessing the aptitude, intelligence and problem solving abilities of the students.

Pension Fund Regulatory and Development Authority (PFRDA) has planned to conduct State specific Atal Pension Yojana (APY) mobilization Campaigns under the title “People First”. The People First campaign will be a series of campaigns conducted at various states across the country to increase APY outreach. 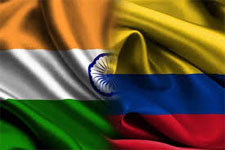 Significance of the JID:

The JID would impart clarity to the interpretation of the existing Agreement as it includes interpretative notes to be jointly adopted for many clauses, including, the definition of investor, definition of investment, Fair and Equitable Treatment (FET), National Treatment (NT) and Most Favoured Nation (MFN) treatment, expropriation, Investor – State Dispute Settlement provision and Denial of Benefits.

Joint Interpretative Declarations/Statements in general play an important supplementary role in strengthening the investment treaty regime. With increasing Bilateral Investment Treaty (BIT) disputes, issuance of such statements is likely to have strong persuasive value before arbitration tribunals. Such pro-active approach by partners can foster a more predictable and coherent reading of treaty terms by arbitration tribunals.

Colombia is a sovereign state largely situated in the northwest of South America, with territories in Central America. Colombia shares a border to the northwest with Panama, to the east with Venezuela and Brazil and to the south with Ecuador and Peru. Ecologically, it is one of the world’s 17 megadiverse countries, and the most densely biodiverse of these per square kilometer.

11 Trade ministers reach deal on Pacific trade without US

In a major breakthrough, trade ministers from 11 Pacific Rim countries have reached a deal to proceed with the free-trade Trans-Pacific Partnership deal that was in doubt after President Donald Trump abandoned it. The TPP member countries are trying to find a way forward without the U.S. In January, Mr. Trump pulled out of the deal that was championed by his predecessor Barack Obama. Leaders of the 11 countries remaining in the TPP had been due to meet and endorse a deal worked out in last-minute talks overnight.

Initially, twelve countries that border the Pacific Ocean signed up to the TPP in February 2016, representing roughly 40% of the world’s economic output. The pact aimed to deepen economic ties between these nations, slashing tariffs and fostering trade to boost growth. Members had also hoped to foster a closer relationship on economic policies and regulation.

The agreement was designed so that it could eventually create a new single market, something like that of the EU.

The Union Cabinet has given its approval for entering into an Agreement between India and the Hong Kong Special Administrative Region (HKSAR) of China for the Avoidance of Double Taxation and the Prevention of Fiscal Evasion with respect to taxes on income.

Significance of this agreement:

The Agreement will stimulate flow of investment, technology and personnel from India to HKSAR & vice versa, prevent double taxation and provide for exchange of information between the two Contracting Parties. It will improve transparency in tax matters and will help curb tax evasion and tax avoidance. A DTAA is a tax treaty signed between two or more countries. Its key objective is that tax-payers in these countries can avoid being taxed twice for the same income. A DTAA applies in cases where a tax-payer resides in one country and earns income in another. India has DTAAs with more than eighty countries, of which comprehensive agreements include those with Australia, Canada, Germany, Mauritius, Singapore, UAE, the UK and US.

DTAAs are intended to make a country an attractive investment destination by providing relief on dual taxation. Such relief is provided by exempting income earned abroad from tax in the resident country or providing credit to the extent taxes have already been paid abroad. DTAAs also provide for concessional rates of tax in some cases.

Legal provisions in this regard:

In so far as India is concerned, the Central Government is authorized under Section 90 of the Income Tax Act, 1961 to enter into an Agreement with a foreign country or specified territory for avoidance of double taxation of income, for exchange of information for the prevention of evasion or avoidance of income-tax chargeable under the Income-tax Act, 1961.

Hong Kong is an autonomous territory in China. It is the world’s fourth most densely populated country or territory. Under the principle of “one country, two systems”, Hong Kong maintains a separate political and economic system from China. Except in military defence and foreign affairs, Hong Kong maintains its independent executive, legislative and judiciary powers. The Ministry of New and Renewable Energy is implementing the project. It aims to minimize dependence on diesel in the Ladakh region and meet power requirement through local renewable sources.

Such projects would be able to replace use of diesel to a great extent, at least for about 8 months in a year and reduce green house emissions in the region.

Facebook has partnered with the National Disaster Management Authority (NDMA) and a non-profit body, SEEDS in India, to offer tools to these agencies to help them respond more effectively to natural disasters. How will this help in disaster management?

The intention of introducing these initiatives is to help improve response efforts to natural disasters in India. It is because during and after these crises, response organisations need accurate information to help communities response, recover and rebuild. Traditional communication channels are often offline and it can take significant time and resources to understand where help is desperately needed. In case there is an area which has a high concentration of Facebook users that suddenly goes offline, even that data insight can be used to rush services to the area.

Disaster Maps was introduced globally in June and uses aggregated location information that users have chosen to share with Facebook. These tools have been deployed in Peru and the US.