Spain is planning to suspend Catalonia’s autonomy, as the region’s leader threatens to declare independence. The Spain government would soon meet to activate Article 155 of the constitution, allowing it to take over running of the region.

Article 155 of the constitution, which cemented democratic rule three years after the death of dictator General Francisco Franco in 1975, allows Madrid to impose direct rule in a crisis but it has never been invoked. Catalonia is an autonomous community of Spain in the north-east end of the Iberian Peninsula, designated as a nationality by its Statute of Autonomy. It has four provinces: Barcelona, Girona, Lleida, and Tarragona. The capital and largest city is Barcelona, which is the second most populated city in Spain.

What is the history of the secession movement?

Catalonia was historically an autonomous region of the Iberian peninsula, which encompasses Spain and Portugal. However, it was never a disparate part of the region despite having its own language, laws, and customs. The marriage of Petronilia, the Queen of Aragon, and Ramon Berebguer IV, Count of Barcelona in 1150, led to the formation of a dynasty. All regions of the peninsula spanning Aragon and Catalonia were brought under unified rule which lasted until the reign of King Philip V.

How would a secession affect the Spanish economy?

The Catalan region has long been the industrial heartland of Spain, with textile and shipbuilding, and more recently, finance, services, and technology. Barcelona has a thriving start-up culture, and plays host to the annual Mobile World Congress, where the bleeding edge of technology is on display.

India has topped the list of countries with pollution-related deaths in 2015, with 2.51 million people dying prematurely in the country that year due to diseases linked to air, water and other forms of pollution, according to a new study published in the reputed medical journal, The Lancet. The Lancet study concluded that pollution is now the largest environmental cause of disease and death in the world today — three times more those from HIV-AIDS, TB and malaria put together.

It is “time to wake up” and start finding innovative solutions. For this, the government will need to take a lead role and formulate strategies on an urgent basis. Otherwise, the growing economy in the country will be a curse to the common man because this is coming at the cost of suffering and death.

George Saunders has won the Man Booker prize for his novel Lincoln in the Bardo – becoming the second US author to take home the £50,000 fiction award. 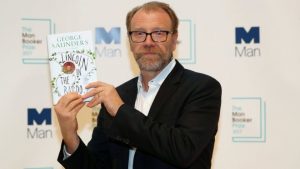 The leading literary award in English, The Man Booker Prize was launched in 1969. It aims to promote the ‘finest in fiction’ and is awarded each year to the book adjudged as the best novel of the year written in English and published in the United Kingdom.