Campaign on ‘women for women’: #IamThatWoman

In an attempt to end Gender bias in women against women, the Ministry of Women and Child Development is undertaking an online campaign #IamThatWoman. Significance of this campaign:

When a woman has the support of her womanhood, she can be unstoppable. Through this campaign, the government aims to shed light on the enormous contributions made by women for women.

Every toilet constructed across the country under the Swachh Bharat Mission could now be called ‘Izzat Ghar’, or something equivalent in a local language that means house of dignity, following a directive from the Centre to the states. Swachh Bharat Mission was officially launched on 2 October 2014 and is India’s biggest ever cleanliness drive. It aims to eliminate open defecation by 2019. The goal also includes the elimination of open defecation, conversion of insanitary toilets to pour flush toilets, eradicating of manual scavenging and Municipal Solid Waste Management (MSWM).

The components of the programme are:

The Indian Institute of Science (IISc) in Bangalore and IIT Bombay are among the world’s top 200 institutions for engineering and computer science, the Times Higher Education subject-wise rankings have found. TIMES rankings scored 500 institutions worldwide, as opposed to 100 last year, on performance parameters such as industry income, international outlook, teaching and research. It highlights the educational institutions that are leading in electrical, mechanical, civil, chemical and general engineering courses.

Joining the debate on job reservations, Niti Aayog vice chairman Rajiv Kumar has said he is against extending the policy to the private sector, while admitting that more efforts are needed to generate more employment. 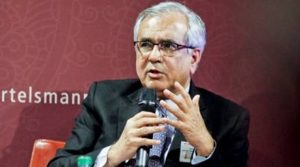 60 lakh young people join the labour force every year. Many of them do not find any job.  Many people used to find some kinds of jobs in informal sector but that has reached a point of saturation. However, the government is able to provide employment to 10 -12 lakh youths. Therefore, several political leaders are advocating job reservation for SC/ST in private sector.

However, several industry associations have maintained over the years that introducing reservations could create hurdles in growth due to dearth in skilled labour and hurt chances of attracting investments in the state.

Why reservation in private sector is not a good move?

Quotas are no silver bullet that deliver social justice. The only way to ensure that is to level the playing field, through better education and training, and a constant vigil that would ensure action against those who undermine the equality for all promised by the Constitution.

World Sawfish day was observed on October 17th. The sawfish have been sighted off the Indian coast less than 10 times in over a decade and they appear to be more threatened than tigers and elephants, as per the scientists.