Directorate General of Quality Assurance (DGQA) has completed 60 years of its existence.

The Directorate General of Quality Assurance (DGQA) is under Department Of Defence Production, Ministry of Defence. This organisation is more than hundred years old and provides Quality Assurance (QA) cover for the entire range of Arms, Ammunitions, Equipments and Stores supplied to Armed Forces.

VVPAT to be used in Gujarat polls 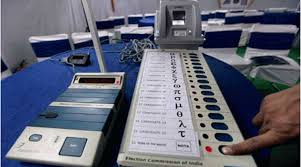 The Election Commission of India will use Voter Verifiable Paper Audit Trail (VVPAT) gadgets with Electronic Voting Machines (EVM) in all 50,128 voting booths in Gujarat, which goes to the Assembly polls at the end of this year.

This is the first time an entire assembly poll will be conducted using EVMs equipped with VVPAT.

In 2013, conduct of Election Rules, 1961 was amended to facilitate the introduction of VVPAT units. For the first time, VVPAT with EVMs was used for the Noksen Assembly seat in Tuensang district of Nagaland.

In the case of Subramanian Swamy vs Election Commission of India (ECI), the Supreme Court held that VVPAT is “indispensable for free and fair elections” and directed the ECI to equip EVMs with VVPAT systems. The apex court had directed the EC to introduce EVMs in a phased manner for the next General Elections in 2014, saying it would ensure free and fair polls. SC also directed the Centre to provide financial assistance for introducing VVPAT system.

India and Afghanistan have exchanged a memorandum of understanding, which will see Afghan police forces trained in India for the first time.

Aim of the MoU: The MoU on Technical Cooperation on Police Training and Development will see India expand its capacity building of Afghan troops to include policemen and security forces, who are facing the brunt of Taliban attacks in the country, under a UN Development Programme project.

India has earlier trained Afghan national army officers and the MoU for training Afghan police is expected to further deepen security cooperation between the two countries. According to the government, the MoU will help in capacity building of Afghanistan National Police and improving the security apparatus in the region.

India has been helping trouble-torn Afghanistan in capacity building besides extending assistance in social, medical and educational fields.

ADB plans to raise lending up to $4 billion to India

The Asian Development Bank (ADB) has decided to raise its annual lending to India to a maximum of $4 billion to support the country to accelerate inclusive economic transformation toward upper middle-income status, as laid out in a new ADB country partnership strategy (CPS) for 2018-2022 endorsed recently.

Currently, it has 67 members – of which 48 are from within Asia and the Pacific and 19 outside.

ADB was modelled closely on the World Bank, and has a similar weighted voting system where votes are distributed in proportion with member’s capital subscriptions. The World Maritime Day was formally celebrated by the International Maritime Organisation (IMO) on 28 September 2017.

Theme: “Connecting Ships, Ports and People” is the theme of World Maritime Day this year. this theme was chosen by the IMO to provide an opportunity to focus on the many diverse sectors and people involved in the shipping and logistics areas.

The IMO is the United Nations specialised agency with responsibility for the safety and security of shipping and the prevention of marine pollution by ships. NDMA, as the apex body, is mandated to lay down the policies, plans and guidelines for Disaster Management to ensure timely and effective response to disasters. Towards this, it has the following responsibilities:

A fourth gravitational wave has been detected — this time with help from Italy-based equipment — after two black holes collided, sending ripples through the fabric of space and time.

Gravitational waves were predicted by Albert Einstein a century ago as part of his theory of general relativity, but the first hard evidence of their existence came only in 2015, when two U.S. detectors found the first such signal.

What are gravitational waves?

In simple terms, gravitational waves can be explained as ripples in the fabric of space-time which can only be caused by massive astronomical events such as neutron stars or black holes orbiting each other so that these waves would finally radiate from them.

These gravitational waves, if detected, will carry signatures of their origin, explaining much about the nature of gravity and the origin of the universe. They had remained elusive till their detection was first announced last year.