It is an indigenous irrigation technology. This system has evolved from an understanding of the particular agro-climatic conditions of the South Bihar plains of India.

A model of water conservation adopted successfully by the authorities in Nalanda district of south central Bihar, has been selected for the national award for excellence in the Mahatma Gandhi national rural employment guarantee programme (MGNREGP), by the ministry of rural development.

Source: As mentioned above 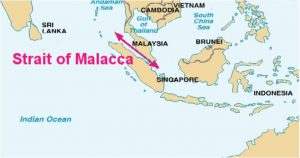 The Bab-el-Mandeb or Mandeb Strait is a strait located between Yemen on the Arabian Peninsula, and Djibouti and Eritrea in the Horn of Africa. It connects the Red Sea to the Gulf of Aden.

The Lombok Strait, connects the Java Sea to the Indian Ocean, and is located between the islands of Bali and Lombok in Indonesia. The Gili Islands are on the Lombok side.

Strait of Malacca: From an economic and strategic perspective, it is one of the most important shipping lanes in the world.

The strait is the main shipping channel between the Indian Ocean and the Pacific Ocean, linking major Asian economies such as India, China, Japan, Taiwan, and South Korea. It was launched in 1997 by the Foreign Ministers of Bangladesh, Bhutan, India, and Nepal (BBIN).

SAARC in 1997 endorsed SAGQ as a sub-regional initiative under SAARC.

The goals of SAGQ are: It is a set of technical standards for e-learning software products.

When India attained Independence in 1947, salt was being imported from the United Kingdom & Adens to meet its domestic requirement.

But today it has not only achieved self-sufficiency in production of salt to meet its domestic requirement but also in a position of exporting surplus salt to foreign countries.

India today is the third largest Salt producing Country in the World after China and USA with Global annual production being about 230 million tonnes.  Apart from sea brine, salt is derived in India from