The Supreme Court has ruled right to privacy is intrinsic to the entire fundamental rights chapter of the Constitution.

The Supreme Court was hearing a challenge to the Delhi high court’s September 23, 2016 order by which it allowed WhatsApp to roll out its new privacy policy but stopped it from sharing the data of its users collected up to September 25, 2016, with Facebook or any other related company.

Arguments against right to privacy as a fundamental right:

The petitioners had contended that the right to privacy was “inalienable” and “inherent” to the most important fundamental right which is the right to liberty.

While the notion of privacy now extends to the digital space, in the wake of increased internet penetration and smartphones, there is an increase of hacking and misuse of digital credentials as well. It is a well-established fact that privacy helps individuals maintain autonomy, and exercise power over information.

However, there are several bottlenecks etched to the concept of total privacy. For instance, in matters of national security and involving high-profile digital crimes needs intervention from the government, however, in matters which are personal to the user such as digital credentials, chat history on instant messaging apps, digital footprint are among facets that cannot be encroached by any other entity, as it would amount to breaching or hacking.

Legacy data is proof that Indian government or private websites do not have the best reputation when it comes to security, which is vindicated by the number of hacks that have ploughed government websites in the past. Besides, there have been several cases where individuals have succeeded in successfully hacked into UIDAI server. This will have a massive impact on Aadhaar-based litigation. A separate Bench of the court will examine the Aadhar issue. This verdict examines the constitutional status of the right to privacy and strengthens the ordinary Indian’s privacy from being invaded. Government cannot be arbitrary and this verdict has paved the way for growth of jurisprudence on privacy rights in India.

The right to privacy, like any other fundamental right, shall be subject to reasonable restrictions. So, what are reasonable restrictions? That shall be a matter of interpretation to be decided on a case to case basis, just as it is done for fundamental rights. The right of privacy is always a legal right. A legal right can always be curtailed or extinguished by the legislature.

In conclusion, what you need to know?

The right to privacy is now a fundamental right which applies to every Indian’s privacy in the actual world and the virtual world. This fundamental right now gives protection to all Indians but it is not an absolute right, as there can be reasonable restrictions for which the government has to establish a procedure. Any state or its instrumentality cannot infringe on the right to privacy. The verdict has ushered in a new era of privacy practice in India. Privacy, as a fundamental right, will get more premium than it did yesterday. This is a giant leap forward – no other Supreme Court judgment has pushed the envelope like this on privacy jurisprudence and no one will ever be able to treat privacy as an inferior right in India.

The Supreme Court’s ruling that held the right to privacy is a fundamental right recognizes a new ground which lights the way to future judgements on the controversial Section 377 of the Indian Penal Code, which criminalizes homosexuality.

With this ruling, the Supreme Court has widened the realm of the right to privacy to include all sorts of personal choices. These include an individual’s choice to travel, to reside and to decide whether or not to terminate a pregnancy. It also protects various aspects of an individual’s intimate life, including their sexual orientation.

The ruling will certainly impact the future course of decisions on Section 377 that criminalizes homosexuality since it was not considered by the courts earlier. The right of personal choices including sexual orientation has today been recognised. 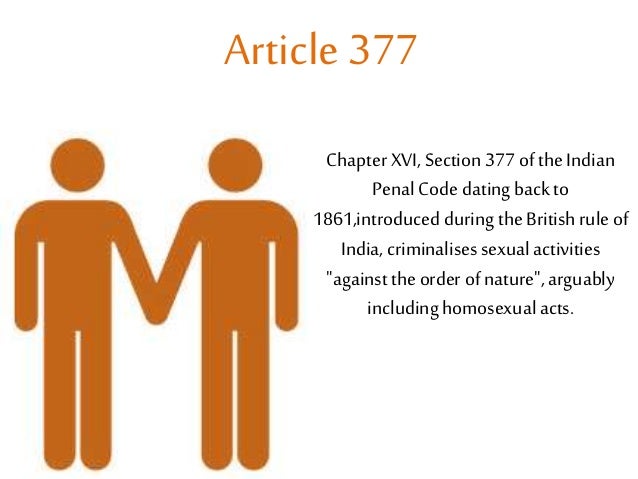 Section 377 of IPC — which came into force in 1862 — defines unnatural offences. It says, “Whoever voluntarily has carnal inter­course against the order of nature with any man, woman or animal, shall be punished with imprisonment for life, or with imprisonment of either description for a term which may extend to 10 years, and shall also be liable to fine.”

The Delhi High Court had in July 2009 de-criminalised consensual homosexual acts in private by declaring as unconstitutional a part of Section 377 of IPC that criminalises unnatural sex, saying “the section denies a gay person a right to full personhood.”

The Supreme Court chose to reverse the verdict in December 2013. Upholding the constitutional validity of Section 377 IPC, the court put the ball in the Parliament’s court, saying it was for the legislature to take a call on the desirability of the controversial provision.

There have been many positive developments in favour of LGBT community on the international front. In May 2015, Ireland legalised same-sex marriage. The country which had decriminalized homosexuality in 1993 became the first country to allow same sex marriage a national level by popular vote.

Those against legalising homosexuality argue that it is against the moral values of the society. What is forbidden in religion need not be prohibited in law.

However, those in favour say, “Morality cannot be a ground to restrict the fundamental rights of citizens. A legal wrong is necessarily a moral wrong but vice versa is not correct. A moral wrong becomes a legal wrong only when its consequences are for society and not just the person/s committing it.”

NITI Aayog has come out with a detailed plan for reforms in the economy, judiciary, regulatory structure and social sectors, in the three-year document to be implemented from 2017-18 to 2019-20.

The action plan suggests a host of reforms to ensure prosperity for all citizens. Some important reforms proposed are as follows:

In May 2016, the Prime Minister’s Office directed Niti Aayog to come up with a 15-year vision document for the period up to 2031-32. This would be complemented with a seven-year strategy starting 2017-18 to convert the vision document into implementable policy and action as part of the National Development Agenda and a three-year draft action plan.

The scheme, Ude Desh Ka Aam Nagrik, which loosely translates as “let the common man fly”, proposes that at least half the seats on every flight should have a fare cap of Rs2,500 per seat per hour of flying.

If the scheme is successfully implemented, the air connectivity to difficult terrains of Jammu and Kashmir, northeast India, Himachal Pradesh, Uttarakhand, Andaman and Nicobar and Lakshadweep will get a major push. The ministry has marked these regions under priority areas.