The largest volcanic region on Earth

Scientists have uncovered the largest volcanic region on Earth – consisting of almost 100 volcanoes – two kilometres below the surface of the vast Antarctic ice sheet. Article 35A comes under scrutiny

The question whether Article 35A, relating to special rights and privileges of the citizens of Jammu and Kashmir, is ultra vires of the Constitution or not is likely to head for a decision before a five-judge Constitution Bench.

The Centre is likely to take a divergent opinion from that of the Jammu and Kashmir government on Article 35A, on the grounds that it discriminates against women who marry outside the State from applying for jobs or buying property, which is in violation of Article 14 of the Constitution.

Article 14 says: “The State shall not deny to any person equality before the law or the equal protection of the laws within the territory of India.”

Article 35A protects certain provisions of the J&K Constitution which denies property rights to native women who marry from outside the State. The denial of these rights extend to her children also.

Article 35A also empowers the State’s legislature to frame any law without attracting a challenge on grounds of violating the Right to Equality of people from other States or any other right under the Constitution.

Section 6 of the Jammu and Kashmir Constitution:

It restricts the basic right of women to marry a man of their choice by not giving the heirs any right to property if the woman marries a man not holding the Permanent Resident Certificate. Her children are denied a permanent resident certificate thereby considering them illegitimate — not given any right to such a woman’s property even if she is a permanent resident of Jammu and Kashmir.

WHY ARE POLITICAL PARTIES & SEPARATISTS OPPOSED TO TINKERING WITH 35A?

The J&K government is also concerned at the reluctance of the Union government to file a counter affidavit in the Supreme Court. Against the backdrop of the escalating protests in Kashmir, this issue could potentially be explosive.

NHRC issues notice to UP government

The National Human Rights Commission (NHRC) has issued a notice to the Uttar Pradesh government, seeking a detailed report on the death of children at BRD Medical College in Gorakhpur in four weeks. 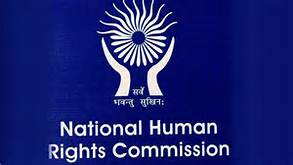 All you need to know about NHRC:

The NHRC is the national human rights institution, responsible for the protection and promotion of human rights, defined by the Act as “rights relating to life, liberty, equality and dignity of the individual guaranteed by the Constitution or embodied in the International Covenants”.

Appointment: The chairman and members are appointed on the recommendation of a 6 member committee consisting of Prime Minister, Speaker of the Lok Sabha, Deputy Chairman of the Rajya Sabha, leaders of opposition in both the houses of parliament and Union Home Minister.

Term: Term of the chairman and members is 5 years or 70 years whichever is earlier. After retirement they are not eligible for further reappointment.

Removal: President has to refer the matter to Supreme Court and if after enquiry Supreme Court holds it right then they can be removed by the President.

UN Secretary General Antonio Guterres is concerned about India’s plans to deport Rohingya refugees from Myanmar. He said that refugees should not be returned to countries where they fear persecution once they are registered.

Minister of State for Home Affairs Kiren Rijiju had told parliament last week that the central government had directed state authorities to identify and deport illegal immigrants, including Rohingyas, who face persecution in the Buddhist-majority Myanmar.

The Home Ministry had said that infiltration of (Rohingyas) from the Rakhine state of Myanmar into Indian territory, especially in recent years, besides being a burden on the limited resources of the country, also aggravates security challenges posed to India.

UN principles of non-refoulement applies in this case. According the these principles, no nation shall expel or return a refugee in any manner to territories where his life or freedom would be threatened on account of his race, religion, nationality, membership of a particular social group or political opinion.

What needs to happen?

The Myanmar Government should immediately end the violent crackdown on the Rohingya and amend or repeal the 1982 Burma Citizenship Law to provide the Rohingya people with full citizenship in the country.

Bangladesh and other governments in Southeast Asia must ensure those fleeing violence and seeking protection, are granted access. Guaranteeing they will not be pushed back or arbitrarily detained and instead that all their rights will be respected.

Pashu Sanjivni component under National Mission on Bovine Productivity scheme was initiated by the Government in November 2016. Under the scheme, as on date 85 lakh milk producing animals have been identified and their data has been uploaded on INAPH data base. Under the scheme, 88 million milk producing animals out of 300 million cattle and buffaloes are being identified using polyurethane tags with 12 digit unique identification (UID) number.

The Securities and Exchange Board of India recently imposed trading restrictions on 331 companies suspected of being shell entities. It is suspected that trading on the shares of these “shell” companies was used as a way to launder black money.

As part of efforts to curb the black money menace, the corporate affairs ministry has already cancelled the registration of more than 1.62 lakh companies that have not been carrying out business activities for long. The ministry is implementing the Companies Act and firms are required to be registered under this law.

The term ‘shell company’ is not defined under the Companies Act, 2013. The Act requires that a company may be set up for any lawful purpose only. Subsequent to incorporation, if a company is found to be formed for fraudulent or unlawful purpose, it is liable for penal action, including for winding up under Section 271 of the Act.

Why is this move being criticised?

SEBI had acted on a list of suspect companies that the Ministry of Corporate Affairs had forwarded after consultation with the Serious Fraud Investigation Office and the Income Tax department. Instead of conducting an independent investigation into these suspect companies, SEBI passed the buck to the exchanges and asked them to impose immediate trading restrictions on the companies.

The government’s resolve to act against dodgy companies, for the sake of bringing business practices under the purview of the law, is indeed warranted. However, on the list of companies closed were also companies with huge market capitalisations.

While the SAT order has brought some fairness to the entire proceedings, SEBI’s action will deal a blow to its credibility among investors as being an effective and unbiased regulatory body. Not surprisingly, investor unease was at least partially evident on the street where stocks witnessed a sharp fall after the order. In order to restore confidence, SEBI and the government must explain the rationale behind their actions.