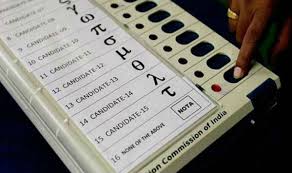 The Supreme Court has refused to stay an Election Commission circular issued in January 2014 that introduced NOTA in the Rajya Sabha elections. The court has, however, issued notice to the Election Commission of India, saying the poll body should be heard in detail as any judicial decision on NOTA may have a ripple effect on elections conducted from January 24, 2014, to the present day.

The Election Commission, in October 2013, issued directions for providing the NOTA option in elections. But then, doubts were raised about its applicability in the Rajya Sabha polls.

NOTA, or ‘None Of The Above’, option appears at the bottom of EVM or ballot paper, below the names of all the contestants. This option allows a voter to reject all the candidates in any election. It was included in the EVMs and ballot papers by virtue of a Supreme Court judgment in September 2013 which directed the Election Commission to “make necessary provision in the ballot papers/EVMs for “None of the Above (NOTA)” option so that the electors who do not wish to vote for any of the candidates can exercise their right not to vote for any candidate without violation of the secrecy of their decision.”

Prior to this judgment, there was a similar provision in which one could refuse all the candidates in the fray and exercise his or her right to vote. To do that, a voter had to go to the Presiding Officer at the polling booth and fill form 17A. This, however, did not allow for anonymity.

Which other countries have such a provision?

According to Association of Democratic Reforms, apart from India, France, Belgium, Bangladesh, Brazil, Greece, Ukraine, Chile, Finland, Sweden, Spain and Columbia are countries where NOTA or similar voting practice is allowed. Few states like Nevada and Texas in the US also allow it. Bulgaria also joined the list in 2016.

Breastfeeding Week is observed in the first week of August to focus attention on the important aspect of promotion and support of breastfeeding. The theme of this year’s breastfeeding week is ‘Sustaining Breastfeeding’. The Ministry of Health & Family Welfare has planned various activities at the national level. Breastfeeding is an important efficient and cost-effective intervention promoting child survival and health. Breastfeeding within an hour of birth could prevent 20% of the newborn deaths. Infants who are not breastfed are 15 times more likely to die from pnuemonia and 11 times more likely to die from diarrhoea than children who are exclusively breastfed, which are two leading causes of death in children under-five years of age. In addition, children who were not breastfed are at increased risk for diabetes, obesity, allergies, asthma, childhood leukemia, sudden infant death syndrome etc. Apart from mortality and morbidity benefits, breastfeeding also has tremendous impact on improved IQ. The National Bank for Agriculture and Rural Development (Amendment) Bill, 2017 to enable exit of RBI from Nabard and increase authorised capital of the development institution six times to Rs 30,000 crore was recently passed by the Lok Sabha.

The Bill seeks to amend the National Bank for Agriculture and Rural Development Act, 1981.

Micro, small and medium enterprises (MSME): The Bill replaces the terms ‘small-scale industry’ and ‘industry in the tiny and decentralised sector’ with the terms ‘micro enterprise’, ‘small enterprise’ and ‘medium enterprise’ as defined in the MSME Development Act, 2006.  Under the 1981 Act, NABARD was responsible for providing credit and other facilities to industries having an investment of upto Rs 20 lakh in machinery and plant.  The Bill extends this to apply to enterprises with investment upto Rs 10 crore in the manufacturing sector and Rs five crore in the services sector.

Under the 1981 Act, experts from small-scale industries are included in the Board of Directors and the Advisory Council of NABARD.  Further, banks providing loans to small-scale, tiny and decentralised sector industries are eligible to receive financial assistance from NABARD.  The Bill extends these provisions to the micro, small, and medium enterprises.

Bhabha Atomic Research Centre (BARC) – Department of Atomic Energy (DAE) has been actively engaged in R&D work on the technology of preservation and hygienization of food and agri-products by radiation.

Unique advantages of radiation processing are:

In irradiation, food products are subjected to a low dosage of radiation to treat them for germs and insects, increasing their longevity and shelf life. Radiation treatment is carried out in dosage recommended by the International Atomic Energy Agency (IAEA) and it neither reduces the nutritional value of food nor spoils their taste and appearance.

In India, according to estimates, post-harvest losses in food and food grains are around 40-50%, primarily due to insect infestation, microbiological contamination, physiological changes due to sprouting and ripening, and poor shelf life.

Government efforts in this regard:

The quantum of horticulture produce in India is huge. Hence, many more facilities are needed. In an attempt to promote innovation and entrepreneurship in agriculture, the government is launching a new AGRI-UDAAN programme that will mentor startups and help them connect with potential investors.

Make in India campaign aims to draw in organizations from around the globe to manufacture and invest in India. The campaign concentrates on facilitating job creation, enforcement to the tertiary and secondary sector, boosting the national economy, making India a self-reliant nation and ensuring that the Indian economy gets international acknowledgement.

Joint Project between NASA and ISRO

ISRO and NASA are working towards realisation of NASA-ISRO Synthetic Aperture Radar (NISAR) mission by 2021.

ISRO and NASA have a framework agreement for cooperation in the exploration and use of outer space for peaceful purposes signed in 2008. Under this framework agreement, ISRO and NASA have executed an implementing arrangement for cooperation in NISAR mission, which is valid until 2034 and provides scope for joint activities on science & applications of NISAR data after the launch.

The Nasa-Isro Synthetic Aperture Radar (NISAR) mission is a joint project between NASA and ISRO to co-develop and launch a dual frequency synthetic aperture radar satellite.

Seeking to make desi GPS – indigenous regional positioning system named as Navigation with Indian Constellation (NavIC) – independent from the US clock system, the Indian Space Research Organisation (ISRO) is all set to sign an MoU with CSIR-National Physical Laboratory (NPL) for time and frequency traceability services.

NAVIC is an independent regional navigation satellite system designed to provide position information in the Indian region and 1500 km around the Indian mainland. It provides two types of services, namely Standard Positioning Services available to all users and Restricted Services provided to authorised users.

It consists of seven satellites. Three of these will be geostationary over the Indian Ocean, i.e., they will appear to be stationary in the sky over the region, and four will be geosynchronous – appearing at the same point in the sky at the same time every day. This configuration ensures each satellite is being tracked by at least one of fourteen ground stations at any given point of time, with a high chance of most of them being visible from any point in India.