“Jiyo Parsi Publicity Phase-2” was recently launched by the government. The scheme aims to fulfil the objective of inclusive growth of the government. The Supreme Court, using its extraordinary constitutional powers, has allowed two companies to withdraw from insolvency proceedings and settle their loan dispute despite the case having been admitted by the National Company Law Tribunal (NCLT).

Is the Supreme Court empowered to do so?

Yes. Article 142 provides that “the Supreme Court in the exercise of its jurisdiction may pass such decree or make such order as is necessary for doing complete justice in any cause or matter pending before it”.

Just seven months after the operationalization of the Insolvency and Bankruptcy Code (IBC), it has been tested by the Supreme Court with its latest judgment. The policy underlying IBC shifts the incentive of the parties from individual recovery actions to collective action. In that context, after a petition has been filed in NCLT, allowing out-of-court bilateral settlement between the borrower and one creditor may contradict that basic objective of collective action.

After the admission of the petition, it acquires the character of representative suit and through publication in newspapers, other creditors get a right to participate in the insolvency resolution process and therefore IBC does not allow the petition to be dismissed on the basis of a compromise between the operational creditor and corporate debtor.

National Company Law Tribunal (NCLT) is a quasi-judicial body that will govern the companies in India. It was established under the Companies Act, 2013 and is a successor body of the Company Law Board.

Gaming: a question of skill

Gaming in India is rapidly gaining acceptance, by both customers and legislators. Although ‘gaming’ in popular parlance has taken on the meaning of playing computer or video games, the term is in fact a reference to competitive activities — like rummy, chess, bridge, and the like — that are not categorised as sports, as well as the betting that is done on them.

Why should betting be included under Gaming?

There are some industry players who believe that betting on sports such as cricket should also come under gaming and be termed as games of skill. Regulating sports betting will bring it into the light and will prevent match-fixing, they argue. The Lodha Committee report, too, recommends this course of action.

How is gaming treated across states in India?

The regulation of gaming in India is fragmented, with each state currently deciding the rules applicable in its jurisdiction, with variations emerging on the definition of gaming, the kinds of games that qualify, and the punishments meted out for indulging in gaming not allowed by law.

What can India learn from other countries?

The U.K. enacted an updated gambling law in 2005 that provided for the creation of a Gambling Commission, which was tasked with crime prevention, the promotion of an open and transparent gaming and gambling industry, and the protection of vulnerable people from the ills and dangers of gambling. The country further updated this legislation in 2014.

There are moral and ethical dimensions involved that have kept gambling and betting illegal so far. It has to be seen if betting can encourage match fixing. The regulatory frame work will have to be pretty strict.

Changes introduced are as follows: Why was the scheme introduced?

The sovereign gold bond was introduced by the Government in 2015. While the Government introduced these bonds to help reduce India’s over dependence on gold imports, the move was also aimed at changing the habits of Indians from saving in physical form of gold to a paper form with Sovereign backing.

Annual consumption of gold in India is in the range of 700-800 tonnes, almost all of which is imported. Of this, approximately 500-600 tonnes is bought by consumers as jewellery for cultural reasons (mainly for weddings). The balance is in the form of gold bars and coins for savings or investment purposes, which is what the Government hopes to convert to paper form so that both are served — investors are happy as long as they earn some returns and capital appreciation at the time of redemption, as well as it helps reduce an equivalent amount of physical gold imports.

So far, SGB has been moderately successful with the launch of eight tranches of these bonds since November 2015, garnering approximately ₹5,000 crore or about 16 tonnes of gold. However, the potential to scale up is huge.

Scientists have developed a super strong, flexible adhesive material inspired by the glue secreted by slugs that sticks to biological tissues – even when wet – without causing toxicity. Slugs secrete a special kind of mucus when threatened that glue it in place, making it difficult for a predator to pry it off its surface. 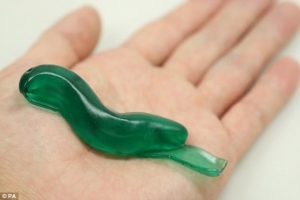 What you need to know about the new bio-glue?

The new material is a double- layered hydrogel consisting of an alginate-polyacrylamide matrix supporting an adhesive layer that has positively- charged polymers protruding from its surface.

Such a high-performance material has numerous potential applications in the medical field, either as a patch that can be cut to desired sizes and applied to tissue surfaces or as an injectable solution for deeper injuries.

Scooping out oil spills made easy

Scientists have developed a simple, cheap and environment-friendly system that can effectively remove crude oil from sea that can pollute and even destroy marine ecosystems. The hydrophobic sorbent developed by scientists can suck up oil and congeal it. What you need to know about the new system?

Scientists developed the hydrophobic sorbent by using a cheap raw material (mannitol) and cellulose pulp as a matrix. (A hydrophobic material automatically becomes oil-loving and takes up oil when it comes in contact with it). Mannitol was converted into a hydrophobic gelator through a one-step process and a solution was made using this compound. Cellulose balls the size of marbles were then dipped in the solution and dried.

It takes only about 30 minutes to two hours from the time of application to scooping out the rigid fibre balls containing congealed oil, leaving behind clean water. Studies found that the sorbent was able to absorb and congeal 16 times its own weight of oil. The absorbed oil can be recovered by applying pressure or fractionated by a simple distillation process.