Sixteen Asia Pacific nations, including India, are discussing in detail norms on e-commerce as part of negotiations on the proposed mega Free Trade Agreement known as the Regional Comprehensive Economic Partnership (RCEP). 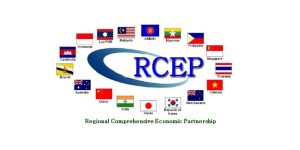 Many RCEP nations including Australia, Japan and China, are pushing for inclusion of a host of elements for ‘Terms Of Reference’ for RCEP negotiations concerning e-commerce. This is with a view to have some binding commitments from the RCEP members on liberalising e-commerce and ensure that the final pact has a separate chapter on e-commerce.

India has been opposing binding norms on opening up the e-commerce sector at the level of RCEP as well as the global level (WTO) talks on grounds including that it (India) is yet to have a comprehensive national policy on the topic. It is also believed that such binding norms would harm development by diminishing policy space, some economists have warned. Also, experts fear RCEP talks could be used by developed countries to get an outcome at the WTO ministerial in Argentina later this year.

The Supreme Court has allowed the Centre to replace the oversight committee set up to supervise the functioning of the Medical Council of India (MCI) with a fresh panel of five eminent doctors. The court had asked the Centre to constitute a panel which would replace the oversight committee set up last year by the apex court to oversee the MCI’s functioning till the government put in place an alternate mechanism. The committee, set up by the court on May 2 last year, was to function for a period of one year or till a suitable mechanism was brought in by the Centre to substitute it.

The MCI was established in 1934 under the Indian Medical Council Act, 1933, as an elected body for maintaining the medical register and providing ethical oversight, with no specific role in medical education.

Get real on Swachh

Despite the most stringent penal provisions in the law against manual scavenging, it continues in parts of India. The recent order of the Madras High Court asking the Centre and the Tamil Nadu government to ensure the strict enforcement of the Prohibition of Employment as Manual Scavengers and their Rehabilitation Act, 2013 points to the malaise.

The Prohibition of Employment as Manual Scavengers and their Rehabilitation Act, 2013:

The Prohibition of Employment as Manual Scavengers and their Rehabilitation Act, 2013, makes it clear that no person, local authority or any agency shall, from such date as the state government may notify, which shall not be later than one year from the date of commencement of this Act, engage or employ, either directly or indirectly, any person for hazardous cleaning of a sewer or a septic tank.

Gujarat retains top slot of states with most investment potential: