NASA is developing the first-ever mission that will deflect a near-Earth asteroid, and help test the systems that will allow mankind to protect the planet from potential cosmic body impacts in the future. The Double Asteroid Redirection Test (DART) – which is being designed and would be built and managed by the John Hopkins Applied Physics Laboratory – is moving from concept development to preliminary design phase. 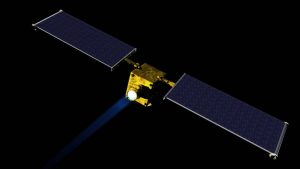 What you need to know about the DART?

The Prevention of Cruelty to Animals (Karnataka Amendment) Bill, 2017, has finally received Presidential assent. With this, all the hurdles for resuming Kambala — the traditional slush-track buffalo race of the coastal districts — are cleared. The Karnataka Legislative Assembly passed the Bill in February 2017 to put the traditional sport out of the ambit of PCA Act. Governor of Karnataka then referred the Bill to the President for his assent. In April, the Union Home Ministry suggested modifications to the Bill and returned it to the State. It wanted the government to modify or omit the phrase “subject to such other conditions as may be prescribed”, which would open the window for inclusion of more such sports.

Kambla in its traditional form is non-competitive with buffalo pairs made to race one after another in paddy fields, which is considered a thanksgiving to the Gods for protecting the animals from diseases.

The Asian Development Bank (ADB) and the Government of India have signed a $220 million loan agreement meant to improve connectivity, transport efficiency, and safety on the State highways of Rajasthan.

ADB, based in Manila, is dedicated to reducing poverty in Asia and the Pacific through inclusive economic growth, environmentally sustainable growth, and regional integration. Established in 1966, it is owned by 67 members – 48 from the region.

US rolls out expedited entry for ‘low-risk’ Indian travellers

The US has started rolling out for India its Global Entry programme which allows for expedited clearance of pre-approved, low-risk travellers.

What you need to know about the Global Entry Programme?

On landing at select airports, the programme members enter the United States through automatic kiosks, instead of queueing up to clear the immigration by meeting an immigration officer.

The Supreme Court has permitted a woman, who is in her 26th week of pregnancy, to abort her foetus that is suffering from severe cardiac ailments.

The order came after the woman and her husband had approached the apex court seeking permission to abort her foetus on grounds of abnormalities which could be even fatal to her. They had also challenged the constitutional validity of section 3(2)(b) of the Medical Termination of Pregnancy (MTP) Act which prohibits abortion of a foetus after 20 weeks of pregnancy.

Abortion in India is legal only up to 20 weeks of pregnancy, under specific conditions and situations, which are defined as:

Who has the right to abort?

According to the IPC abortion falls under ‘Offences Affecting the Human Body’, and provides that causing a miscarriage with or without consent for a purpose other than saving the life of the woman is punishable. The Medical Termination of Pregnancy (MTP) Act in India came into existence in 1971. It was amended in 2003 to facilitate better implementation and increase access for women especially in the private health sector.

India in 88th place in money hoarded in Swiss banks: