Role being played by education in empowering rural society-

Education is the most important instrument for bringing socio-economic, cultural and political changes in rural areas. Government has taken many steps to increase the spread and quality of education in rural areas. Programs like Sarva Shiksha Abhiyan, Mid-day Meal, Beti Bachao, Beti Padhao etc are being implemented to increase the reach of the education. Though there are discrepancies in their implementation and expected output has not achieved, education holds the key for real transformation of rural India.

2) Write a brief note on the MPI (Multidimensional Poverty Index). Critically examine how will future climate change affect the poor and how does one address both poverty and climate change. (200 Words) 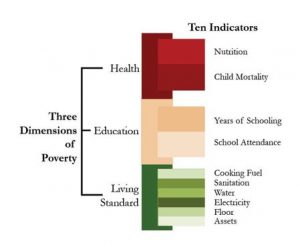 Why is MPI better than the Human Poverty Index (HPI) previously used in the Human Development Report?

The MPI replaced the HPI, which appeared in the HDR from 1997-2009. Pioneering in its day, the HPI used country averages to reflect aggregate deprivations in health, education, and standards of living. It could not identify which specific individuals, households or larger groups of people were poor. The Global MPI addresses this shortcoming by identifying each person as poor-or non-poor based on how many deprivations they face, then aggregates this information into an overall set of intuitive statistics such as the percentage of people who are MPI poor. The MPI can be broken down by indicator to show how the composition of multidimensional poverty differs across regions, ethnic groups and so on—with useful implications for policy.

How future Climate change will affect the poor?

Climate change has been linked to increased frequency and intensity of destructive weather events, such as floods and hurricanes. But the effects of a warming planet on crops may pose an even greater danger, especially for the world’s poor, according to the World Bank.

Agriculture is one of the most important economic sectors in many developing countries like and India where more than half of population is dependent on agriculture for their income and unfortunately it is also one of the most sensitive to climate change given its dependence on weather conditions, both directly and through climate-dependent stressors (pests, epidemics, and sea level rise).

Poor people already spend more income on food and health than other classes. Climate change along with rising prices of food, will also increase the diseases that could drive the households into the poverty again.

Climate change is leading to the frequent droughts and floods, famines and other disaster hazards. Such natural phenomenon’s have more adverse impact on the poor people as their livelihood gets affected easily.

With climate change, availability of fresh water will reduce dramatically along areas with large coastal populations, especially those that are less economically stable, like some regions of South Asia, Latin America etc. Approximately 22 million people faced water scarcity at the end of the twentieth century, and according to projections configured by the IPCC, the number of people likely to endure issues in water sanitation by 2050 is 79 to 178 million.

Climate change hits the poorest people the hardest, those living in vulnerable areas with the fewest resources to help them adapt or recover quickly from shocks. As the effects of climate change worsen, escaping poverty becomes more difficult.

Climate change also hampers the efforts and initiatives to reduce the poverty. It has been observed that climate change is pushing people who have just came out of poverty.

How should address the both poverty and climate change?

As the impacts of climate change worsen, it will become harder to eliminate poverty. That leaves a narrow window for ending extreme poverty and putting in place the safety nets that can keep poverty at bay while countries also work to lower their emissions toward net zero. The work underway right now, with a goal of ending extreme poverty by 2030, can help governments lead the way on combating climate change while also working to improve the lives and futures of the least well-off in their countries.

3) In your opinion, how should India resolve its boundary stand-off with China at the Doka La tri-junction with Bhutan? Critically comment. (200 Words)

China is attempting to build a motorable road in an area claimed by Bhutan. Chinese attempt has resulted in a face-off between the forces of the two countries. India and China have beefed up deployment of forces at the Sikkim-Bhutan-Tibet tri-junction as part of the ongoing stand-off between the armies of the three countries.

India’s Defence Minister said that after having been pushed back by the Chinese soldiers, the Bhutan Army sought help from its Indian counterpart. India is in a security arrangement with Bhutan to provide protection to its borders. The Indian Army entered the area to honour the bilateral arrangement.

Doko La plateau is strategically significant. It overlooks the Chumbi valley which has two important passes – Nathu La and Jelep La – to connect India and China. The plateau is contested by both Bhutan and China. Doko La plateau makes survey of Indian territory up to the Siliguri corridor easy. This also brings the security of Sikkim under threat. How should India resolve the boundary dispute with China at Doka La tri-junction?

Bhutan’s sovereignty must be maintained as that is the basis for the “exemplary” ties between New Delhi and Thimphu. The Indian government has been wise to avoid escalation in the face of China’s aggressive barrage, but that should not stop it from communicating its position in more discreet ways.

Israel is known as the land of innovations in water management, be it drip irrigation, recycling of urban wastewater for use in agriculture or desalinization of seawater for drinking purposes.

Lessons for India from Israel in water management-

Recycling of water and use of technologies-

An integrated approach to solving India’s emerging water crisis, involving government to government, governance to business and business to business interactions between Indians and Israeli agencies has much to offer not only to the two countries but also to several countries in Africa which are starved of water.

5) In the light of GST being hailed as a reformatory step, it’s also demanded that India’s budget process be reformed too. In your opinion, how the budget can be updated for a post-GST India? Discuss. (200 Words)

Introduction :- The goods and services tax (GST) is finally being implemented, so perhaps now is the time to reflect on how the budget can be updated for a post-GST India. Just as the GST aims to create national uniformity in taxation, rethinking budgets can also push efficiency.

But, there are some bad outcomes too. Combining ministerial budget, is essentially promoting dictatorship of the cabinet. The ministries will have no freedom to form their own policies. They will have no fund at their disposal to moot innovative ideas and act on them.

Conclusion :- With such historic reformative steps of GST other things aligned to it must also be reformed in order to get benefitted from it in a broad manner. Also reforming aligned process and things will make the GST a long lasting solid reform.

6) Three of India’s most prominent challenges are: a crisis in the agricultural/rural economy, a need for much faster and more widespread generation of jobs and livelihoods, and rapid degradation of the environment. Do you think more localisation and empowerment of local bodies would address these challenges effectively? Discuss. (200 Words)

Introduction :- India is facing many challenges, as are countries all around the world. India has always followed a top down approach to planning and implementation of policies since independence which has not yielded any significant result so now emphasis is being put on local bodies to solve the problems at their roots.

The three above mentioned problems can be looked in holistic way as follows :

Illustrative example :- Irrigation through the centralized planning of the dams and canal for agriculture failed to serve need ( On other hand) we have tradition to build local ponds , kunds , ground tanks etc. This helped to save environment, as it do not pose any ecological destruction what dam construction pose while it also help to prevent forest fires, better water availability for crops, also generated employment opportunities for local people.

Conclusion :- The economy, society and ecology are integrated in a system. Changes in any one of these components will affect the others. Components of systems must coordinate with each other for the system to remain healthy. Moreover, there must be harmony amongst the components wherever they come together for the whole system to remain healthy. It can be best done at local level as their complexity band problems goes on increasing at higher levels hence local bodies role become crucial.

7) It is said that developments on the energy front in Australia and Qatar highlight India’s need to diversify sources and develop an integrated systems approach to planning. Do you agree? Examine. (200 Words)

Developments on energy front in Qatar :-

Development on energy front in Australia :- Need to diversify the sources and develop and integrated approach to planning :- 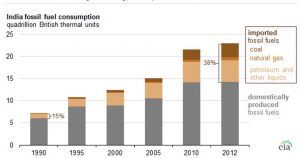 Australia is indeed confronting the consequences of siloed energy sector planning. Three separate developments have led to the present situation. The gas producers committed the bulk of their production to the export market through LNG. Second, under pressure from the “greens” and in the expectation that renewables (solar and wind) would pick up the slack, the government encouraged the closure or mothballing of a number of base load thermal power plants. And third, the transmission and distribution system was not able to absorb and handle the surge and variability of electrons from renewable sources.

Topic:  Human Values – lessons from the lives and teachings of great leaders, reformers and administrators; Contributions of moral thinkers and philosophers from India and world.

8) Write a note on Gandhiji’s philosophy on education and comment on its relevance today. (150 Words)

Introduction :- When we talk about Gandhiji, automatically certain ideals come to our mind i.e. truth, nonviolence, simplicity, love for all, leadership, dignity of labour and implementation or practicing ideas rather than just propagating them. These ideals or qualities reflected to educational philosophy of Gandhiji.

What is the relationship between the rising expectations and emerging globalisation on the one hand and the Gandhian philosophy of education on the other hand?