Innovate in India (i3)

In a bid to create a globally competitive biopharmaceutical industry that addresses the country’s major concerns around barriers to affordable healthcare, innovate in India (i3) program has been launched. 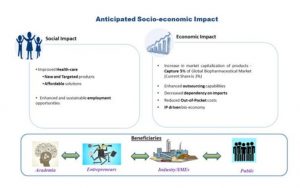 What you need to know about innovate in India (i3)?

It is a 250 million USD program of the Department of Biotechnology (DBT) and Ministry of Science & Technology in collaboration with World Bank. It will be implemented by Biotechnology Industry Research Assistance Council (BIRAC), a Public Sector Enterprise, set up by DBT.

It is a first- of-its-kind mission that brings together industry and academia to promote entrepreneurship and indigenous manufacturing in the biopharmaceutical sector.

This Mission aspires to create an enabling ecosystem to promote entrepreneurship and indigenous manufacturing in the sector. The programme will specifically focus on the development of new vaccines, bio-therapeutics, diagnostics and medical devices to better address the rising burden of diseases in the country.

It will also bring isolated Centres of excellence together, enhance regional capabilities and strengthen the current bio-clusters network in terms of capacities as well as quantity and quality of output.

Significance of this program:

Paper 3 Topic: Linkages between development and spread of extremism.

The 31st anniversary of the signing of the historic Mizo peace accord between the Union government and the erstwhile underground Mizo National Front (MNF) was celebrated on 30th June in Mizoram. What you need to know about Mizo peace accord?

Under the Accord, the government agreed to grant full statehood to Mizoram, along with its own High Court. A university was proposed. The Accord promised constitutional protection for Mizo religious and social customs, and laws of the Mizo people. Mizo was notified as an official Indian language. The MNF agreed to break all contact with other insurgent groups in the Northeast.

A new ransomware going by the name Petya has had a major impact on the operations in India. Cyber security experts claim India’s critical infrastructure remains vulnerable to such attack even as the country’s largest container port – Jawaharlal Nehru Port Trust (JNPT) – has been affected, prompting authorities to contain the disruption in emergency mode. Petya relies on the same NSA-leaked EternalBlue exploit that was used by WannaCry, but that’s only one of its strategies to burrow itself across computers.

How is Petya different from Wannacry?

Unlike Wannacry, Petya does not encrypt individual files, but overwrites the master boot record and encrypts the master file table, thus rendering the system inoperable until the ransom has been paid.

A piece of malicious software which takes control of your system and files. Upon taking over, it applies encryption on those files and asks for money for a key that can restore the files. The ransomware often scrambles file names and changes their extension.

India has contributed $100,000 to a UN fund to help developing countries actively participate in the discussion of tax issues, becoming the first country to make the contribution. What you need to know about the UN Tax Fund?

The UN Tax Trust Fund aims to support the work of the Committee of Experts on International Cooperation in Tax Matters (the UN Tax Committee).

The UN Tax Committee, a subsidiary body of the UN Economic and Social Council (ESOSOC), has provided guidance on current issues such as double taxation treaties, transfer pricing (profit shifting) taxation of the extractive industries and taxation of services.

The committee also provides a framework for dialogues with a view to enhance and promote international tax cooperation among national tax authorities, while making recommendations on capacity-building and the provision of technical assistance to developing counties and countries with economies in transition.

The Addis Agenda provides a global framework to ensure the effective mobilisation of resources at the national and international level for sustainable development. Implementation of the Addis Agenda supports the implementation of the Sustainable Development Goals (SDGs) and is an integral part of the 2030 Agenda for Sustainable Development, the historic and transformational agenda that countries unanimously adopted in 2015.

India’s First Blood Bank for Cattle to Come up in Odisha:

Times when the Parliament convened for a session at midnight:

The midnight session of Parliament to launch the goods and services tax (GST) marked a first in India’s history. While Parliament was convened for a midnight session several times in the past, all those occasions were celebratory in nature. It’s the first time that a session has been convened to mark the implementation of a government policy, the GST.

Midnight sessions in the past: