Role of women in sustainability sector-

“Women have a vital role in environmental management and development … and are therefore essential to achieve sustainable development.” The present lack of women’s participation in most policy-making signals a gap in the resources devoted to women. More balanced and effective approaches could be developed if international climate change negotiation processes as well as national climate policies considered gender aspects.

Topic: Effect of policies and politics of developed and developing countries on India’s interests, Indian diaspora

2) Why is Qatar isolated in the West Asia? Especially, discuss the role of US in this issue. (200 Words)

A longstanding war of words between Saudi Arabia and its oil and gas-rich neighbor Qatar has just exploded into open diplomatic warfare, threatening the US-led fight against ISIS and setting off a new wave of instability in the Gulf region.

Reasons for the Qatar’s diplomatic crisis- 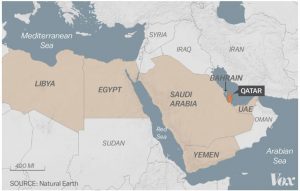 The new rift in the Persian Gulf is in and of itself a big deal — it’s already being interpreted by some observers as the biggest diplomatic crisis in the region since the Gulf War in 1991. But the consequences will ripple beyond the region’s internal politics and seriously imperil US military operations in the region. Thus international institutions like UNO should take a lead role in diffusing the situation and to ensure that Saudi Arabia does not bully her neighbor as like Yemen.

Topic: Effect of policies and politics of developed and developing countries on India’s interests, Indian diaspora

India and the European Union continue to struggle to conclude a bilateral Free Trade Agreement even a decade after the negotiations were first launched in 2007. Germany is pushing for the conclusion of the agreement. With the forces of globalisation in a seeming retreat, India and the European Union should “make it a point to speak up for free trade. And look for a free trade agreement,” suggested Germany’s ambassador to India, Martin Ney, recently.

FTA between India and EU has remained deadlock since 2013 because of following reasons:-

How the judgement on EU-Singapore affect the India-EU free trade talks?

The FTA between EU and Singapore had included the provision of Investor-State Dispute Settlement (ISDS) which gives investors a choice between bringing a dispute against a host state before the national court of the country where the investment has been made and submitting the dispute to international arbitration.

The Bilateral Trade Investment Agreement will be very significant for India-EU ties as this will be the first Free Trade Agreement for India not merely focused on the liberalisation of trade but also of investment. The conclusion of this agreement will be important not only for India’s further integration into the global economy but also to a give a boost to India-EU ties, which have failed to achieve their full potential.

A pressurized heavy water reactor (PHWR) is a nuclear power reactor, commonly using unenriched natural uranium as its fuel, that uses heavy water (deuterium oxide D2O) as its coolant and moderator. The heavy water coolant is kept under pressure, allowing it to be heated to higher temperatures without boiling, much as in a typical pressurized water reactor. While heavy water is significantly more expensive than ordinary light water, it yields greatly enhanced neutron economy, allowing the reactor to operate without fuel enrichment facilities (mitigating the additional capital cost of the heavy water) and generally enhancing the ability of the reactor to efficiently make use of alternate fuel cycles. Nuclear energy stands as one of the cleanest sources of energy as it does not generate any greenhouse gases and could help India to meet its ever-increasing need of electricity generation.

Unlike other renewable energy sources like wind, solar that depend on the weather conditions, nuclear energy offers stable and reliable source of energy all-round the year. The fluctuations in the electricity production are minimum.

As predicted by government that around 34000 jobs will be created by implementing this plan.

India can prove its technical superiority by indigenously making these reactors and in the future can take up projects in other countries as well.

This would lead to a huge boost to Make-In-India initiative that could be followed in other sectors too.

A widely cited study by three analysts from the University of California, Berkeley, found that nuclear power created only 0.14 job-years per gigawatt-hour of electricity produced. In contrast, solar photovoltaic sources were more than six times as labour intensive, creating about 0.87 job-years per gigawatt-hour of electricity.

Both Areva and Westinghouse had entered into agreements with the Indian government to develop nuclear plants and both have went bankrupt in their respective nations.

Thus both the merits and demerits of the government’s decision shows that considering the availability of cheap renewable energy and high safety and environmental hazards from nuclear waste, it would be unfeasible to invest such high financial resources in the PHWRs.

5) What are the criticism made against GM Mustard by critics? Also discuss justifications given by scientists in favour of GM Mustard. (200 Words)

The regulator of the genetically modified crops has given the green signal for commercial cultivation of GM mustard in the country. In a submission to the Environment Ministry, Genetic Engineering Appraisal Committee has given a positive recommendation but with certain conditions. With the GEAC nod, the GM mustard developed by the Delhi University gets closer to become India’s first edible GM crop. Several groups are opposing the GEAC’s decision as it might affect allied agricultural activities, health of the people etc. The Centre for Genetic Manipulation of Crop Plants (CGMCP), Delhi University South Campus, had submitted an application to the GEAC for the environmental release of GM mustard (Brassica juncea) hybrid DMH-11 and the use of parental events (varuna bn 3.6 and EH2 mod bs 2.99) for the development of a new generation of hybrids.

Criticism against the GM mustard-

Justification given by scientists in favor of GM mustard-

Agriculture is a state subject therefore, it is important for the Centre to take into consideration the views of State Governments as well. It is expected that the Supreme Court will ensure protection of Indian consumers and farmers as giving a nod to GM mustard will pave the way for clearance to other GM crops as well whether the impact is good or bad.

The Indian Space Research Organisation has crossed a significant milestone with the successful developmental flight of the country’s heaviest Geosynchronous Satellite Launch Vehicle, the GSLV Mark-III. This is the first time a satellite weighing over 3.1 tonnes has been launched from India to reach the geostationary orbit about 36,000 km from Earth.

All of these developments combine to make it one of the most critical flights in Isro’s history. Although the space technology frontier has moved on, promising to keep Isro engineers busy for a long time, GSLV Mark III is the culmination of all that Isro initially set out to do when first set up in the 1960s. When fully ready, it would give Isro self-reliance and the ability to put any satellite into any orbit.