Ministry of Housing and Urban Poverty Alleviation has sanctioned 1,00,537 more houses for urban poor under Pradhan Mantri Awas Yojana (Urban) with an investment of Rs.4,200 cr taking the total investment so far approved to Rs.1,00,466 cr. This is 307% more than the investment approved of Rs.32,713 cr during 2004-14 for affordable housing in urban areas. A shrinking home for endemic birds

According to a study by IUCN experts, 17 Western Ghats species have smaller ranges than what was thought earlier. 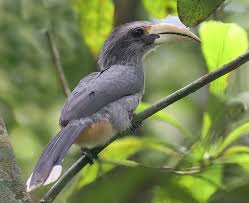 These species are in danger because as per the IUCN guidelines, ‘less vulnerable’ species receive a lower conservation focus. As per the act, every State Government shall, by notification, constitute a State Food Commission for the purpose of monitoring and review of implementation of this Act.

As passed by the Parliament, Government has notified the National Food Security Act, 2013 on 10th September, 2013 with the objective to provide for food and nutritional security in human life cycle approach, by ensuring access to adequate quantity of quality food at affordable prices to people to live a life with dignity. The Supreme Court has asked the government to frame a statutory law to regulate the flow of public money to the NGOs.

Why a law in this regard is necessary?

CBI records filed in 2016 in the Supreme Court had shown show that only 2,90,787 NGOs file annual financial statements of a total of 29,99,623 registered ones under the Societies Registration Act.

The Ministry of Rural Development had framed the accreditation guidelines to regulate “manner in which the VOs/NGOs, which are recipient of grants, would maintain their account, the procedure for audit of the account, including procedure to initiate action for recovering of the grants in case of misappropriation and criminal action.”

Some of the important guidelines are as follows: What you need to know about this experiment?

A fluid environment is critical for foetal development. The foetus — breathing liquid, as it would in the womb — lies in a clear-plastic sack filled with a synthetic amniotic fluid. It is designed to continue what naturally occurs in the womb.

Significance of this experiment:

The new system mimics life in the uterus and could, if approved for human use, dramatically improve the odds. This could help extremely premature babies avoid death or life-long disability.

The Jammu & Kashmir High Court has come down heavily on authorities for failing to preserve the famous Dal Lake.

The court has ordered a slew of measures to contain the ever growing pollution and encroachments in and around the waterbody. These measures are as follows:

The annual report of the U.S Commission on International Religious Freedom released recently said that religious tolerance and religious freedom continued to deteriorate in India in 2016.

Important observations made by the report: